It has been a very successful year for Pacifico Minerals Ltd (ASX:PMY) with its Sorby Hills lead-silver-zinc project in Western Australia progressing well, and lead and silver particularly performing strongly in terms of commodity price appreciation.

During the same period the price of silver has increased from about US$14.50 per ounce to US$18.00 per ounce, also representing a gain of 25%.

The strengthening commodity prices and the group’s operational success is reflected in the group’s share price performance which has more than doubled since May.

This has resulted in the global resource increasing by 20% to 36 million tonnes at 4.7% lead equivalent which incorporates a 39 g/t silver component.

There was also a 53% increase in the total indicated resource, and it now stands at 16.6 million tonnes at 4.8% lead equivalent.

Management believes that the increase in indicated resource may support an increase in mining rate to be used in the optimised prefeasibility study expected to be completed in the March quarter of 2020.

In discussing these latest developments and their relevance in terms of the upcoming PFS, managing director Simon Noon said, ‘’Phase II drilling targeted the Omega and B deposits, aiming to increase resources in the Indicated category.

‘’The boost to Indicated Resources from just 6,000 metres of infill drilling is exceptional.

‘’The main objective was to grow and increase confidence in the Mineral Resource to underpin an increase in the mining rate and test the grade assumptions to be modelled in the upcoming Optimised PFS.

‘’This MRE update has done precisely that and more.”

The improved geological and analytical data which have supported the updated Sorby Hills MRE has highlighted two additional aspects of the deposit that are likely to have a significant impact on the planned Optimised PFS.

Firstly, the infill drilling and the geological understanding through greater data density has shown that Inferred Resources have a high conversion rate to Indicated Resources through a tightening of the drill hole spacing.

In addition, extension drilling also allows resources to be increased because of the predictable strata-bound nature and geometry of the mineralisation.

Further, the tonnage, grade and metal content shows that the mineralisation is only marginally susceptible to a significant change in cut-off grade.

Management noted that even with an increase in the cut-off grade for lead to 2.5%, the resource retains nearly 85% of the metal content despite a 35% drop in the tonnage.

The relevant data is illustrated in the following graph, and Noone highlighted that this demonstrates the excellent resilience of the project. 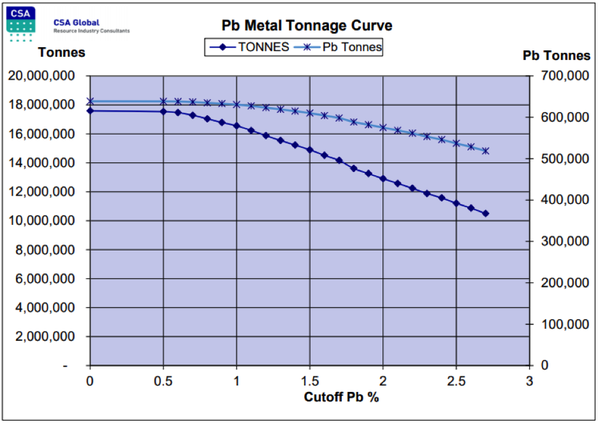 Pacifico will use these findings to further refine its targeting and exploration drilling to grow the high-grade zone of mineralisation which could improve the project economics.