As Pacifico Minerals Limited (ASX:PMY) continues its new phase of metallurgical testing to support the optimised prefeasibility study at the Sorby Hills lead-silver-zinc joint venture project in Western Australia, management provided an update, highlighting the significant progress made during the three months to 31 December, 2019.

This was an important period for the company as it achieved a 20% increase in the global resource at Sorby Hills.

This included a 53% increase in the total indicated resource to 16.6 million tonnes at 4.8% lead equivalent and 0.4% zinc through conversion of the Inferred Resource.

The total resource now stands at 36 million tonnes at 4.7% lead equivalent and 0.5% zinc.

This significant update of the Mineral Resource Estimate came on the back of a second highly successful drilling program.

Phase II drilling targeted the Omega and B deposits, aiming to increase resources in the Indicated category.

The boost to Indicated resources from just 6,000 meters of infill drilling was viewed by management as exceptional.

The company’s other main objective was to grow and increase confidence in the Mineral Resource to underpin an increase in the mining rate and test the grade assumptions to be modelled in the upcoming Optimised PFS.

The updated MRE has highlighted two aspects that are likely to have a significant impact on the planned Optimised PFS.

Firstly, Inferred Resources have a high conversion rate to Indicated status through a tightening of drill hole spacing, and extension drilling allows Resources to be increased because of the predictable strata-bound nature and geometry of the mineralisation.

Also, mineralisation is only slightly susceptible to a significant change in cut-off grade as shown below. 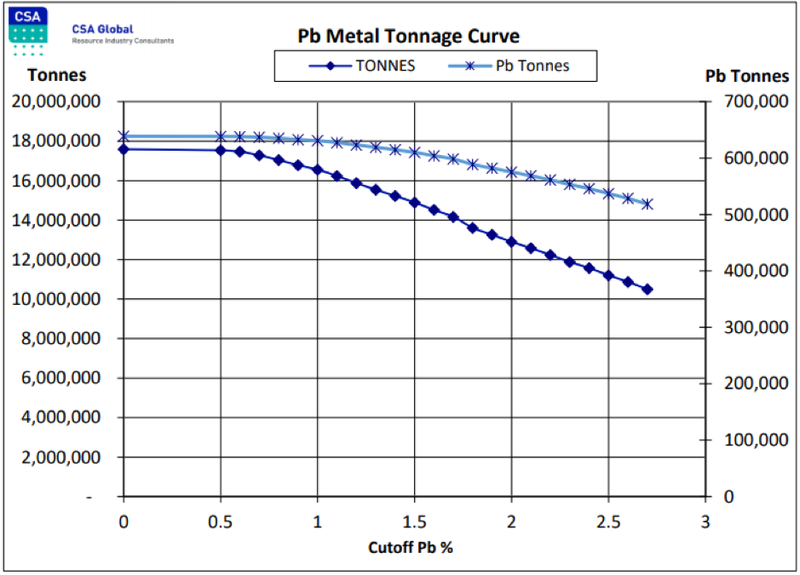 At an increased cut-off grade for lead to 2.5% lead the resource retains almost 85% of the metal content despite a drop in tonnage by 35%, demonstrating the resilience of the project.

Pacifico will use these findings to further refine targeting and exploration drilling to grow the high-grade zone of mineralisation to potentially improve project economics.

All drill holes were logged and sampled during the quarter.

Logging and pXRF testing of rock chips provided a qualitative guide to mineralisation and indicated that significant intersections were obtained, and assay results are imminent - a potential near-term share price catalyst.

Field observations were indicative of a successful drilling campaign that is likely to support further conversion of Indicated and Inferred Resources to higher classifications and to replace Inferred Resources while building on the potential of the discovery of new deposits in the west.

As well as making good progress on the exploration front, Pacifico finished the quarter with cash of $3.8 million.

This received a further boost following the end of the quarter with its joint venture partner Henan Yuguang contributing approximately $870,000 as its share of exploration expenditure.