Pacifico plans updated Resource for as soon as September

The drilling campaign was undertaken between May and July 2019 with the intention of increasing Indicated Resources ahead of an update to the Mineral Resource Estimate (MRE) planned for September/October 2019.

The updated MRE, recently improved metallurgical testwork results, and new mining studies will aim to enhance the economics and improve confidence of an upcoming optimised PFS.

Results received from 29 of the 75 holes completed during the Phase II drilling campaign have returned impressive intersections from shallow depth.

The remaining assay results from phase 2 drilling are expected in the coming weeks.

As a backdrop, after completing the acquisition of a 75% interest in the Sorby Hills Project in late 2018, Pacifico carried out a Phase I drilling program that significantly increased the size and confidence in the global MRE.

The PFS estimated capital expenditure of approximately $95 million to develop the mine, with a 16-month payback and a pre-tax NPV8 of $243 million.

Importantly the PFS only considered resources in the indicated category (10.8 million tonnes of Indicated Resources with a grade of 5.1% lead equivalent.

In an environment of strong silver prices, interest in Pacifico is likely to escalate, and this is evidenced by recent share price activity that has seen its shares double since July.

The results of the Phase II drilling program are expected to materially increase Indicated Resources within the next MRE, subsequently underpinning the upcoming optimised PFS.

Management was particularly impressed with results received from the B deposit which indicated major shallow (from 10 metres) extensions of the indicated resource area which remains open to the north and south, and it is considered likely to link up with the A deposit as indicated below. 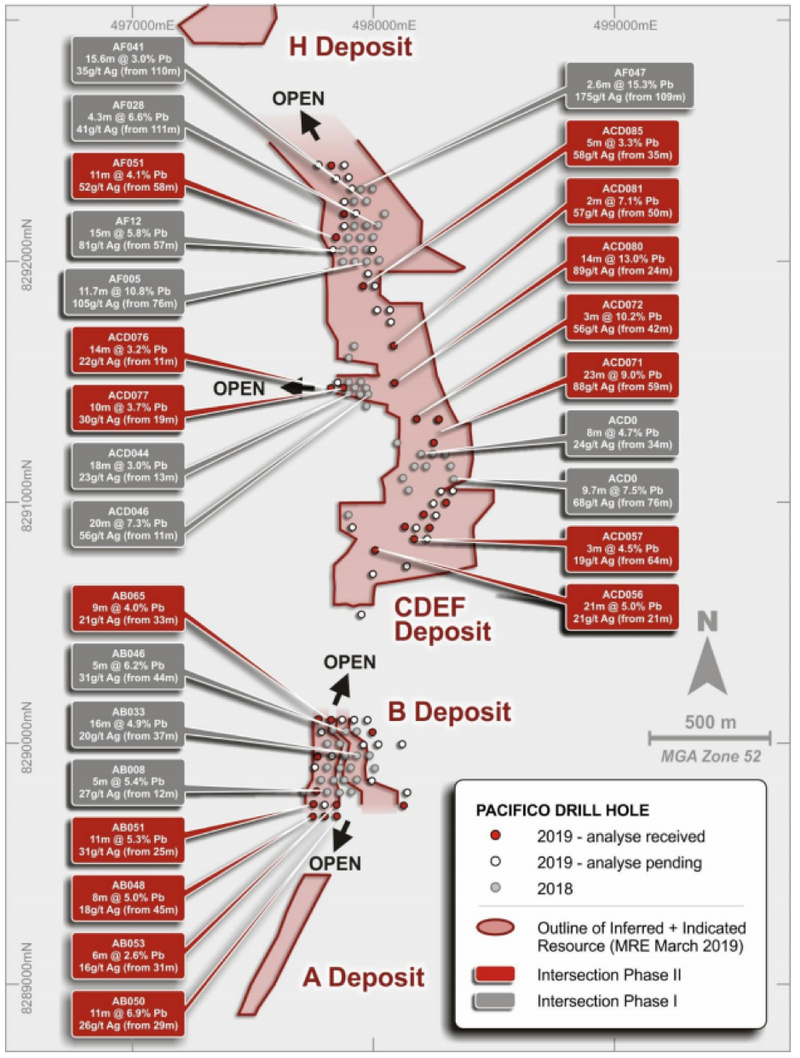 In parallel with advancing its mining and metallurgical studies, Pacifico plans to conduct further drilling in 2020 to continue expanding the Indicated Resource of the B and CDEF deposits, and convert Inferred Resources at the A, H, I, Alpha and Beta deposits to Indicated Resources.

Other drilling targets include extensions to the zinc dominant mineralisation at the Alpha Zinc Deposit and targets outside the defined deposits for lead and zinc, as well as silver.

It is expected that the deposit size at Sorby Hills will continue to grow significantly as extensions and other targets outside of the main defined deposits, based on both historical and Pacifico drill programs, are drilled and added to the resource base.