Pacifico owns a 75% interest in the Joint Venture with the remaining 25% interest held by Henan Yuguang Gold and Lead, the largest lead smelting company and silver producer in China.

Discussing the company’s achievements to date and the upcoming drilling campaign, Pacifico’s managing director, Simon Noon said, “Following the exceptional results of the Phase I drilling program, we are excited to undertake follow-up drilling.

“This drilling program represents another significant investment by Pacifico and Henan Yuguang and aims to move a portion of the resource to an Ore Reserve to enable planning for a future mining operation - 2019 is the most important and exciting year in the company’s history.”

Following Phase II, a further Mineral Resource Estimate (MRE) update will be carried out to support an optimised Pre-Feasibility Study (PFS) by the December quarter of 2019 ahead of completion of a Definitive Feasibility Study (DFS) in 2020.

Phase I drilling results confirmed that C, DE, and F deposits as outlined below are linked and can now be referred to as a single deposit with a strike length of 1.7 kilometres.

In addition, the Phase I drilling results underpinned updates to the MRE and PFS.

The updated MRE completed in March 2019 resulted in a 123% increase in the tonnage of Indicated Resources to 10.8 million tonnes of 5.0% lead equivalent.

As indicated below, the updated PFS confirmed that Sorby Hills is a high-quality, high-margin base metals project and is strongly positioned for development. 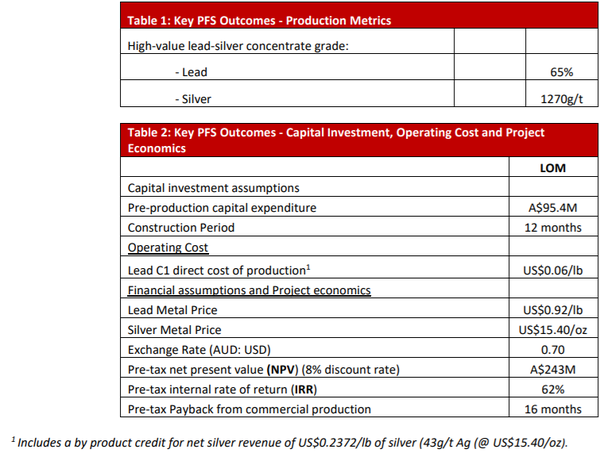 As well as the consistent return of assays from drilling results between June and July, Pacifico is also undertaking metallurgical test work, ore sorting and optimisation studies, the results of which could point to improved commercial viability regarding the Sorby Hills Project.

The results of these initiatives may well provide share price momentum during that period.

In the December half of 2019, the updated Mineral Resource Estimate could have a significant impact on the company’s share price, and given that the optimised prefeasibility study may indicate improved financial outcomes, it is also an event to monitor.