As PMY announced in an update this morning, it has two drill rigs operating at Sorby Hills to accelerate the infill and expansion drill campaign and to support the forthcoming updated pre-feasibility study (PFS), which is scheduled for early 2019.

To date, 41 holes have been completed for 2130 metres, with visual geological logging confirming the presence of lead mineralisation in the form of galena and from as shallow as 14 metres from surface.

Initial assay results are anticipated for late November, with further results expected to flow through to December.

Results are expected to boost confidence in the existing Mineral Resource Estimate of 16.5 million tonnes at 4.7% lead, 0.7% zinc and 54 g/t silver.

To support the drill campaign, PMY has characterised and ranked the deposits within the current Mineral Resource by grade, depth from surface and potential to increase the current Resource base that will underpin a revised PFS next year.

The current deposits were ranked by their likely economic performance and a subset of which were chosen for the next phase of resource drilling, which kicked off in mid-October.

Based on this ranking, a focused drill program has been prepared with the aim of extending the existing Resource and converting Inferred resources to the Indicated category for deposits B, C, DE, F and I.

Areas selected for drilling are generally areas of the current Inferred Mineral Resource or zones immediately adjacent that could reasonably be expected to be incorporated into an updated PFS.

Areas selected for initial drilling have been reviewed over the past months by CSA Global Pty Ltd. Beyond the high-priority infill and extensional drill areas, CSA Global highlighted the exploration potential at Sorby Hills outside of the currently defined resources where several ore bodies remain open along strike and warrant follow up drilling (A, H, Alpha and Beta).

Initial assay results are expected over the coming weeks and will be reported in batches as they become available.

PMY is also undertaking additional metallurgical testwork based on fresh diamond drill core derived from this campaign to further assist in optimising the metallurgical recoveries and to confirm the concentrate specifications to support future off-take discussions. 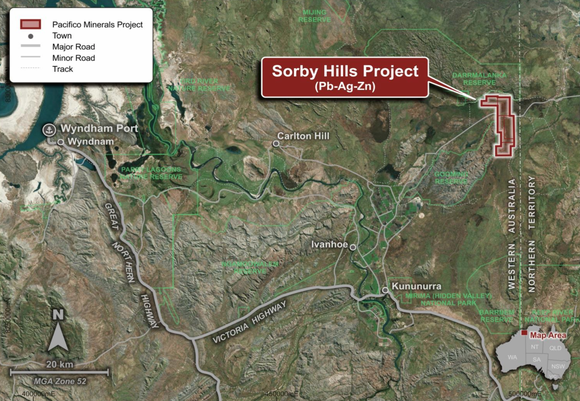 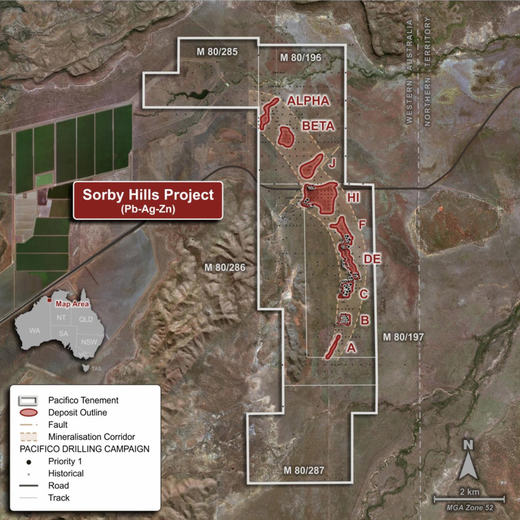 PMY's joint venture partner in the Sorby Hills Project is Henan Yuguang Gold and Lead Co Ltd (Henan Yuguang), which has a 25% stake in the project. Henan Yuguang is the largest lead smelting company in China.

Moving towards the upcoming PFS, Pacifico is working alongside Henan Yuguang to increase confidence in the Resource Estimate, and to optimise the design of the processing plant in order to produce a simple, clean concentrate.