Polymetallic junior, Pacifico Minerals (ASX:PMY), has released its quarterly for the December 2018 quarter, showing strong progress across its exploration activities.

In October last year, PMY completed the acquisition of its 75% interest in the Sorby Hills JV Project with Henan Yuguang (China’s largest lead smelting enterprise) owning the remaining 25%. PMY and Henan Yuguang contribute proportionately to expenditure of development costs on the project.

The project site is located 50km northeast of Kununurra in Western Australia.

Since the acquisition, PMY has worked closely with Henan Yuguang to update previous technical studies. This was done to increase the confidence in the resource estimate, undertake metallurgical testing, optimise the design of the process plant, and complete a pre-feasibility study which envisages mining, processing and exporting base metal concentrate from the Port of Wyndham, which is 140km from Sorby Hills.

Phase 1 of a 12,000m drill campaign was completed during the quarter, which focused on B, C, CD link, D, F and I deposits (as shown below). 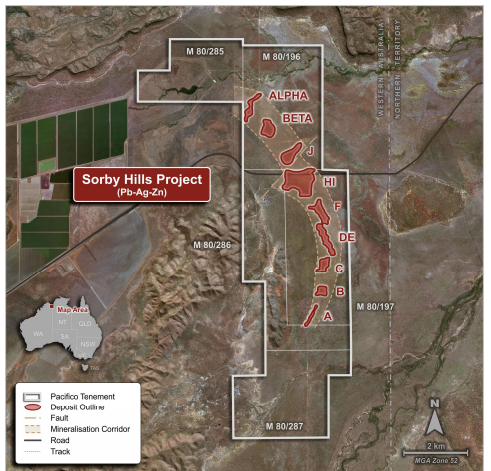 The aim of this program was to increase the proportion of Indicated Resources within the global 16.5Mt at 4.7% lead, 0.7% zinc and 54 g/t silver resource.

A total of 3,906m of RC and 1,466m of diamond drilling was completed during the quarter. Logging completed to date suggests strong visible lead mineralisation in many of the holes. A revision of the geological model based on an evaluation of the company’s drill data indicates potential significant extensions to mineralisation that can be tested in the upcoming Phase 2 drilling campaign (planned for April this year).

In addition to the expected lead intersections, significant amounts of sphalerite (zinc sulphide) have been observed in the drill core.

An updated Mineral Resource estimate will be prepared during February, and will incorporate results from the Phase 1 infill and expansion drilling.

The following activities will be executed at Sorby Hills:

PMY acquired the Sorby Hills Project to refocus on working toward the development of near-mine-ready projects.

This strategy is well-timed, as infrastructure in the East Kimberley has improved greatly over recent years. A sealed road now leads to the project and hydro power from the nearby Argyle Dam is also available. In addition, the Wyndham Port provides a shipping option within close proximity for metal concentrate.

The site has undergone a public environmental review and has received approval for development.

Results from Phase 1 drilling (which were completed in December last year) and the planned Phase 2 drilling will be integrated with the existing JORC (2012)-compliant Mineral Resource Estimate. Detailed technical studies will assess the possibility for improvements in infrastructure and modern mineral processing technology to reduce capital and operating costs.

All of the above will form part of the PFS, which is expected to be completed by the end of June.

During the quarter, managing director, Simon Noon, was invited to China to visit the head office of 25% JV partner, Henan Yuguang.

The company is also the largest silver producer in China. During Noon’s trip to China, the bulk of discussion was centred around:

On October 1, PMY announced that it had completed the entitlement offer, which saw eligible shareholders offered ordinary shares on a 3 for 7 basis with one free attaching option for every two shares subscribed for. The options are exercisable at $0.015 each on or before 21 November 2020 (and have since been quoted on the ASX).

During the quarter, the company received approximately $1 million from shareholders, subscribing for a total of 158,506,899 ordinary shares under the entitlement offer. The shortfall from the entitlement offer was offered to new investors, raising a further $1.6 million,

As of 31 December 2018, the consolidated cash balance was approximately $2.3 million.