Pacifico Minerals (ASX:PMY) has provided an update in relation to exploration at its Berrio Gold Project located in Antioquia, Colombia.

Early stage gold analysis received from auger soil sampling grids have delineated several anomalies over an area of 1.2 kilometres by 1 kilometre. The sampling grids covered areas of the Segovia Batholith and adjoining Berrio sediments, areas that are highly prospective for large gold systems in vein and stockwork systems.

This is a very prospective region with the southern part of the Segovia Gold Belt, having produced several million ounces of gold over the past 150 years, and the eastern side of the Antioquia Batholith, being host to a number of prominent gold deposits.

The potential for the discovery of significant gold deposits in the Berrio district is recognised given the proven large vein and stockwork systems. Important gold deposits in the Antioquia and Segovia Batholith terrain include the Segovia Mine (Gran Colombia, resource of 1.6 million ounces) and Gramalote (AngloGold Ashanti and B2Gold joint venture resource of 3.7 million ounces).

This is, however, early stage for PMY here so investors should seek professional financial advice if considering this stock for their portfolio.

The area covered by the tenements as shown below lies close to the intersection of three major regional faults, the Palestina Fault, Nus Fault and Bagre Fault, and in a district with
significant known gold mineralisation. 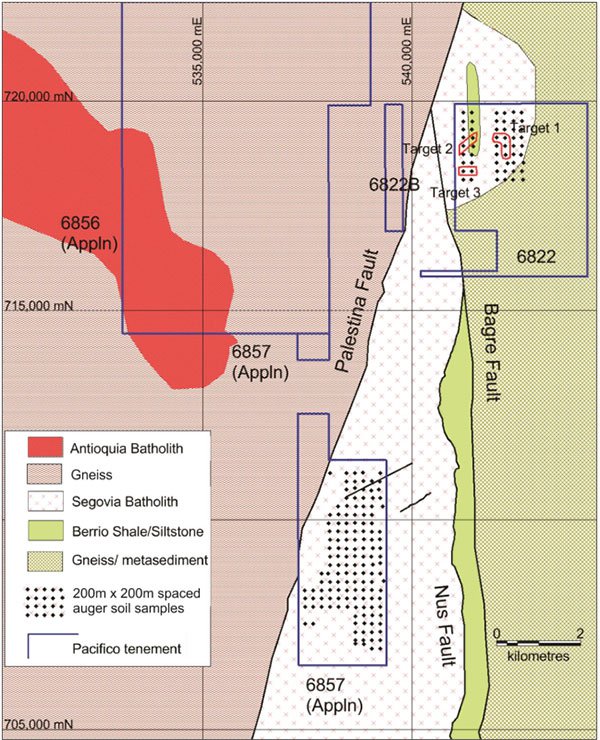 All PMY’s tenements and applications have been covered previously with reconnaissance traverses that included mapping of the geology and taking rock chip samples. Anomalous gold values and widespread hydrothermal alteration of the rocks in structures were noted in the areas selected for the 200 metres by 200 metres soil grids.