This exploration program consisted of 49 reverse circulation (RC) drill holes across a distance of 3265 metres.

A total of 526 one metre intervals have been submitted to the laboratory with results anticipated in January 2020.

Rock chip logging suggests that the new results will support the geological model, with pXRF field data indicating that extensions to the southern portion of B Deposit and south east, west and north of Omega Deposit are likely following the return of lab assays.

To put these developments into perspective, Pacifico had established a mineral resource estimate earlier in the year of 36 million tonnes at 4.7% lead equivalent and 0.5% zinc.

These drilling results will feed into a revised mineral resource estimate in 2020.

The B Deposit and Omega Deposit as illustrated below were a key focus. 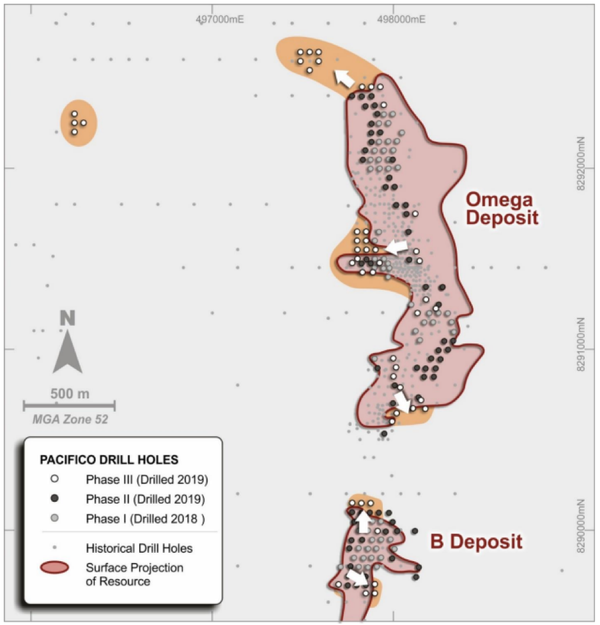 All RC drill holes have now been geologically logged and sampled.

Logging and pXRF testing of rock chips provided a qualitative guide to mineralisation and indicate that significant intersections have been obtained.

A subset of 526 one metre samples were selected from a total of 3,265 metres drilled and dispatched for analysis, and assay results are expected in January 2020.

While laboratory assay data is still required to confirm the drilling results, management discussed some of its observations from rock chip samples that were logged during the process.

Test holes at B Deposit indicated strong and continuous mineralisation at shallow depths of between 30 metres and 55 metres.

The southern extension of the Omega Deposit indicated conformable mineralisation.

Management was more specific with regard to the northern extension of the Omega Deposit, highlighting that there were indications of mineralisation of varying thicknesses and minor zinc associated with the near surface weathering profile.

There were also additional significant intervals of lead at depths ranging between 80 metres and 100 metres.

The westward extension of Omega produced the highest density of drill holes for phase III, yielding significant mineralisation indications at shallow depths of between 10 metres and 20 metres.

The eastward extension and infill showed that mineralisation is open to the east at increasing depths.

Four exploratory holes were drilled to the extreme west, and these intersected mineralisation at shallow depths, suggesting there could be significant mineralisation discovered.

This area has now been prioritised as a key target for diamond drilling in upcoming exploration.

In summing up these developments, managing director Simon Noon said, ‘’Collectively, the field observations are indicative of a successful drilling campaign likely to support further conversion of Indicated and Inferred resources to higher classes of classification and to replace Inferred resources whilst building on the potential of new deposits to be found to the west.’’

Although too early to present any hydrogeological results, management is in no doubt that there will be a step improvement in the predictive understanding of local hydrogeology.