The test work undertaken by an independent laboratory has confirmed that manganese from AXE’s Jamieson Tank project can make electrolytic manganese dioxide (EMD) — a critical component used in the manufacture of cathodes for lithium-ion, alkali and other batteries.

The metallurgical test work involved leaching of the manganese from the old drill sample provided by AXE, and purification to remove iron, cobalt, nickel and other potentially deleterious elements, followed by the ‘precipitation of the electrolytic manganese dioxide onto graphite cathode and titanium anodes’.

In brief, the work showed that the Jamieson Tank manganese was capable of making an EMD product with a manganese content that meets the standard required for alkaline and lithium-ion batteries — which is over 92%.

The Carappee Hill portion was initially drilled by Archer in 2008 with follow up drilling under a joint venture between AXE and the manganese miner and processer OM Holdings Limited (ASX:OMH). The below image was taken when AXE was undertaking drilling at Jamieson Tank in 2008: 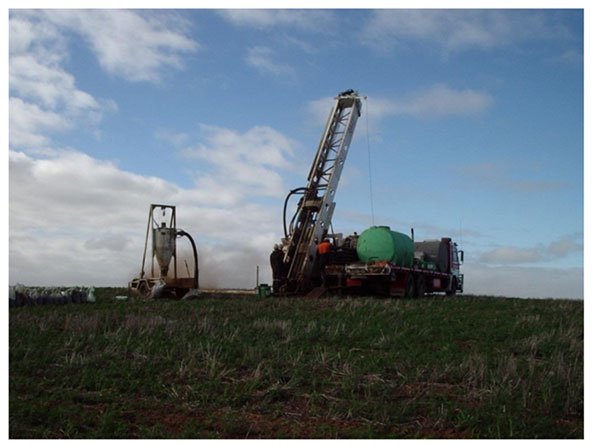 A further 11,000 metres of drilling was completed by Monax and OMH at Jamieson Tank, and AXE is in the process of finalising a maiden manganese Exploration Target.

It should be noted that AXE is an early stage play and anything can happen, so seek professional financial advice if considering this stock for your portfolio.

Executive Chairman, Greg English commented on today’s news, “It is very exciting that our manganese at Jamieson Tank has been independently shown to be suitable in the production of high grade manganese EMD, with its high value applications in emerging and established battery technologies.

“This is consistent with our expanding exploration portfolio focus on advanced materials and reliable energy storage technologies. The Jamieson Tank Manganese Project complements our nearby Campoona graphite and graphene project with its granted mining tenements, and our other manganese and cobalt exploration prospects at Ketchowla and North Broken Hill. We look forward to updating the market on further developments over the coming weeks.”