Shares in Orion Minerals Ltd (ASX:ORN) have surged 50% in the last fortnight, closing at 3.4 cents on Tuesday.

This came on the back of confirmation that a financial team had been appointed to assist in the evaluation of funding options for the group’s Prieska Zinc-Copper Project in the Northern Cape of South Africa.

Endeavour Financial will be working with management to put in place debt financing for the development of the project.

The company’s aim is to have a project development decision in place by the September quarter of 2019 with the timing on bringing the 2.4 million tonnes per annum project into production partly reliant on a bankable feasibility study (BFS) which should be released in the June quarter. 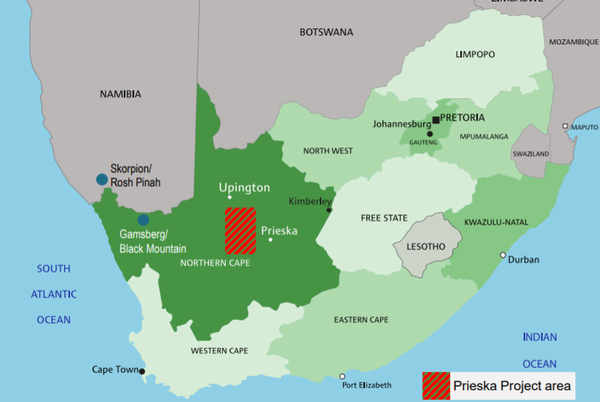 Adding weight to the project’s potential is the presence of Independence Group NL (ASX:IGO) on the share register with a stake of 8.2%.

Independence has a proven record of identifying value in the mining sector, traditionally making astute acquisitions of long life assets.

Orion to benefit from existing infrastructure

As a backdrop, the scoping study announced in December 2018, demonstrated an economically robust project underpinned by a large resource with substantial long-term growth potential.

Features of the study include a 10 year mining scenario with annual production of 2.4 million tonnes of zinc and copper concentrates accounting for about 75,000 tonnes and 22,000 tonnes respectively.

Orion will benefit from some existing infrastructure in place from previous mining projects.

Given the company’s market capitalisation of $64 million, it is punching above its weight with few peers of that size being able to boast such a large project, albeit at a relatively early stage.