Pacifico Minerals Ltd (ASX:PMY) has had a stellar year in 2019, particularly in the second half when the group delivered on some key milestones, most recently updating its Mineral Resource Estimate at the Sorby Hills Lead-Silver-Zinc Project in Western Australia.

The company’s progress was reflected in its share price as it doubled in the six months to June.

The most significant momentum emerged in July with positive metallurgical test work and impressive drilling results triggering a 100% increase in the company’s share price to a 12 month high of 1.2 cents.

Over the last six months, there was also a timely uptick in the prices of the key commodities Pacifico is leveraged to.

However, it is worth taking a closer look at the commodity scene because it could be argued that the recent retracement in Pacifico’s share price may be related to a slight pullback in its key commodities of lead, silver and zinc.

As a backdrop though, these are some of the companies key milestones it has met in 2018/2019, combined with a snapshot of what to expect in 2020.

Don’t forget the impact of a weak Australian dollar

In assessing the commodity price environment it is best to look at a five-year picture, and it is also important to take into account foreign exchange movements.

The sharp decline in the Australian dollar against the US dollar as indicated below (black line) works strongly in Pacifico’s favour.

For example, a lead price of US$2000 per tonne equates to more than $2900 per tonne in Australian dollar terms. 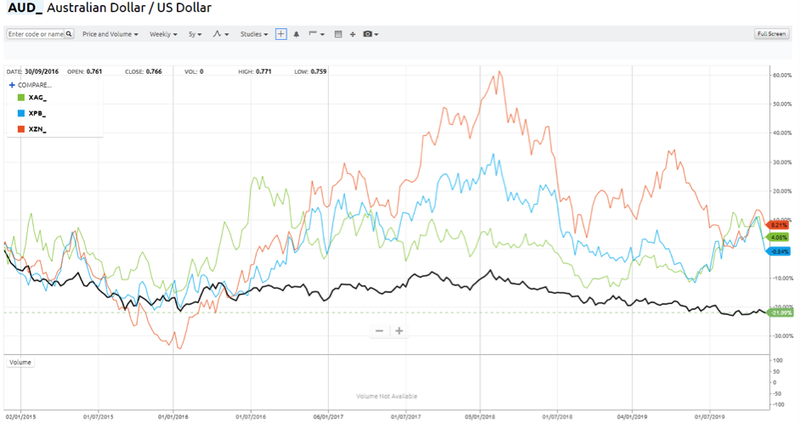 Lead increased from about US$1800 per tonne to US$2200 per tonne at the start of November.

While it has given up some of those gains in recent weeks, the base metal is still trading at the mid-point of its recent rally.

Though the metal’s five-year high is about US$2680 per tonne that was struck in January 2018 when the Australian dollar was fetching US$0.80.

Of course Pacifico also offers exposure to precious metals as silver accounts for a sizable proportion of the mineral resource.

As you can see below, this represented an Australian dollar price of about $28.00 per ounce. 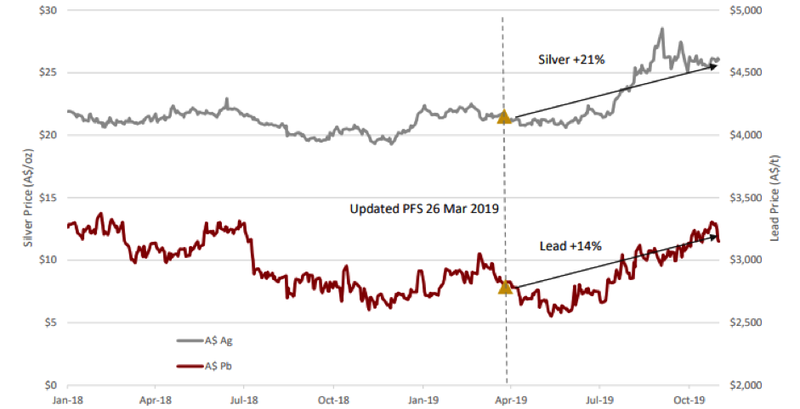 Consequently, in terms of commodity price movements Pacifico is exposed to the right metals at the right time.

Even zinc has rallied after being somewhat of a laggard for the best part of 2019, increasing from about US$2200 per tonne in August to close in on US$2600 per tonne in the first week of November.

Once again, if we want to consider commodity price values on long-term measures, zinc is sitting at the mid-point between its 2016 low of about US$1500 per tonne and the 2018 high of US$3500 per tonne.

This was arguably the highlight of the group’s second half news flow as it resulted in the global resource increasing by 20% to 36 million tonnes at 4.7% lead equivalent which incorporates a 39 g/t silver component.

There was also a 53% increase in the total Indicated Resource, and it now stands at 16.6 million tonnes at 4.8% lead equivalent.

Management believes that the increase in Indicated Resource may support an increase in mining rate to be used in the optimised prefeasibility study expected to be completed in the March quarter of 2020.

The improved geological and analytical data which have supported the updated Sorby Hills MRE has highlighted two additional aspects of the deposit that are likely to have a significant impact on the planned Optimised PFS.

Firstly, the infill drilling and the geological understanding through greater data density has shown that Inferred Resources have a high conversion rate to Indicated Resources through a tightening of the drill hole spacing.

In addition, extension drilling also allows resources to be increased because of the predictable strata-bound nature and geometry of the mineralisation.

Results from the phase III drilling program which is now in full swing should come to hand in late December/early January, and these could well provide share price momentum.

The optimised prefeasibility study and ore reserve estimate which is due in the March quarter of 2020 will be one of the most significant developments for the group in the next 12 months.

It is worth noting that the optimised PFS will build on an already impressive prefeasibility study as outlined below.

Management said that offtake and strategic investment and financing discussions are ongoing, and should the group succeed in negotiating agreements on this front it would definitely be seen as a positive in terms of de-risking the project.

Another catalyst could stem from the drilling of priority targets in the June quarter of 2020.

Pacifico also remains on track to complete a definitive feasibility study in 2020, another important milestone in clearing the way for a final investment decision.