Only scratched the surface at Cortadera says Hot Chili

Initial drilling has focused on the definition of a recently discovered high grade core to Cuerpo 3, the largest of the four porphyry centres discovered to date at Cortadera.

Approximately 250 metres to the south-west of CRP0018D, another diamond drill hole (CRP0020D) has recorded a wide intersection of strongly mineralised porphyry from surface over a down-hole width of 313 metres with the potential for this to extend further.

The final hole is directed towards the definition of an initial high grade core to the main porphyry. 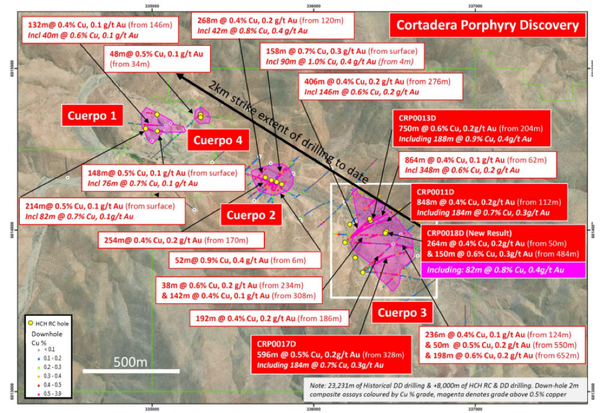 These results, in addition to pending results from CRP0019D, confirm mineralised porphyry extends from shallow depths across a large extent of the main porphyry which had not previously been drill tested.

Cortadera's potential size and significance is only just beginning to be revealed, and management is of the view that further drilling could well position it as one of the most significant Chilean copper porphyry discoveries of the past decade.

Management is eagerly awaiting results from CRP0020D as they could point to a potentially large, up-dip extension to the main porphyry and once again confirm that the largest porphyry at Cortadera remains open and is extending.

Management has accelerated the exploration program, as double shift diamond drilling is scheduled to continue, with expansion drilling set to commence across Cuerpo 2 and 3 in the coming weeks (upon completion of CRP0020D).

Drill testing of the northern and southern extensions to the main porphyry (Cuerrpo 3) will be an initial focus of planned expansion drilling.

Consequently, management expects to be releasing the next set of diamond drill results in the near term, marking the commencement of a strong period of news flow over the coming months.