Halloysite is a rare derivate of kaolin, a clay mineral. It has traditionally used in ceramics and as a petroleum cracking catalyst, however it has a raft of exciting new applications in emerging industries set to only expand in the decades to come – energy storage, batteries, supercapacitors, carbon capture, and cancer therapeutics.

Those new applications have excited the market, especially given halloysite globally is in short supply, and since China recently closed a number of environmentally damaging mines.

Currently pure Halloysite sells for up to US$3,000/t, so a material discovery on this imminent drilling campaign could be a strong share price catalyst for the $66M capped Latin Resources (ASX:LRS).

LRS continues to make strong progress with the Noombenberry Halloysite Kaolin Project and has now received the majority of test work results from the project as it moves closer to establishing a resource estimate.

In September last year, ADN was just 4.5 cents, today it is circa 28 cents after being as high as 43 cents in mid March.

LRS is in a similar position to that of ADN back in September, but with a resource estimate due soon it would be hoping for similar traction.

While recent assay results would suggest MD Chris Gale's confidence in the project is justified at this stage, shareholders would also be interested to know he has other halloysite interests that are also progressing well.

Gale's second halloysite interest is via Oar Resources Limited (ASX: OAR) for which he is executive chairman, and shareholders in that company will be hoping that his experience will assist in successfully developing the Gibraltar Project.

Diversified mining group, OAR has advised that the latest phase of extension air-core drilling has been completed at its Gibraltar Halloysite-Kaolin Project in the Eyre Peninsula, in South Australia.

The project is located to the north and adjacent to the well-credentialled Andromeda Metals Ltd (ASX:ADN) Mt Hope Kaolin-Halloysite Project.

This was completed directly adjacent and to the north of the company’s previous drilling completed in late 2020 which successfully confirmed the presence of high-grade halloysite mineralisation (20%) within a blanket of saprolitic clays.

Logging of drill cutting from holes in the most recent drilling has shown good white kaolinitic saprolite development in the southern portion of the drilling grid, adjacent to and along strike from the previous phase of drilling with the depth to basement/thickness of cover increasing to the north.

The following map shows the substantial landholding held by Oar, as well as illustrating its close proximity to Andromeda’s Mt Hope Project. 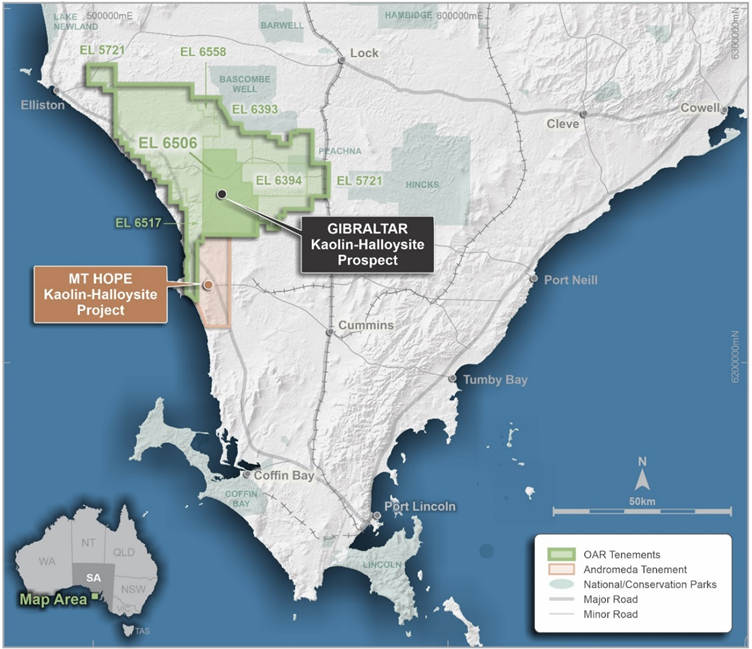 Results expected in May

Based on this logging, selective infill drilling on a 200 metres x 200 metres grid pattern has commenced in this area, to better define this material.

A total of 20 holes for an estimated additional 700 metres will be completed.

Approvals have also been received for a regional reconnaissance drilling program over the wider project area.

The program will aim to identify areas of granite basement favourable for the development of the targeted kaolinite clays.

Composite samples from the early stages of the drilling have been dispatched to the laboratory for detailed test work, with results anticipated to be returned from May 2021.