An initial six-hole drill program totalling 1600 metres at Puncak Selatan will provide important information as to the prospectivity of the broader area.

This has the potential to assist the company in meeting its dual strategy of expanding the two million ounce resource and bringing the project into production.

On this note, managing director, Mike Spreadborough said, “The commencement of near mine exploration is the first step in identifying additional resources that have the potential to be processed at the proposed processing plant and add further value to the long life, low cost Awak Mas Gold Project.”

Nusantara’s share price has increased approximately 50% since December, and it could be argued that further success at Puncak may see this positive momentum sustained.

Improving project value is the key

Recent field exploration has focused on numerous near-mine prospects within a two kilometre radius of the planned processing plant with the aim of enhancing and extending the proposed eleven-year mining operation.

The area being targeted for drilling can be seen to the south-east of the Awak Mas open pit deposit where the company plans to process ore from the current resource. 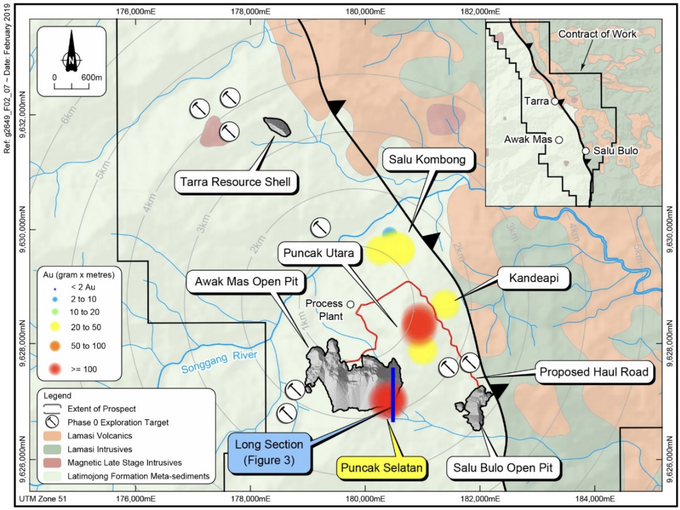 Exploration success during the upcoming drilling campaign would be a significant development for the company as it would provide scale, as well as adding mine life and potentially reducing production costs.

Awak Mas has a rich history

Discovered in 1988, the project has over 135 kilometres of drilling completed in over 1100 holes.

To date, over 1500 metres of near-mine trenching has been completed, and the project has a 1.1 million ounce Ore Reserve and 2.0 million ounce Mineral Resource.

Environmental approval has been received, and the project is close to established roads, ports, airports, and grid power.

In tandem with bringing the project into production, Nusantara intends to expand the resource in order to support a mining operation beyond the initial project life of 11 years.

Multiple drill-ready targets have already been outlined, extending from the three main deposits and in other areas of the 140 square kilometre site.

Near surface mineralisation at Puncak Selatan

The Puncak Selatan prospect was identified as a priority drill target given the significant surface mineralisation and its proximity to the planned Awak Mas open pit.

The drilling program will test the possibility that the Awak Mas eastern mineralisation (Lengket domain) could extend up-dip as the Puncak Selatan prospect surface expression and provide information to assist in confirming the geological model in the near-mine area. 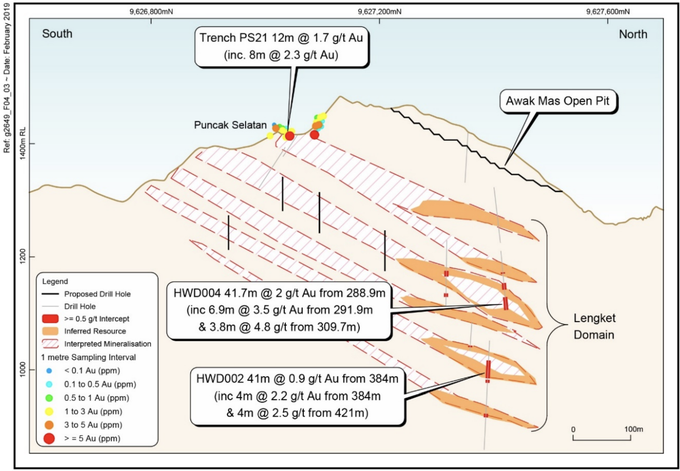