As the Australian dollar gold price continues to make new highs, now pushing up towards the $2100 mark it may be well worth considering emerging producer, Nusantara Resources Ltd (ASX:NUS).

The group has a sizeable resource and development could commence in 2019.

The project has over 135 kilometres of drilling completed in over 1,100 holes.

Environmental approval has already been received for the project, which is favourably located in non-forestry land close to established roads, ports, airports, and grid power.

Nusantara’s second strategy is to grow the resource base and support a mining operation beyond the initial project life of 11 years.

Multiple drill-ready targets have already been outlined, extending from the three main deposits across an area of 140 square kilometres.

A key focus for the September quarter of 2019 is to advance the funding process for the development of the Awak Mas Project.

While this represents a significant milestone for the company, it is worth examining the progress made in the June quarter, and on this note management provided a comprehensive update on Wednesday.

The average gold recoveries showed an improvement in the test-work used as the basis for the DFS, which increased the overall recovery assessment for the project from 91.1% to 93.3%.

The post-DFS Phase 2 program results validated the design parameters selected for the DFS and provides a more robust basis for the prediction of gold recovery.

As highlighted in the DFS, management believes there is potential for the Awak Mas Gold Project to realise a grade uplift when the ore body is mined.

This would have a positive impact on project economics, potentially providing share price momentum.

Nusantara has traded strongly over the last two months with its shares increasing nearly 50% to touch on 20 cents on three occasions since mid-June.

It appears that a break above that resistance point could trigger a further rerating.

Exploration focus is on Salu Bulo

There has been a significant development at the Salu Kombong prospect where further outcrop sampling has been undertaken.

This has been focused on previously reported copper and gold occurrences, confirming the possibility of a porphyry style mineralised system as indicated in the following samples. 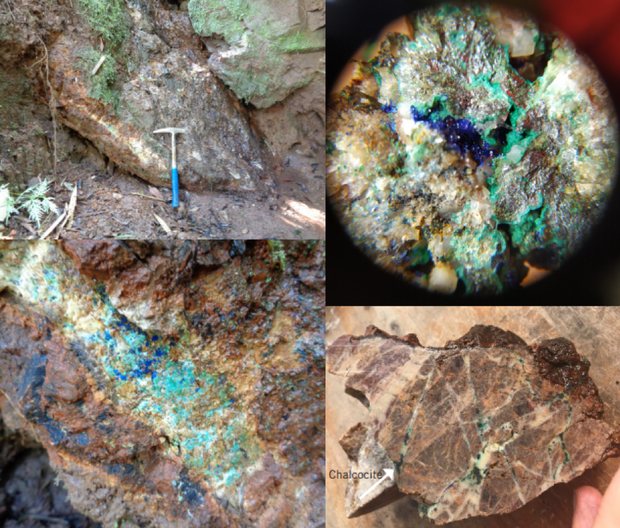 This fits well with the recent geophysics concept of Awak Mas being part of a large scale Intrusive Related Gold System.

Nusantara is currently assessing the significance of this development, and the company will be exposing the mineralisation via mechanical excavation in the September quarter ahead of confirmatory diamond drilling.

Two drill holes were completed during the quarter in the target quarry site identified in the DFS.

The rock characteristics have been confirmed as suitable for road and tailings storage facility development.

An additional four drill holes have been planned for the September quarter to confirm tonnage ahead of project development.

Salu Bulo is within a three kilometre radius of the planned Awak Mas Gold Project.

Mineralisation in the area has demonstrated elevated gold grades compared with other project areas and mineralisation trends extended into large untested areas.

Based on recent structural interpretations recognised from the Puncak Selatan drilling program, this work tested the interpretive signatures as derived from the reprocessed historic aeromagnetic data.

The ground based electrical geophysics program was completed over a three kilometre strike length covering the Salu Bulo deposit and potential strike extension structures to the north and south of the existing deposit.

A combination of exploration results to be released in coming months, as well as a transitioning of Awak Mas into a development project as suitable financing is procured could well see shares in Nusantara hit new highs in the second half of 2019.