Numerous share price catalysts on the horizon for Kingston Resources

There is plenty of positive news emerging from Kingston Resources Limited on multiple fronts (ASX:KSN) as it prepares for exploration and progresses a prefeasibility at two of its projects, and the highly prospective nature of upcoming news has attracted the attention of brokers.

Reg Spencer from Canaccord Genuity is particularly upbeat on the company, recently reaffirming his speculative buy recommendation and price target of 85 cents per share.

This implies share price upside of more than 400% from the company’s current price of 16.5 cents.

On one hand, the quantum of such a rerating may seem a stretch, but on the other, one only has to view the extensive newsflow that is imminent, particularly the PFS and reserve estimation work to understand that these could be the foundation for a significant rerating.

Macroeconomic conditions couldn’t be better for the company with the gold price at near-record highs, and the volatile economic environment suggesting there will be further support for the traditional safe haven precious metal.

Crunching the numbers, Spencer said, ‘’Kingston’s enterprise value to resource multiple of A$9 per ounce is well below the peer group weighted average of $58 per ounce which we consider unwarranted given Misima’s (PNG project) scale and near-term development potential.

‘’A positive outlook for the gold price and relative dearth of advanced gold projects of scale on the ASX further supports our favourable view.’’

Management has just advised that a 5000 metre resource definition reverse circulation (RC) drilling program is set to commence next month at the Kingsley prospect in Western Australia.

The prospect is situated within the company’s 75%-owned Livingstone Gold Project, 140 kilometres north-west of Meekatharra within the Bryah Basin.

The upcoming drilling program has been designed from knowledge gained from the structural review conducted over the wider Livingstone Project, including Kingsley, in late 2019.

The Livingstone Project, including the Kingsley prospect can be seen on the map below.

The aim of the program is to define shallow oxide mineralisation that will contribute towards an initial Maiden JORC Compliant Resource Estimation.

Several holes have also been designed to further test potential depth extensions to the known mineralisation.

The program is fully permitted with mobilisation and drilling anticipated to commence by mid-July and concluding in August.

Final assays are expected from Livingstone by September. 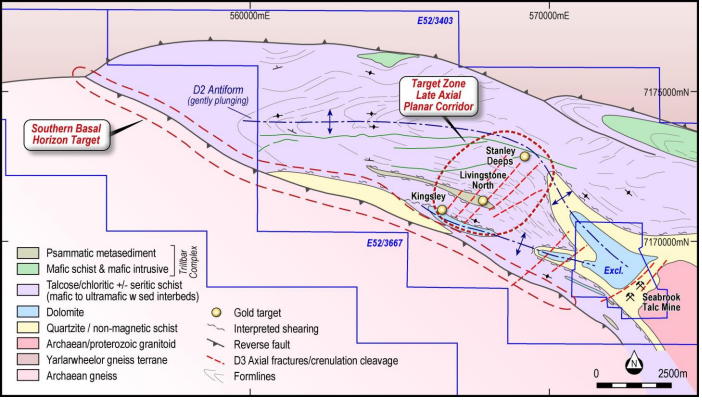 Assays from Livingstone and drilling at Misima in September quarter

Kingston has also been successful in securing co-funding for a further 1000 metres of deep RC drilling at the Stanley Deeps prospect (see above) through R21 of the WA Government Exploration Incentive Scheme.

This drilling will be undertaken following completion of the resource definition program at Kingsley.

As we mentioned, Kingston should benefit from numerous share price catalysts over the next three months with one of the main ones being progress on the PFS for the group’s Misima Gold Project in PNG.

Engineering consultants have been short-listed with an appointment anticipated in early July.

“With this next round of drilling at Kingsley we are aiming to define a shallow oxide resource, as a base from which we can grow the project.