NSL Consolidated (ASX:NSL) has managed to negotiate a 25% saving on its phase two beneficiation plant in India, with the payment timeline also pushed out to avoid a capital crunch.

It told the market today that as the result of negotiations with Chinese fabricators that it had managed to bag its phase two plant for just over $US1.05 million ($A1.38 million), a 25% saving on previous estimates.

It also managed to push the payment timeline out to February next year, with a staged payment plan within that timeframe outlined.

Previously, NSL was on the hook for 100% of the payment before the beneficiation plant was shipped out to India.

NSL had previously flagged talks between the company and Chinese fabricators on a cost-reduction, taking advantage of a well-publicised downturn in manufacturing capacity in Chinese fabrication yards.

At the end of the talks, Huate Magnetism was selected as the fabricator of choice – with NSL hinting that the play from Huate was more strategic than a simple fabrication contract.

“This agreement with Huate further supports the confidence in the company’s Indian iron ore projects and the larger scale Indian iron ore industry, an industry in [which] Huate desires to gain a position,” NSL said in a statement.

The plant will be shipped off to India in three stages, with on-site civil work to start immediately.

Onsite construction of the plant is slated for May, with NSL telling shareholders the plant would be cashflow positive in the fourth quarter.

What NSL Consolidated is doing

The second phase plant is one of two plants NSL is using to beneficiate lower-grade iron ore, bringing it up to a saleable grade.

The plant will be able to take low grade iron ore and improve it to achieve grades between 58% and 62%, with a production capacity of 200,000 tonnes per year. 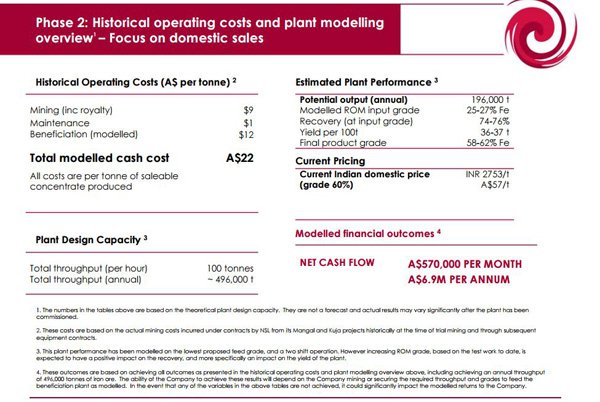 The construction of the wet plant is being underpinned by offtake agreements penned with industrial giants JSW Steel and BMM Ispat.

NSL has been hard at work tying up various offtake deals for its phase one, phase two, and specialised ‘lump’ product in recent times, but several of these deals are non-exclusive meaning NSL has scope to pursue a better deal should one come up.

The plant will be placed at its operation in the Indian state of Andhra Pradesh, which NSL continues to work with.