Holland has a strong track record of value creation, not just in terms of growing production, but also in optimising operational efficiencies.

Most notably, Holland’s long-standing leadership and business acumen as Vice President, Australian operations of Kirkland Lake Gold Ltd. (ASX:KLA | TSX:KL | NYSE:KL) was instrumental in transitioning the Fosterville Gold Mine in Victoria from gold production of approximately 100,000 ounces per annum in 2010 to a world-class low-cost/high production mine producing 620,000 ounces in 2019.

Holland has also demonstrated his astute understanding in terms of framing exploration strategies, with discoveries of the high-grade Eagle and Swan orebodies being significant developments at Fosterville.

His experience should prove invaluable for Navarre as the company progresses an active exploration program across a number of sites in highly prospective regions which would be well understood by Holland who noted today that the region is being rediscovered by a new generation of explorers, miners and investors, making it an exciting place and time for him to be involved in what is an unfolding story of rediscovery.

It is also worth noting that Holland was previously general manager of the Fosterville Gold Mine and a former State councillor with the Minerals Council of Australia, Victorian Division.

With Navarre’s projects at varying stages of exploration and adjacent to different geological trends, it is worth conducting an overview to appreciate the company’s prospects as new exploration initiatives are about to be undertaken.

Some projects have experienced delays due to COVID-19 regulatory requirements, indicating that news flow is likely to accelerate shortly after a lull over the last month.

South plunging gold shoots to be targeted at Resolution Lode

The most recent exploration news was on April 27 when Navarre released results from the first eight holes of an ongoing diamond drilling program that is testing for depth extensions of shallow gold mineralisation discovered at Resolution Lode.

As indicated below, this is located on the eastern flank of the Irvine basalt dome, part of the 100%-owned Stawell Corridor Gold Project in western Victoria. 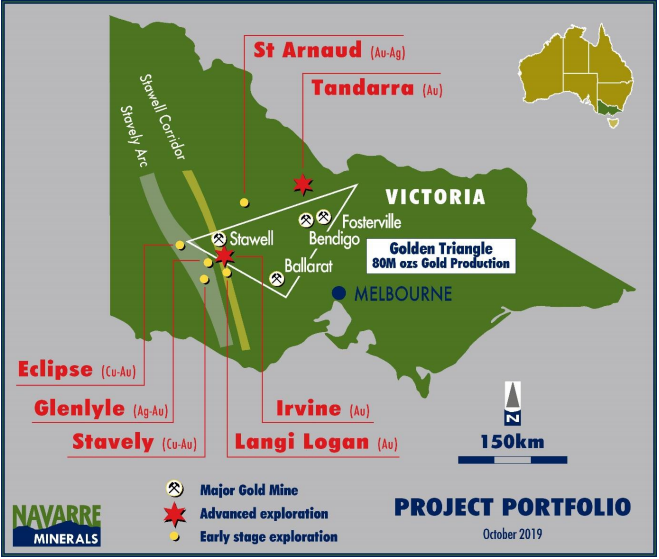 The Irvine basalt dome occurs within a prospective corridor of rocks that host the 5 million ounce Stawell and 1 million ounce Ararat goldfields located along the western edge of the Stawell Geological Zone.

Gold mineralisation at Resolution Lode has been expanded beyond a depth of 300 metres and remains open down-plunge to the south.

The ongoing diamond drilling program has been adjusted to target the projected positions of the shallow south plunging gold shoots at depth.

The drill results from Resolution Lode are providing strong evidence for gold-shoot development, similar to that mined on the flanks of the Magdala basalt dome at Stawell’s 4 million-ounce Magdala Gold Mine, on-strike 20 kilometres further north.

Looking across the company’s other prospects, Langi Logan is at an early stage of exploration and is showing potential to be a new gold system similar to the Magdala gold deposit at Stawell.

During the March quarter, the company completed an airborne VTEM geophysical survey to assist with the search for potential gold and massive sulphide mineralisation on the flanks of the Langi Logan basalt dome, and interpretation of the data is in progress.

The volcanics are mostly concealed by younger cover rocks, and Navarre is targeting large VMS, porphyry copper-gold and epithermal deposits.

During the March quarter, Navarre completed its third phase of AC drilling designed to expand and scope the shallow lateral expanses of the gold and silver mineralisation discovered in 2018.

The drilling intersected similar discrete gold-zinc-copper mineralisation, mainly within a broad envelope of anomalous silver assaying between 1 and 12 g/t silver, as seen in the earlier phases of shallow AC drilling.

The Tandarra Gold Project is a joint venture with manager, Catalyst Metals Limited (ASX: CYL), with the latter owning 51% of the project.

It is an advanced exploration project with strong potential to reveal a large-scale gold system obscured by shallow cover.

During the quarter, a reconnaissance AC drilling program was completed across the southern projection of the Tomorrow and Macnaughtan gold zones.

In addition, a new zone of gold mineralisation, named the Lawry Zone, was revealed approximately 400 metres to the east of the Tomorrow Zone.

This new mineralised trend has been intersected in two adjacent drill traverses spaced 200 metres apart and it is highlighted by a wide zone of quartz-hosted gold mineralisation in air-core hole ACT378 which terminated, at refusal, in quartz grading 10.2 g/t gold.

The zone remains open to north, south and at depth.