Not surprisingly, when Nickel Mines Ltd (ASX:NIC) informed the market of its decision to increase the company’s 17% ownership in the highly successful Ranger Nickel Project to 60% the company’s share price increased sharply.

The uptick from 41.5 cents to a high of 46.5 cents in the week following the announcement represented an increase of approximately 12%.

However, there has been recent weakness in the nickel price, and perhaps that accounts for a retracement towards the end of April.

This could represent a buying opportunity, particularly if analysts at Macquarie are on the mark in projecting sustained upward momentum in the nickel price in coming years.

The broker’s forward estimates are highlighted below, and they are generally in accord with Bell Potter’s forecasts, one of the brokers that covers NIC. 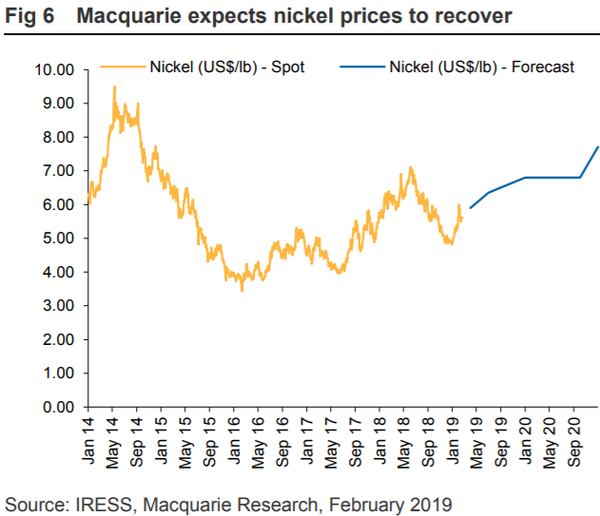 The broker is bullish on NIC, taking a particularly positive stance since the group announced that it would be increasing its stake in the project to 60%.

How does this snapshot of NIC’s financials look?

In response to increasing its holding to 60%, Bell Potter substantially increased its profit forecasts for fiscal years 2020 and 2021, reflecting the significantly higher proportion of revenues attributable to NIC as a result of increasing its stake in the project.

The broker’s net profit estimates for fiscal years 2020 and 2021 were increased from US$95 million to US$136 million and US$110 million to US$157 million respectively.

This implies earnings per share of 12 cents in fiscal 2020, indicating that the company is currently trading on a forward PE multiple of less than four.

This represents a significant discount for a company that has material earnings visibility, strong financial partners and an operation (60% owned Hengjaya Nickel Project) that is running at nameplate capacity, no small feat in itself given that it was only commissioned three months ago.

In commenting on the game changing medium to long-term significance of the group’s move to 60% ownership, as well as the negotiation of an agreement regarding an acquisition financing package, managing director, Justin Werner said, “We are extremely pleased to be in a position to fast-track our increased interest in the Ranger Nickel Project with Ranger now set to commence commissioning well ahead of schedule.

“This decision will see our attributable nickel production across both Hengjaya and Ranger nearing 20,000 tonnes per annum and see us well on our way to fulfilling our ambition of being a globally significant nickel producer and a tier-1 nickel investment exposure among our global peer group.”

This is definitely the case as NIC is a much safer way to gain leverage to the nickel price than targeting speculative miners.

While a PE-based positive rerating should occur sooner rather than later, also keep an eye on the nickel price because even a 5% increase will have an exponential impact on NIC’s bottom line.