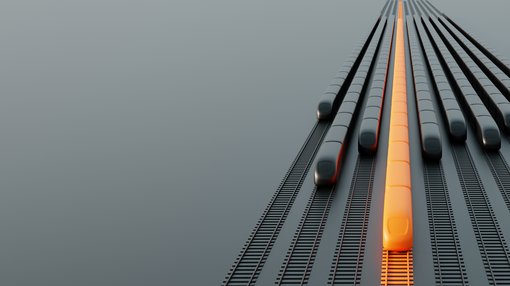 Nickel Mines Ltd (ASX:NIC) has advised that the company’s 17% owned Ranger Nickel Project has produced its first nickel pig iron (NPI), a development that could see the company’s shares push up towards higher levels, particularly given broker valuations are in the order of 90 cents per share.

On May 30, 2019, Shanghai Decent, the company’s operating partner and 83% equity holder in the project advised that first NPI had been produced from one of Ranger Nickel’s two rotary kilns in a maiden production run.

The commissioning process and ramp-up to full production will be consistent with that implemented at the company’s 60% owned Hengjaya Nickel Project and across the 20 other RKEF lines currently in operation within the Indonesia Morowali Industrial Park (IMIP).

Nickel Mines managing director Justin Werner highlighted that this milestone had been achieved well ahead of schedule saying, “Nickel Mines is extremely pleased to be able to report the significant milestone of maiden NPI production from the first Ranger Nickel kiln.

“Once again we thank our partner Shanghai Decent for their commitment to delivering this project well ahead of schedule and for supporting the company in its endeavours to rapidly move to increase our equity interest in the Project.

“With a 60% interest in both the Hengjaya Nickel and Ranger Nickel Projects, Nickel Mines will have achieved a production profile of approximately 20,000 tonnes of nickel metal per annum in just over 15 months, with further optionality to increase our interest in both projects to at least 80% over the next 12 months.

Ranger Nickel’s second kiln is anticipated to commence commissioning by early July, with both kilns expected to take approximately two months to ramp up to 80% of capacity.

The commissioning of Ranger Nickel comes well ahead of previous guidance for midway through the September quarter and underpins the company’s decision to fast-track its acquisition of a further 43% interest in the project as announced in April.

Nickel Mines will now enjoy earlier than anticipated cashflow from Ranger Nickel, and by exercising its contractual option within 60 days of first NPI production the company will also benefit from acquiring its additional interest at a discounted valuation of US$280 million.

These developments should also position the company well to deliver on broker forecasts which point to a substantial profit in fiscal 2020.

Bell Potter analyst, David Coates is forecasting sales of US$516 million in fiscal 2020 which he expects will underpin an attributable net profit of US$139 million, representing earnings per share of 12.5 cents in Australian dollars.

This places the company on a steeply discounted forward PE multiple of 3.4 based on its current share price.

Nickel Mines is Coates’ ‘top pick’ in the sector, and his valuation of 93 cents per share, implying a PE multiple of 7.4 appears to better reflect fair value than that represented by its recent trading range.

Both kilns ramp up production

Further to the strong maiden quarter of production at Hengjaya Nickel, both kilns have continued to ramp up production over April and May.

While cost data for May is not yet available, the price received in April was US$12,800 per tonne of nickel sold and in May it was US$11,800 per tonne, which as indicated below implies healthy margins above the all in cost. 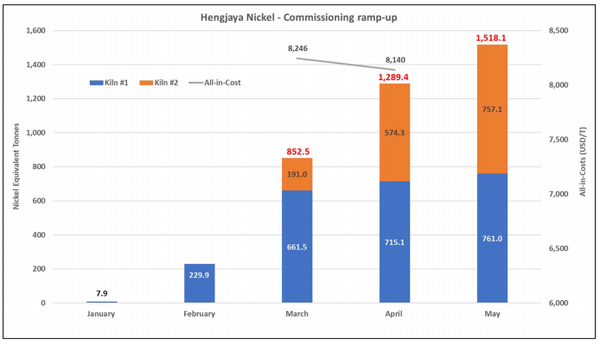 On that note, Werner said, “With Ranger Nickel set to replicate the strong production performance of Hengjaya Nickel, we are confident we are on track to establish a world class nickel company that can lay claim to the lowest capital intensive, and among the most profitable nickel units in the global market, establishing Nickel Mines as a preferred nickel exposure amongst its global peer group.”