The Mzarabani Prospect has grown significantly in its scale and represents one of the largest conventional exploration targets globally.

The Independent Report by Getech has estimated the net mean recoverable conventional potential of the massive stacked Mzarabani prospect of 1.3 billion boe (barrels of oil equivalent) consisting of 6.5 Tcf (trillion cubic feet) and 200 million barrels of condensate net to Invictus.

The estimate for the primary Upper Angwa target within the Mzarabani Prospect has increased to 4.4 Tcf + 187 million barrels of conventional gas-condensate on a gross mean unrisked basis.

In addition, the newly identified Msasa Prospect, a new substantial structural prospect within SG 4571 which is also a stacked anticline feature, is estimated to contain 1.05 Tcf and 44 million barrels of conventional gas-condensate on a total gross mean unrisked basis.

The following provides a snapshot of Invictus’ gross unrisked estimated prospective gas and condensate resources, underlining the options open to it in terms of tapping into a variety of high profile exploration targets. 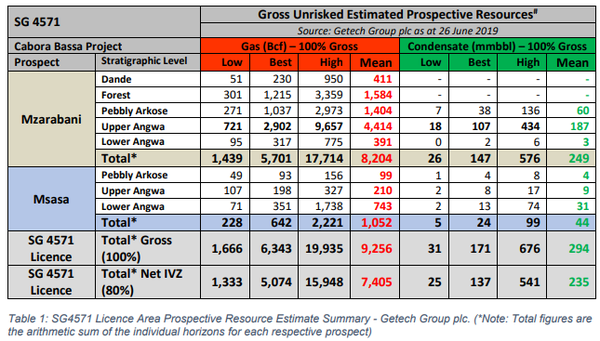 The updated estimate is the culmination of technical work over the last 12 months.

The substantial work undertaken to integrate the geological and basin modelling studies with the reprocessed and interpreted gravity, magnetic and seismic datasets has enabled Invictus to characterise the subsurface in more detail and identify and quantify the additional prospectivity. 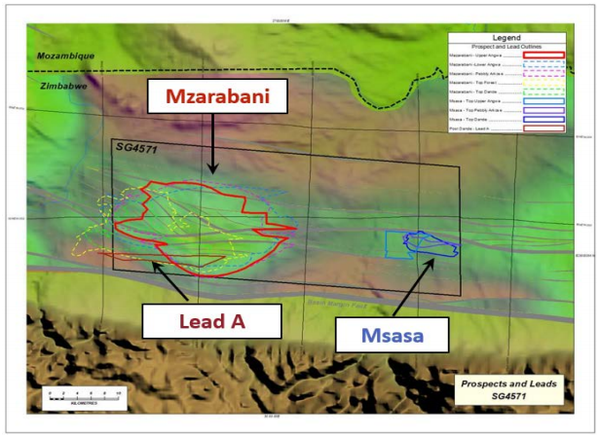 This development has not only materially enhanced the value of the company’s acreage, but it has also de-risked it, an important aspect in terms of negotiating farmout agreements, attracting joint venture partners and raising capital.

Invictus’ understanding of the petroleum system in the Cabora Bassa Basin has been significantly enhanced as it has worked through new and improved data in recent months.

Invictus has engaged UK based ENVOI, a leading Acquisition and Divestiture adviser for the international upstream oil and gas industry, to run the farmout process for SG 4571.

The company has received significant industry interest ahead of the data room opening and is currently executing confidentiality agreements with several parties.

On the permitting front, Invictus has engaged the Scientific and Industrial Research and Development Centre (SIRDC) to conduct an Environmental Impact Assessment (EIA) of SG 4571.

The commencement of the EIA aims to ensure all necessary pre-drilling permits and activities are completed well ahead of schedule.

SIRDC has experience in carrying out EIAs of developmental projects in fields such as agriculture, mining, energy generation and construction projects.