The previously named Metminco Limited (ASX:MNC) has launched the company’s new branding which will see it trade as Los Cerros Limited (ASX:LCL).

Los Cerros, or “The Mountains” in Spanish was chosen as the company’s new name marking the reinvigoration of the group following a series of corporate transactions completed in 2019.

It is also considered by the directors to better reflect and acknowledge the focus on the Andes Mountains of Colombia.

With the change of name, the company’s shares will also trade under the new ASX code LCL, effective today. The former Metminco’s traded options will have the new ASX codes LCLOA and LCLOB.

Los Cerros has recently completed a drilling program at its Chuscal prospect and the group has identified a number of follow up targets for the 2020 drill program across the broader Quinchia Gold Project, of which Chuscal is a part.

Commenting on these developments, Los Cerros managing director, Jason Stirbinskis said, “The maiden drilling program at Chuscal has been illuminating.

‘’The company has already used the drill data to vector in on two porphyry targets at Chuscal.

‘’Management is using the new information to formulate its 2020 work plan, not just for Chuscal, but also at other important projects within the three kilometre radius that make up the Quinchia Gold Project.’’

When Los Cerros received the final tranche of assays for the 2019 Chuscal drilling program which consisted of four diamond holes management viewed the results as ‘significant and pleasing’.

In the context of a maiden drilling program targeting a large porphyry/epithermal system, this particularly referred to the increased understanding that the company now has of the geological features that are at play in the Chuscal prospect, and possibly what can be expected in the broader area.

Chuscal is a gold porphyry and vein target within the Quinchia Project which also hosts the Tesorito Prospect and the established Ore Reserve at Miraflores, all within a two kilometre radius as indicated below. 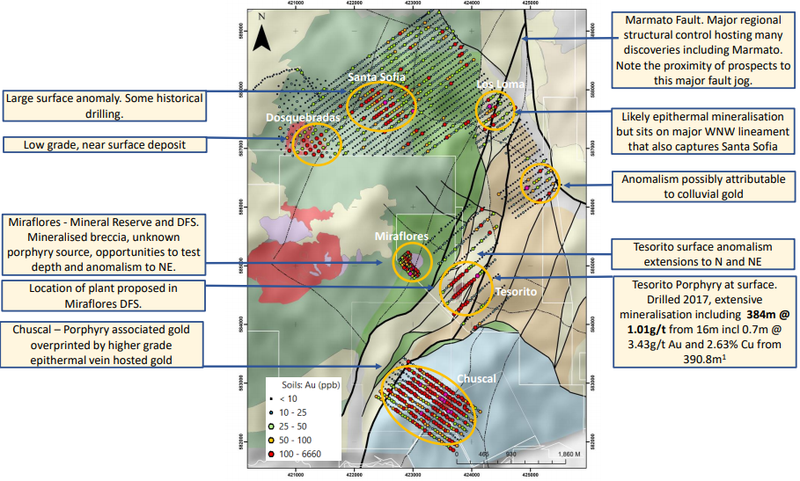 There are several theories associated with the underlying geological events that have impacted what management believes is a ‘big and complex system’.

On this note, managing director Jason Stirbinskis said, “We are interested in better understanding the controls to high grade gold mined by artisanal and CBM (carbonates and base metals) veining which is the primary vein style carrying high grade gold at Continental Gold’s Buritica project located to our north and at other projects within the Mid-Cauca belt.

‘’Developing an understanding of stages associated with gold mineralisation and development of a 3D geological model of Chuscal will contribute to better future targeting.

‘’It is also our understanding that geochemical profiling, of which the above is an example, has not been applied to Miraflores or Tesorito by previous explorers and developing a better understanding of gold distribution within these deposits will be part of the early 2020 program”.

It is worth noting that Metminco’s Miraflores deposit which lies to the north and is situated in close proximity to established large gold mines has a gold resource of 877,000 ounces (9.3 million tonnes at 2.8 g/t gold), including a reserve of 407,000 ounces gold.

The high profile mines located in relatively close proximity can be seen below. 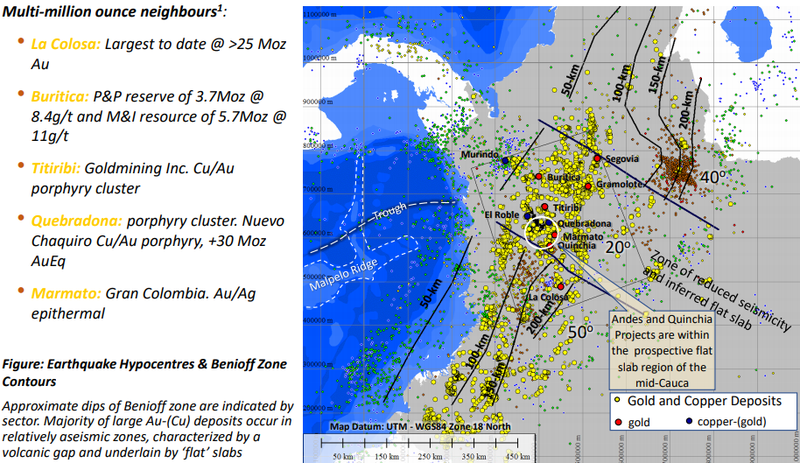 Spoilt for choice with broad range of projects

Management has numerous options as it plans the company’s 2020 exploration program.

Los Cerros’ robust pipeline of projects is outlined below. 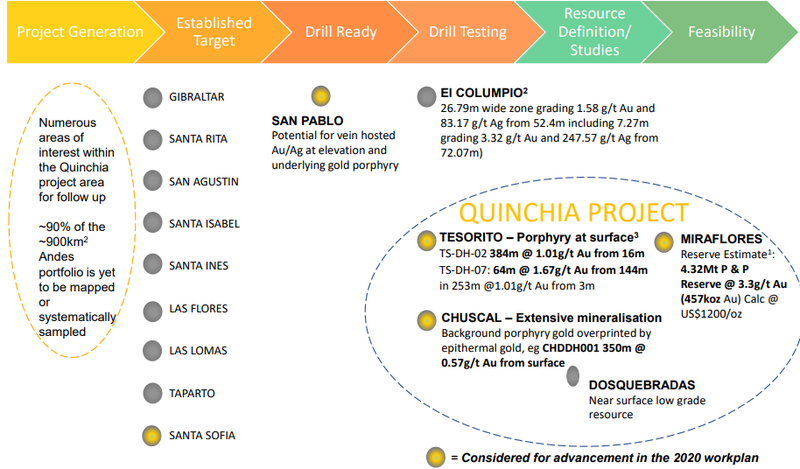 The Tesorito prospect is an interesting one as it has mineralised porphyry within approximately 500 metres of the proposed plant location.

Only 300 metres of the two kilometre strike has been drill tested to date. 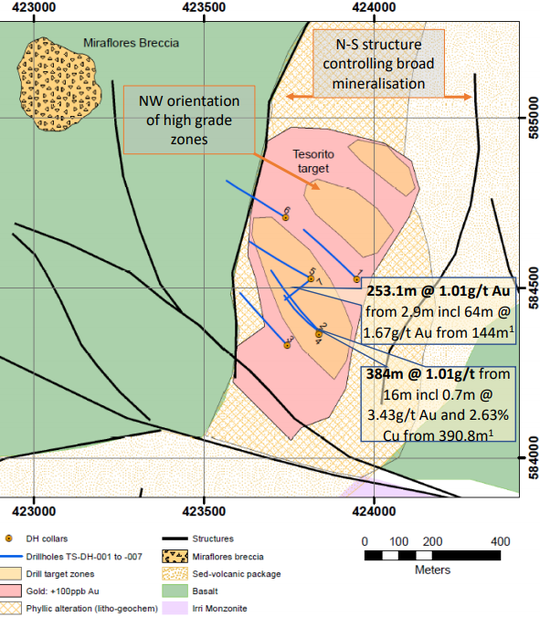 Management intends to conduct ground magnetics and infill and extension of its surface sampling program.

Historical drill assay data will also be revisited, along with samples of the physical core with a view to undertaking detailed geochemical profiling, once again enhancing the company’s understanding of the geology, in particular the distribution of grades.