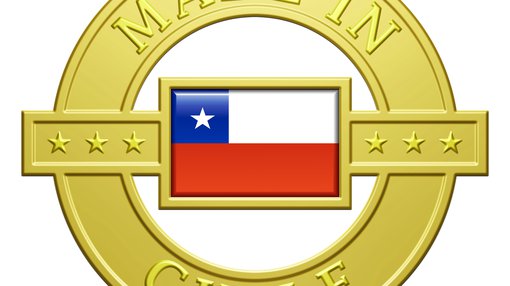 Plukka Limited (ASX:PKA) is an Australian public company which has been listed on the Official List of the ASX since 28 January 2004.

However, it is about to undergo a transformational change in terms of principal activities with gold mining in Chile being the new focus.

In January 2018, the company announced its plan to close its fine jewellery business with a view to acquiring a new asset or business to help maximise shareholder value.

On 5 August, 2019, Plukka entered into a binding Term Sheet, pursuant to which the company agreed to acquire 100% of the issued capital of Tesoro Resources Ltd.

On 3 October, 2019, Plukka, Tesoro and the Tesoro Shareholders entered into an Acquisition Agreement in relation to the proposed acquisition, superseding the Term Sheet.

Plukka’s transition to Tesoro and the changes in its principal activities were ratified last Thursday.

The company also received approval to undertake a capital raising and issue shares to Tesoro’s shareholders as consideration for the transaction.

Plukka will now be renamed Tesoro Resources Ltd, and in discussing the company’s operations throughout the rest of this article we will refer to the company as such.

Tesoro aims to raise between $4.5 million and $5.5 million through a capital raising which closes at the end of November with securities issued shortly thereafter, at which point the acquisition will be formalised.

Anticipated commencement of trading is 5 December, 2019.

From a financial perspective, this is how Tesoro will shape up depending on the amount of capital raised, which in turn will impact the proposed allocation of funds as can be seen below. 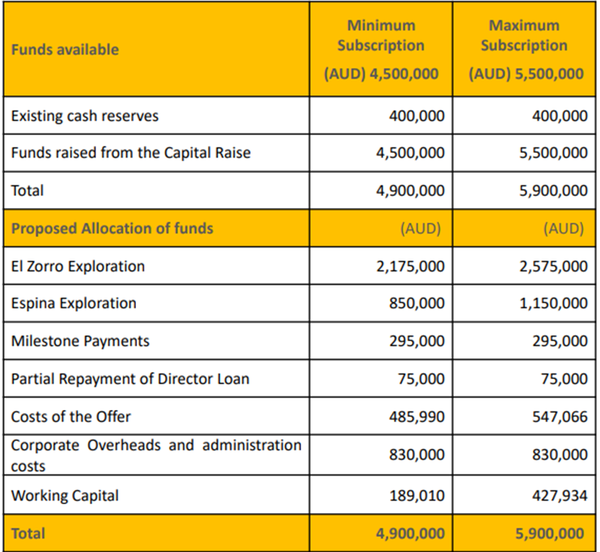 Pursuant to the Acquisition Agreement, the company will acquire 100% of the Tesoro shares providing the opportunity to explore and potentially develop and mine the El Zorro and Espina projects in Chile, with the former emerging as a major newly discovered gold system.

The EV for Espina on day one is approximately $5.8 million.

Full details of these large scale mineralised projects, acquisition agreements and capital structure is contained within the prospectus available at Tesoro’s website: www.tesororesources.com.au.

Tesoro Chile has the right to acquire up to 80% of the El Zorro Gold Project, 130 kilometres from Copiapo in Region III (Atacama) of Chile, approximately 850 kilometres north of the Chilean capital, Santiago. The project is located only 10km from the coast at low altitude and has easy access to infrastructure and mining support services.

It is fully permitted with drilling set to start on day one.

Tesoro Chile currently owns 51% of El Zorro and is required to pay approximately US$100,000 in project payments by January 2022 as reimbursement for historical costs incurred by Sr Bahamondes and his related companies in development of El Zorro and US$3.5 million in expenditure on the El Zorro project prior to January 2021 in order to earn 80%. Tesoro has already spent approximately US$1.5 million on exploration of the project.

The project covers an area of approximately 10,500 hectares.

From a geological perspective, gold mineralisation at El Zorro is associated with a suite of felsic to intermediate intrusive rocks (diorites and tonalites) which have been subject to multiple phases of faulting and brittle deformation resulting in the deposition of gold bearing fluids within intrusive rocks.

Tesoro has undertaken considerable exploration work at the project including the drilling of 16 diamond drill holes which have returned a number of wide, high grade gold intercepts.

At Coquetas a mineralised zone of more than 650 metres has been defined, with gold mineralisation identified up to 100 metres thick and 300 metres deep, as well as being open in all directions.

As indicated below, all holes encountered gold mineralisation with some of the high-grade returns outlined on the right-hand side.

Adding further flavour to the story has been the identification of multiple anomalies at new prospects including Buzzard which featured 26 metres at 1.6 g/t gold including 8 metres at 3.1 g/t gold at surface in outcropping mineralised rock

A 10,000 metre drilling program which will target extensions of known high-grade mineralisation at Coquetas, plus infill drilling is planned for 2019/2020. The company is aiming to define a resource during 2020 from Coquetas.

It will also test new drill new targets at Toro Blanco, Drone Hill and Buzzard if warranted from follow up sampling work.

Importantly, El Zorro is drill ready and investors should start to see assay results from Coquetas drilling in early February. The Company is well prepared and drilling will commence immediately upon readmission o the ASX list.

Further, there could be some news in the interim with 1000 outcrop channel samples ready to be assayed with results expected in January.

The end game is to establish a well-defined geological model and a mineral resource estimate which would provide the foundation for an accelerated earn-in process and move the project into development.

Potential to move to full ownership of Espina Gold Project

Tesoro Chile has the right to acquire up to 100% of the Espina Gold Project, 50 kilometres south of Santiago, in the Maipo Valley, Chile.

The Espina project covers an area of approximately 5,530 hectares and as indicated below, it is within a well-known epithermal gold region, 25 kilometres north of Yamana Gold’s operating Florida mine.

Tesoro is targeting epithermal style gold mineralisation which has been identified within the project area along two main structural trends, mapped for over 2km long each.

Considerable exploration work has been undertaken at the project including mapping, systematic soil sampling (over 1,000 soil samples), processing and interpretation of aeromagnetic data.

Tesoro’s work has returned rock chip results from outcropping epithermal veins of up to 69.3 g/t gold.

The Infiernillo Trend and the Puertelera Trend have been identified, and these have a strike extent in excess of 2 kilometres each and are coincident with soil anomalies featuring gold, silver and base metals such as zinc and lead.

The following map shows where the Infiernillo and Puertelera trends are located.

While Espina isn’t drill-ready, results from assays of 140 outcrop epithermal vein samples and 420 soil samples should be received in January. The Company is planning a maiden drill program at Espina during 2020.