Just weeks ago, WRM announced that it had expanded its strategic landholding at Red Mountain in consultation with its strategic partner, Sandfire Resources (ASX:SFR), staking an additional 524 mining claims to bring the total to 754 and more than tripling its landholding.

Strong precious metal and other pathfinder elements were detected, with WRM identifying strong base metal anomalism of up to 1.1% zinc in streams, which indicates high prospectivity for outcropping massive sulphides.

This part of the comprehensive 2018 exploration program was optimised based on the geochem orientation survey completed across known mineralisation at Dry Creek. This 'calibration' provided a geochemical signature of base metal and precious metal elements together with other pathfinders to use for future exploration of the VMS prospective stratigraphy on both the northern and southern limbs of the regional Bonnifield syncline.

The 2018 reconnaissance program identified a number of extensive alteration features for future exploration. Some of these extend on surface for several kilometres of strike.

The results from the regional stream sampling program have successfully highlighted eight priority anomalies within the area of alteration, providing areas for immediate focus through follow-up ground reconnaissance, surface sampling and the application of electrical geophysics prior to drill targeting. 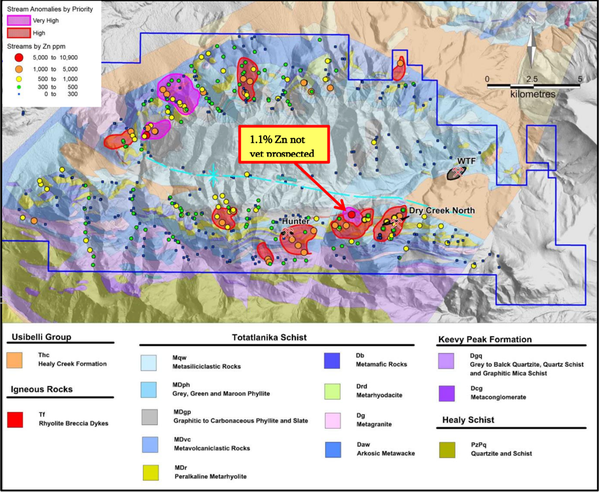 The significance of some of the geochemical anomalies is illustrated by the tenor of anomalism with one stream sample returning 1.1% zinc in an area towards the top of the VMS prospective stratigraphy to the west of the Dry Creek deposit.

Additionally, the area of the northern limb known as Glacier Creek displays footwall sulphide alteration that extends for over 10 kilometres of strike. The stream sediment survey has identified four discrete high priority targets within the area of alteration.

Follow-up work will now be able to focus on these discrete areas of anomalism to rapidly advance to drill testing in 2019.

“The culmination of this work encouraged White Rock to expand its strategic tenement holding to take in more of what has been identified as a highly prospective geological setting.

“In addition to this successful drilling campaign, including a new discovery of high-grade zinc-rich VMS mineralisation at the Hunter prospect, we now have the results from our regional stream sediment sampling campaign. These results reinforce our belief that the Red Mountain project could yield a camp of VMS deposits in the year ahead.

“Together with the expansion of the tenement package to 475km2 and coverage of multiple new VMS occurrences throughout the Bonnifield district, White Rock is now poised to advance the project rapidly in 2019 through a second year of aggressive prospecting and drilling.” 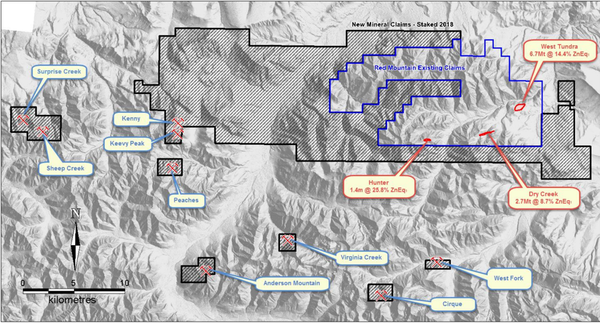