A new direction leads to resurrection at TSC

While the broader period 2018 to 2019 has been a transitional year for Twenty Seven Company Limited (ASX:TSC), in terms of concrete news flow and related share price appreciation it has mainly been in the last four months that the company has come under the microscope.

The positive momentum started in early July when the new management team said that it was going to focus on historic economic gold intercepts found within a 12 kilometre prospective strike zone at the Rover project, 140 kilometres from Leonora in the West Australian goldfields.

Within a month, it was evident that this strategy was paying off, and during that period the company’s shares increased three-fold.

Management has since been able to provide more detailed exploration results regarding the Rover project, providing sustained share price strength.

However, before delving into the Rover Project it is important to gain an appreciation of what has changed at the roots of the company as this will provide an insight into how it is placed to take advantage of newfound opportunities.

Board restructure and revised commodity focus

In April 2019, TSC underwent a board restructure with the most significant development being the appointment of Robert Scott as a non-executive director.

Scott has extensive experience as an executive in the mining industry having been on Sandfire Resources’ (ASX:SFR) Board since 2010 and overseen the development and commercialisation of the world-class, high-grade Degrussa Copper-Gold Mine in Western Australia as well as overseeing its ongoing exploration activities.

Scott also brought board experience in the mining and energy sectors through his involvement with other companies including RTG Mining Inc which has advanced copper and gold exploration interests in the Philippines and Bougainville.

Scott has a strong global corporate background having been an international partner with Arthur Anderson, and he is also a fellow of the Institute of Chartered Accountants.

Today, it is Robert Scott as chairman and Ian Warland as chief executive that are shaping the company’s future.

The new board’s initial focus was a review of the macro environment and reconciling how best to optimise the current asset mix to generate maximum value for shareholders.

With cobalt having been on a cyclical downturn for the past 12 months, the board determined it prudent to broaden the group’s strategic scope to encompass base and precious metals, whilst actively re-aligning the asset mix.

Revised focus on precious and base metals

Notably, the re-rating in the gold price over the prior 12 months to more than US$1500 per ounce (+ $2200 per ounce in Australian dollar terms) materially enhanced the prospectivity of the group’s established Rover Project in Western Australia’s goldfields.

It was on this basis that management decided to strongly focus on the 12 kilometre prospective gold strike along the eastern boundary of Rover that the geology team had been investigating.

Preliminary evidence from rock-chip and soil assay results had highlighted the potential for volcanic massive sulphide (VMS) mineralisation at the Creasy II prospect.

Creasy 1 has several shallow economic drill intercepts with up to 1.94 g/t gold, making it one of the priorities for upcoming drilling.

The study area is highlighted on the following map which also shows other emerging projects, in particular Spectrum Metals’ Penny West Gold Project which recently was the subject of a company transforming discovery. 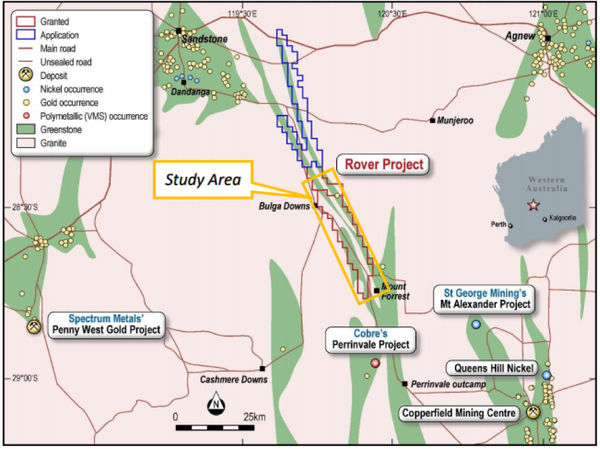 There is now a clear pipeline of targets at a range of exploration stages.

These comprise drill ready targets at Creasy 1 gold and Creasy 2 VMS, and early stage targets under shallow cover that will require further geophysics and geochemistry.

Upon receipt of approvals, TSC will commence drill testing at Creasy 1 and 2, and concurrently develop the prospective pipeline of identified gold, VMS and nickel targets for future drill testing.

With a drilling contractor appointed towards the end of October, it is not out of the question that market moving news could come to hand by the end of December.

While TSC has also had early stage exploration success at its Midas Project, Broken Hill, this mainly points to copper-cobalt mineralisation.

With management keen to focus on precious and base metals at this stage, detailed follow-up exploration at Midas could take a back seat.