Marquee Resources Limited (ASX:MQR) today announced that it has received the assay results from its recent drilling at its Werner Lake Cobalt Project in Ontario, Canada.

Results are highly encouraging for the company and are consistent with previous drill campaigns. Marquee has now completed 18 holes for 4,800m. The company has also completed five metallurgical drill holes for 452m with met-test work now underway.

Marquee expect the assays received from this drilling campaign will increase the existing NI 43-101 Resource of 79,400 Tonnes @ 0.43% Co(a).

Highlights of the Phase 2 drill campaign which has intersected further extensions to cobalt sulphide mineralisation include: 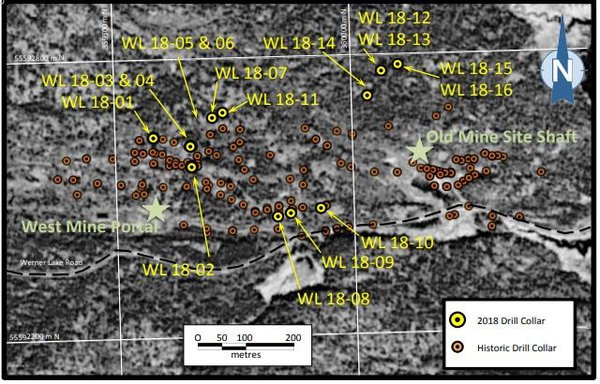 WL 18-08 was drilled on section 359,840 E as can be seen in the figure below. This hole was designed to infill between mineralised intercepts drilled during the 2009-2010 drill program by Puget Ventures Inc. and drilling by Canmine Resources Corp. in 1996-1997. 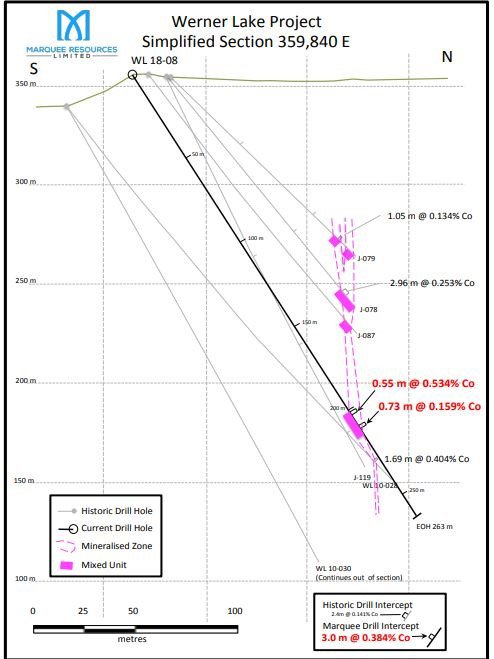 WL 18-09 encountered varying amounts of disseminated sulphides with the most significant intercept recorded at 0.365% Co over 0.89 m, from 253.86 m. Two other zones of copper mineralisation with anomalous cobalt were also intercepted. The results confirm the presence of the mineralised zone and will successfully fill a gap in the current resource model.

Managing Director Charles Thomas was extremely pleased with the results saying: “These latest results further confirm the presence of extensive cobalt sulphide mineralisation at the Werner Lake deposit. We are particularly encouraged by the results of holes WL 18-12 and WL 18-13 which were some of the deepest holes drilled at the project and indicate that the mineralisation does in fact extend to depth and down plunge as suggested by the previous owners of the project. We look forward to reporting the next holes of the Phase 2 drill program shortly as we move towards revising our cobalt resource at Werner Lake.”