Nelson Resources eyes off the next Tropicana

Nelson Resources Ltd (ASX:NES) is a gold exploration company with a portfolio of gold projects located in Western Australia.

The group listed on the ASX in December 2017 and following exploration across a number of its assets, management decided to build a position around its Socrates prospect which yielded promising early stage drilling results.

Phase 2 drilling went on to support management’s view that this was highly prospective territory which was the green light to acquire adjacent and nearby assets on a similar geological trend.

However, before narrowing our focus on the Socrates area which, following the addition of other tenements, is now termed the Woodline project, it is worth examining the company’s other prospects.

From a broader perspective Nelson’s projects are located within the Eastern Goldfields Superterrane of the Yilgarn Craton, which contains substantial greenstone belts, considered highly prospective for gold mineralisation.

The Wilga Well Project is located 9 kilometres east of AngloGold Ashanti’s Sunrise Dam Gold Mine, and historical production at the project included 296 tonnes at 43 g/t gold and 650 tonnes at 11.3 g/t gold.

The two other main projects are Yarri and Fortnum, but little recent work has been done at those tenements as management has been focusing on Woodline, its flagship project which it hopes one day will be a Tropicana scale gold deposit.

The reason for projecting a Tropicana style discovery is based on the similar geological trends which can be seen below.

The AngloGold Ashanti/Independence Group Tropicana project is a low-cost operation that is forecast to achieve fiscal 2019 production in a range between 500,000 ounces and 550,000 ounces. 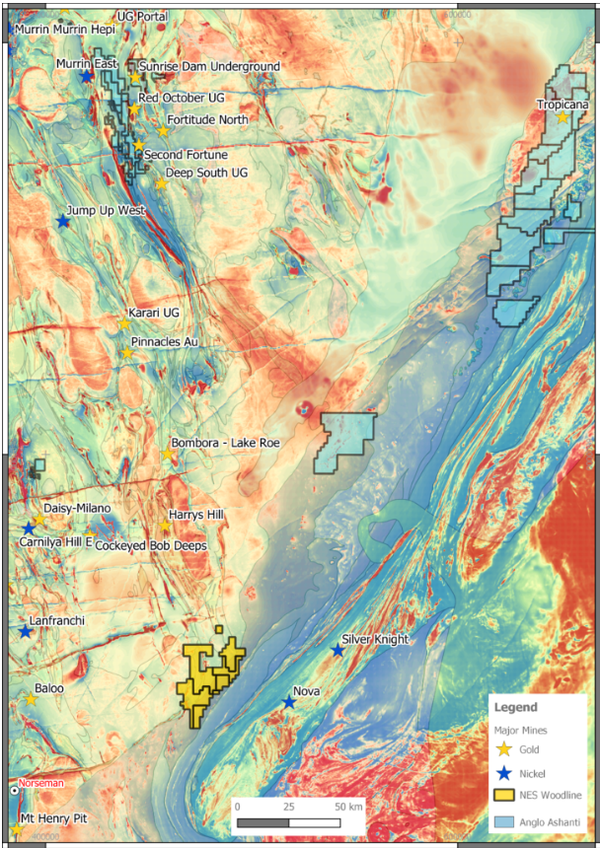 The Woodline tenements (yellow) can be seen in the south-east corner of the map, just to the west of Nova.

To the north-east lies Tropicana, part of a transition zone that has now been identified as a new major Australian gold province known as the Tropicana Gold Belt.

The Socrates prospect is located at the northern part of the project and lies in the Archean greenstone belt which is host to orogenic gold deposits.

At this stage, they are individual projects named Socrates, Grindall, Redmill and Harvey with the latter three located at the south-eastern part of the project in the transition zone between the Archean Yilgarn-Craton and the Proterozoic Albany-Fraser orogen which is a belt of the earth’s crust involved in the formation of mountains. 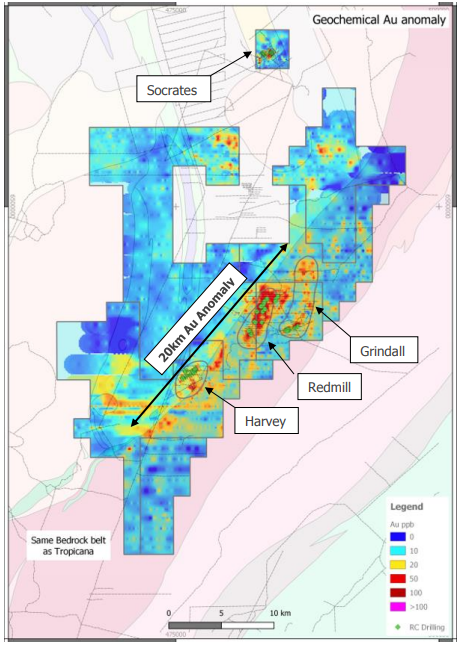 While this gives some background as to the highly prospective geological nature of the Woodline ground, one only has to glance at the numerous star symbols on the Tropicana Belt map to realise that Nelson is definitely in gold territory.

Achievements to date at Woodline

Though Socrates is now just a relatively small part of the overall Woodline Project, it is the area where there has been the most substantial and recent exploration activity, making it a good place to start in terms of appreciating what may lie ahead as Nelson gets busy with the drill bit.

A phase II reverse circulation (RC) drilling campaign conducted in the second half of 2018 identified a gold rich sulphide system at Socrates, a development that resulted in the strike length increasing from 120 metres to 370 metres.

Importantly, the mineralised system remains open at depth, providing management with a significant degree of confidence regarding the delineation of a much larger resource than initially anticipated.

Combining Nelson’s current work with the integration and re-interpretation of historic work by previous owners (Sipa-Newmont Exploration Limited JV) the exploration program has considerably enhanced management’s understanding of the controls and distribution of the gold mineralisation at Socrates.

The latest drilling has confirmed that the mineralisation consists of a series of multiple stacked lodes, which strike 60 to 70 degrees to the north-east, indicating that the optimal drilling direction is 155 degrees to the south-east.

Management highlighted that none of the holes drilled to date by Nelson or Sipa-Newmont have been best orientated to intersect the mineralisation, providing further confidence that a well-directed exploration campaign could uncover something special.

It was just this week that Nelson acquired an additional data package relating to its Woodline/ Harvey Project from MRG Metals Ltd (ASX:MRQ).

The data includes the results of 789 metres of diamond drilling (5 holes) and 1556 metres of RC drilling (7 holes).

This acquisition includes the core “shed” which is the only diamond drilling conducted in the Woodline Project.

Acquiring this data rather than conducting a costly diamond drilling campaign is strategically beneficial in terms of conserving capital.

The historical expenditure by previous owners was approximately $12 million.

Nelson will combine the acquired data with its current comprehensive data set to better understand the structural setting and lithologies of the eastern Yilgarn margin.

This will better guide the company’s future exploration strategy due to it being proximal to Redmill and Grindall, and it also complements previously compiled data.