The Tandarra Gold Project is situated along the Whitelaw Fault, about 40 kilometres north of Bendigo.

As indicated below, Tandarra is just one of a number of highly prospective areas where Navarre is actively exploring. 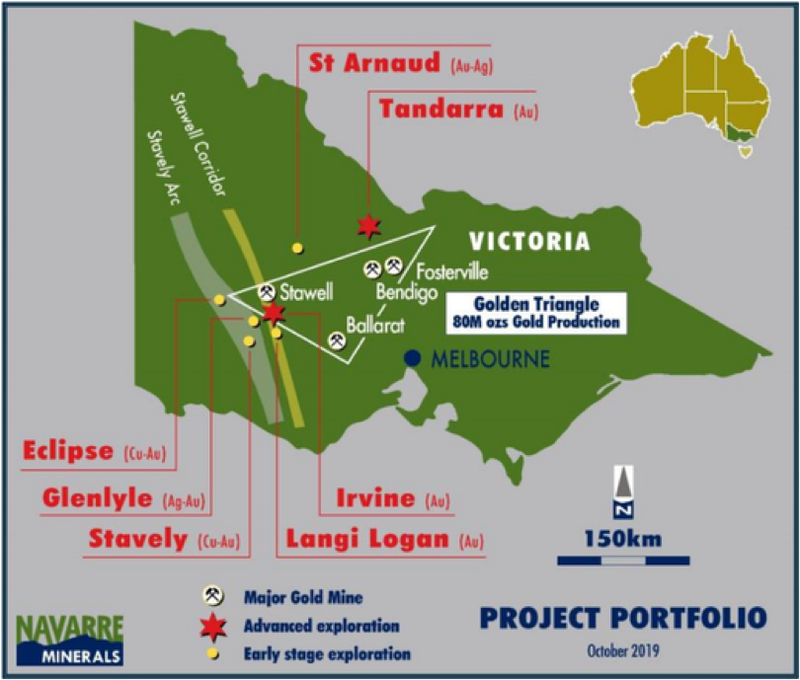 However, focusing specifically on the Whitelaw Fault, it is considered to be the major structural control of gold mineralisation at Bendigo, extending northwards to the Murray River, concealed beneath a blanket of younger, post-mineralisation sediments of the Murray Basin as shown below. 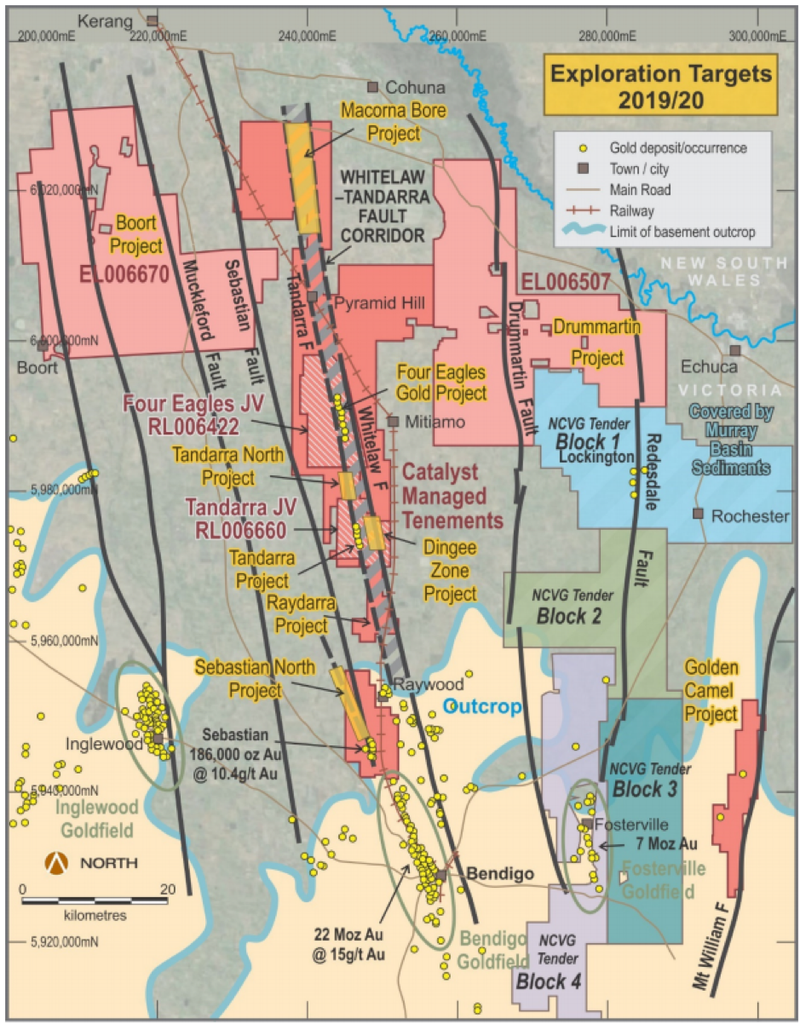 The new zones of gold mineralisation discovered at Tandarra occur in a structural zone of folds and faults which are interpreted to intersect the Whitelaw Fault at depth.

Drilling programs were undertaken beyond the limits of previous exploration to trace the gold mineralised structural zones towards the southern and northern limits of the tenement.

A total of 86 angled air core (AC) drill holes, for 9,956 metres, spaced 50 metres (E-W) along traverses spaced at approximately 200 metres (N-S) were drilled across the projection of the Tomorrow and Macnaughtan gold trends.

As indicated below, drilling was more closely spaced (25-30 metres) immediately south of the Tomorrow zone. 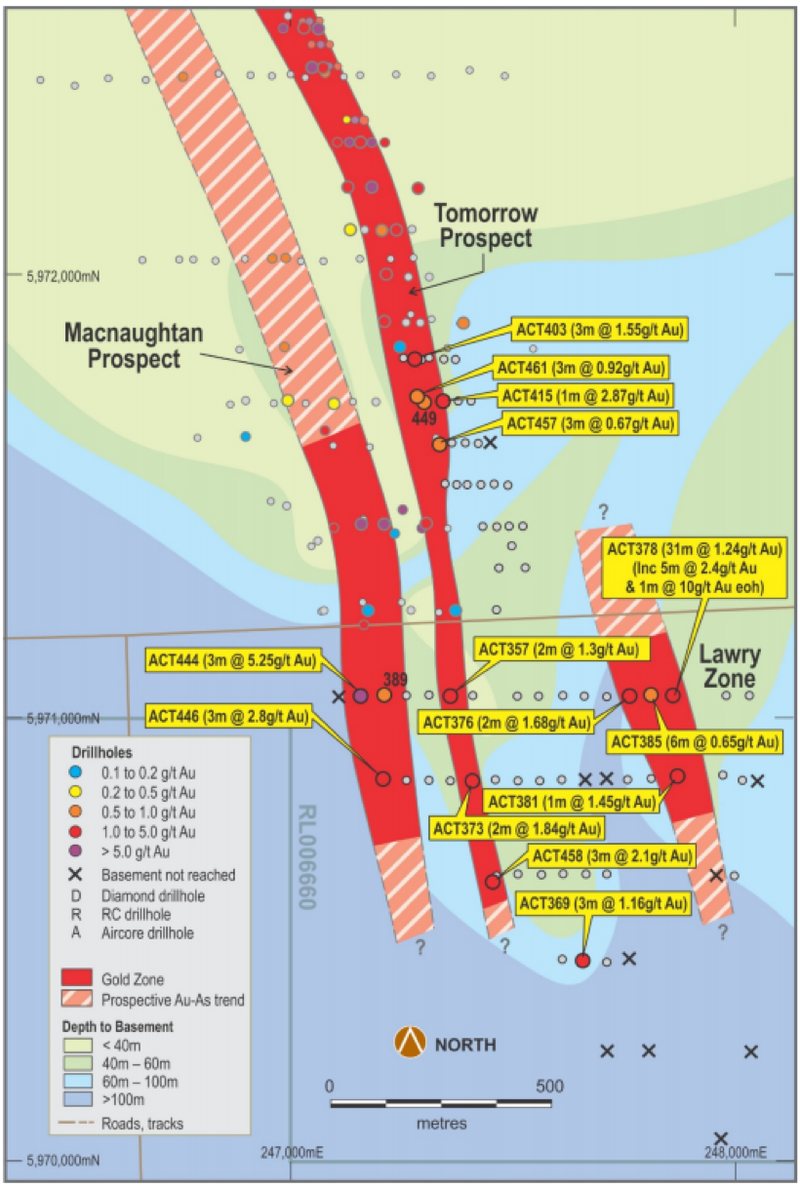 Approximately 750 metres south-east of the southern end of the Tomorrow Zone, assays revealed a new zone of gold mineralisation (the Lawry Zone) on each of two traverses, 200 metres apart, which test the mineralised trend.

The absence of drilling to the north and sparse drilling south leaves the mineralisation open in both directions.

The structural relationship of this newly outlined mineralisation to the southern end of the Tomorrow Zone mineralisation is as yet uncertain, but the success follows the targeting of reconnaissance drilling on the down-plunge extension of structures interpreted from Tomorrow Zone drilling completed in 2019.

There was also one notably wide intersection of 31 metres at 1.24 g/t gold in the Lawry Zone.

Five hundred metres to the west of the new discovery, gold mineralisation on several traverses potentially comprises a 1,200 metre long southern extension of the Tomorrow Zone.

This mineralisation aligns with the new body of shallow mineralisation where intersections included 3 metres at 2.1 g/t gold from 78 metres, along with other similar size sections as indicated on the diagram.

A further 200 metres to the west, abundant quartz veining and Au-As assays clearly demonstrate the southerly extension by 400 metres of Macnaughtan mineralised zone, also remaining open to the south.

Follow up drilling is proposed for each of the three zones of mineralisation identified in the current program by drilling at reconnaissance scale.

Scope for further exploration success to the north

To the north, anomalous arsenic values of more than 50 parts per million were frequently observed in drill holes along the Tomorrow-Macnaughtan trend on each traverse, indicating continued prospectivity for gold mineralisation, considering the association between gold and arsenic in better mineralised areas.

A similar reconnaissance program was conducted in this region.

This was undertaken between the northern end of Tomorrow-Macnaughtan gold zones and a previously reported significant intersection (ACT221) in the extreme north of the lease.

Having regard to the wide spacing between traverses it is considered that this 7 kilometre zone warrants follow up AC drilling, albeit with a lower priority than the mineralisation outlined in the south.

Underlining the promising nature of these results, Catalyst’s Technical Director Bruce Kay said, “The discovery of high grade gold in a third mineralised structure and the demonstration of gold mineralisation in multiple zones over previously undrilled strike lengths of more than 200 metres, remaining open to the south is a highly encouraging outcome from this first-pass program.”

Planning for follow-up phases of AC and RC drilling is underway, potentially to be undertaken during the coming quarter, subject to weather conditions through the autumn and any health and safety considerations and government restrictions arising from the COVID-19 global pandemic. 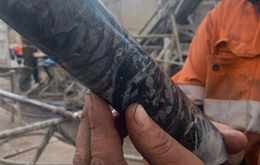 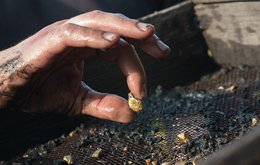 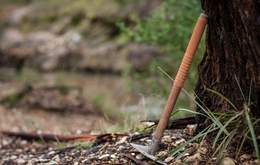