Is Navarre a Stavely in the making? 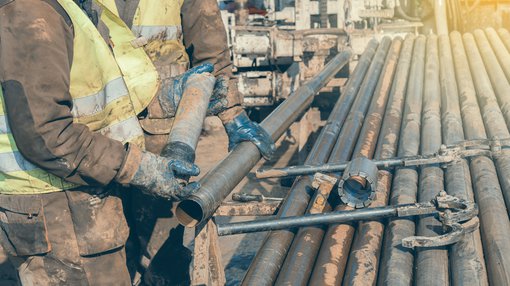 On September 26, 2019, Stavely Minerals Limited (ASX:SVY) informed the market that it had made a significant shallow high-grade copper-gold discovery at the Thursday’s Gossan prospect, part of its 100%-owned Stavely Copper-Gold Project in Victoria.

The company noted that it had received assay results for the first diamond hole targeting shallow structurally controlled mineralisation.

The hole intersected a thick zone of shallow high-grade copper-gold-silver mineralisation with stunning grades of up to 40% copper.

Together with visual observations of drill core from a second step-out hole located 160 metres to the south-west, which has also encountered a thick zone of massive to semi-massive mineralisation over a down-hole width of approximately 60 metres, the drilling represented a major exploration breakthrough.

Indeed, this was a transformational development for the company which resulted in its shares increasing from 24 cents prior to the news being released to 86 cents in one day’s trading.

Further promising results have seen the company trade as high as $1.42, representing a gain of about 500% since the discovery was announced.

Within a fortnight, Staveley released further results from step-out diamond drilling located 160 metres along strike to the south-east of the discovery hole with assay results featuring 8 metres at 9.7% copper, 0.4 g/t gold and 16.8 g/t silver from 177 metres.

There was also a much thicker intercept of 59 metres at 1.8% copper similar proportionate gold and silver delineated.

As shown below, Staveley’s project map highlights the Thursday Gossan Copper Deposit, as well as the company’s other holdings and tenders under process, including a significant tenement holding (EL5425 – shaded in green) abutting several areas around Thursday Gossan, the subject of a joint venture with Navarre Minerals Ltd (ASX:NML). 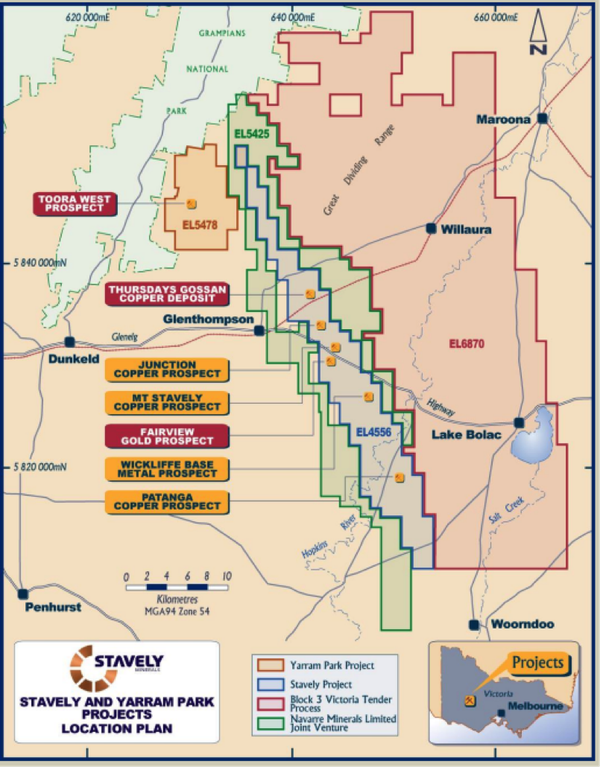 Thursday Gossan is the subject of a joint venture with Navarre Minerals Ltd (ASX:NML).

However, what the map doesn’t show is some of Navarre’s wholly owned projects that are not only close to Thursday Gossan, but along strike from the new discovery. 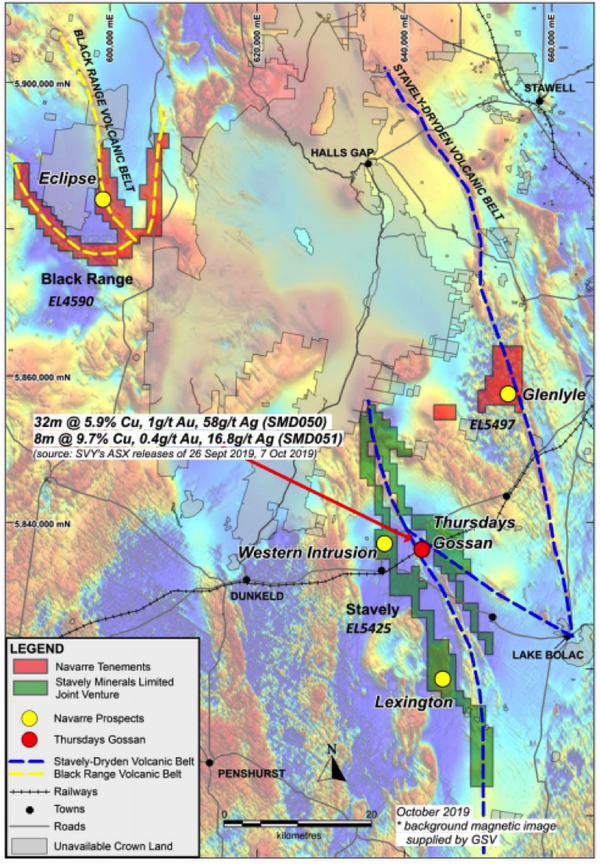 Within approximately 100 kilometres of Stavely Arc volcanics, including the Eclipse, Glenlyle and Stavely project areas, the volcanics within the WVCP are mostly concealed by younger cover rocks.

Small windows of basement exposure have led to discovery of a number of copper and gold prospects such as Eclipse and Lexington.

The Stavely Arc is recognised as a continental margin arc setting similar to the Andes in South America, host to some of the world’s largest known copper deposits.

‘’Stavely Minerals may earn up to an 80% equity interest in Exploration Licence EL 5425 from Navarre by spending $450,000 over a five year period.

‘’Stavely has indicated they intend to commence drilling a 400 metre diamond core hole in late October 2019 at the northern prospect in the JV tenement.’’

The anomalous zone remains open to the north, south and at depth.

Due to the potential for VMS mineralisation, the company will conduct an electromagnetic survey over the prospective area to support drill targeting.

Management views Glenlyle as an early stage project with potential for polymetallic mineralisation hosted in either porphyry, epithermal or VMS settings.

It is worth noting that relatively deep diamond drilling was required to delineate the outstanding grades identified at Thursdays Gossan.

Consequently, Navarre’s early stage returns from shallow AC drilling could represent the tip of the iceberg.

Looking retrospectively at Thursdays Gossan, these are the consistent but not stunning reverse circulation drilling results that encouraged management to conduct the diamond drilling program which uncovered a wealth of riches. 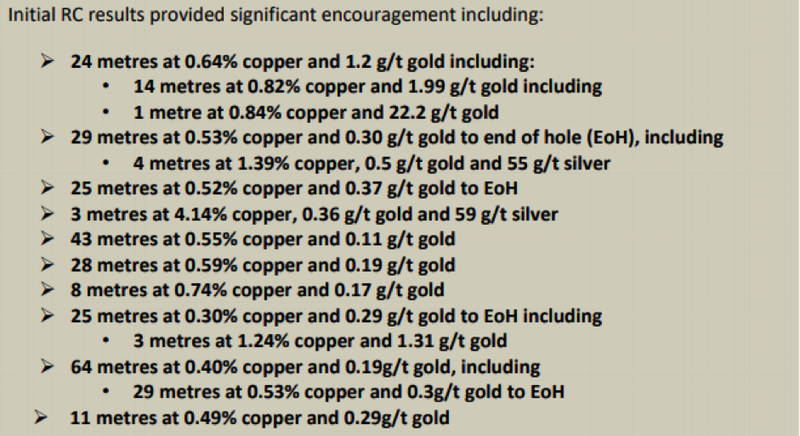 The diamond drilling program uncovered a wealth of riches.

Note that the highest grade gold section with a significant width is 24 metres at 1.2 g/t gold.

Indeed, most of the intersections recorded gold grades well below 1 g/t gold.

In December, the company expects to start a 9000 metre AC, RC and diamond drilling program which will target the Glenlyle and Eclipse prospects, with the latter lying within the Black Range Volcanic Belt situated to the north-east on the above map.

In terms of determining whether Navarre could be the next Staveley, high-volume trading that occurred on the back of the Thursdays Gossan news suggests that there is some smart money banking on that being the case.

The company’s shares doubled as investors made the connection, suggesting upcoming drilling results should be closely monitored.