The Irvine basalt dome occurs within a prospective corridor of rocks that host the 5 million ounce Stawell and 1 million ounce Ararat goldfields located along the western edge of the Stawell Geological Zone, 210 kilometres west of Melbourne.

The new results are for the first eight diamond holes of an ongoing program designed to test for depth extensions to shallow gold discovered in air-core (AC) drilling at Resolution Lode.

As indicated below, there were other relatively high-grade sets in widths between about 2.5 metres at 3 metres at depths ranging between 300 metres and 400 metres. Best hole open to the west and down plunge

Highlighting the tenor of these results, Navarre’s managing director Geoff McDermott said, “These terrific diamond drill results from Resolution Lode are providing strong evidence for gold-shoot development, similar to that mined on the flanks of the Magdala basalt dome at Stawell’s 4 million-ounce Magdala Gold Mine, on-strike 20 kilometres further north.

"The geometry and tenor of the two main gold zones identified at Resolution Lode are continuing to evolve.

"The recognition of an apparent gentle south plunge to the gold shoot geometry has provided an important geological break-through, allowing us to better target subsequent drilling to expand these gold zones at depth.

"Drill hole RD025 is an example of this new understanding, despite terminating in 6.4 g/t gold mineralisation at 158 metres due to technical issues.

"RD025 is also our southern-most diamond hole and has returned one of our best and widest gold intercepts that remains open to the west and down-plunge.

"Drilling is continuing to systematically evaluate the size, continuity and tenor of gold mineralisation at Resolution Lode in order to see if it has what it takes to deliver Victoria’s next major gold deposit.” 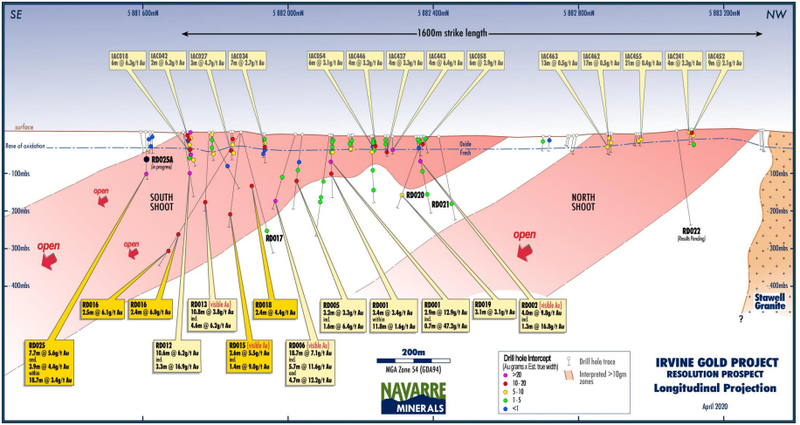 Drilling results likely to lead to improved rate of success

This is viewed as a significant exploration breakthrough for the project and is expected to lead to improved design, targeting and, potentially, rates of success for subsequent expansion drill testing for this lode-style mineral system.

The significant gold results returned from hole RD025 is a consequence of adjusting the drill program to test the southern plunge theory.

To date, this is the most southerly diamond hole in the program but, unfortunately, the hole ended prematurely at 158 metres in a wide zone of mineralisation after suffering a technical issue.

A much anticipated drill hole RD025A is currently underway to test the full width of the mineralised structure at this position.