Navarre Minerals Limited (ASX:NML) has provided an update on exploration activities within the Stavely Arc of Western Victoria.

The volcanics within the Stavely Arc are mostly concealed by younger cover rocks. Small windows of basement exposure have led to the discovery of a number of copper and gold prospects such as Eclipse and Lexington.

The Stavely Arc is recognised as a continental margin arc setting similar to the Andes in South America, host to some of the world’s largest known copper deposits. Navarre is targeting large VMS, porphyry copper – gold and epithermal deposits. 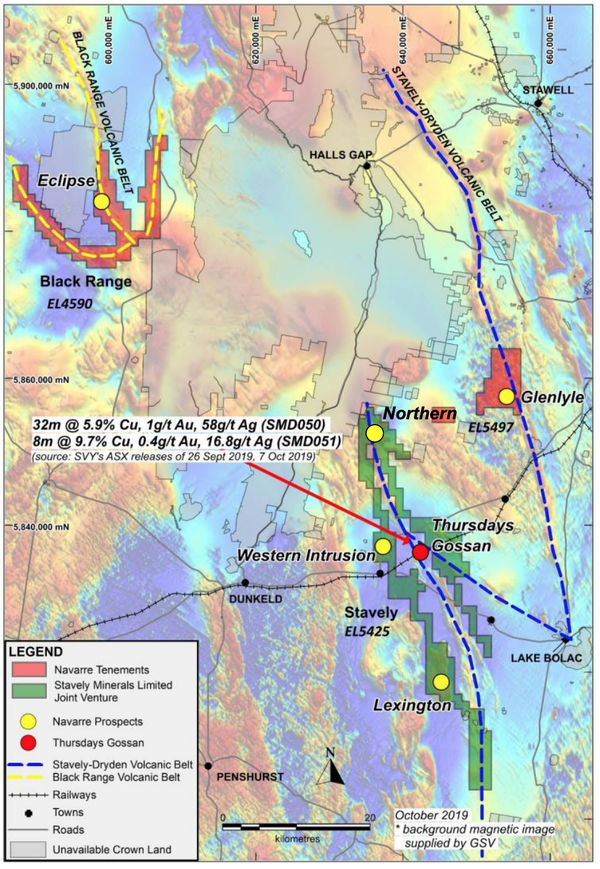 The Black Range Project captures three fault-bound segments of the Stavely Arc volcanics. The Project area includes the Eclipse prospect where a supergene blanket of enriched copper (chalcocite) mineralisation has developed above widespread copper, gold and zinc mineralisation, interpreted to be associated with a potential deeper source of possible VMS or porphyry affinity.

The Company has commenced a 1,200m diamond drilling program (3 diamond holes) to test a large induced polarisation geophysical chargeability anomaly beneath the shallow chalcocite mineralisation. Results of the drilling are expected to be reported in 1Q20 following completion of the program.

The Glenlyle Project occurs in the Stavely Arc where regional geophysics indicate a possible circular intrusive at depth with potential for porphyry, epithermal and VMS mineralisation as indicated by other prospects in the Stavely Arc. Shallow air core (AC) drilling to date at Glenlyle has identified a silver-gold anomaly at least 150m wide with grades of silver up to 390 g/t, gold up to 4.0 g/t, zinc up to 0.7% and lead up to 0.3%.

The anomalous zone remains open to the north, south and at depth. Due to the potential for VMS mineralisation and Thursdays Gossan skarn-style copper mineralisation, the company has expanded its plans for geophysical surveys and will undertake a VTEM survey over the entire exploration licence area to support drill targeting.

The survey is anticipated to occur in late January 2020.

The Northern prospect is interpreted to comprise two Cambrian intrusions within ultramafic and volcanic units of the Stavely Belt and is considered to have potential for porphyry copper-gold and epithermal gold mineralisation. The prospect occurs at the intersection of the northwest-trending Elliot Belt and the northerly-trending Stavely Belt in a similar structural setting to Thursdays Gossan.

The prospect has been partly tested by historical shallow AC drilling which recorded ultramafic, sandstone and intermediate volcanic lithologies containing some anomalous copper and gold.

The AC drilling did not resolve the presence of demagnetised zones within the ultramafic and intermediate volcanic units of the Stavely Belt. 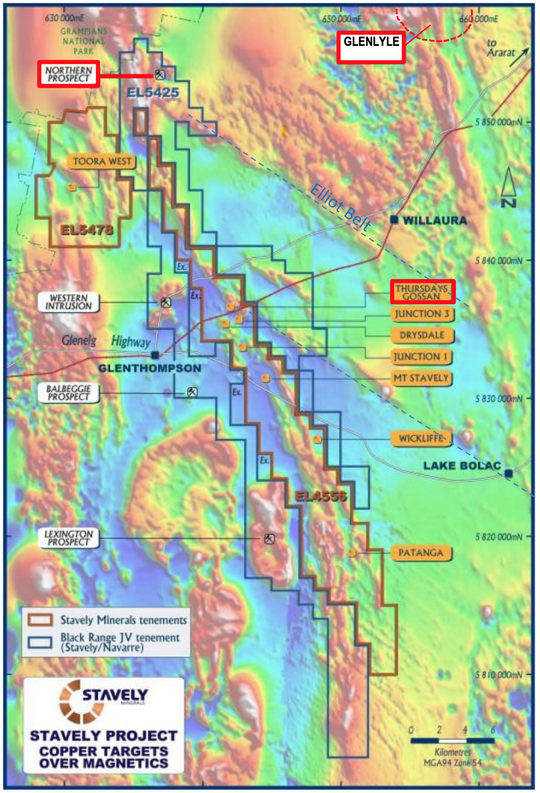