Navarre collaborates with CSIRO on its Stawell Gold Corridor Project

Navarre Minerals Limited (ASX:NML), which has a portfolio of early to advanced stage gold and base metals projects in Victoria, today announced it has commenced a collaborative research project with Australia’s national science agency, CSIRO Mineral Resources Division, at the Stawell Corridor Gold Project in western Victoria.

Navarre was recently awarded the grant under the Innovation Connections scheme of the Australian Government’s Department of Industry, Innovation and Science Entrepreneurs’ Programme that will assist with funding a collaborative research programme with CSIRO to identify potential sites of gold mineralisation along the flanks of the Irvine and Langi Logan basalts within Navarre’s Stawell Corridor Gold Project.

The Irvine and Langi Logan basalts are part of the company’s Stawell Corridor Gold Project, in an extension of a corridor of rocks that host the Stawell (~5Moz) and Ararat (~1Moz) goldfields.

The discovery of outcropping gold on the margins of the Irvine basalt dome and high-grade gold in shallow drilling at Langi Logan are a prime focus for the company. 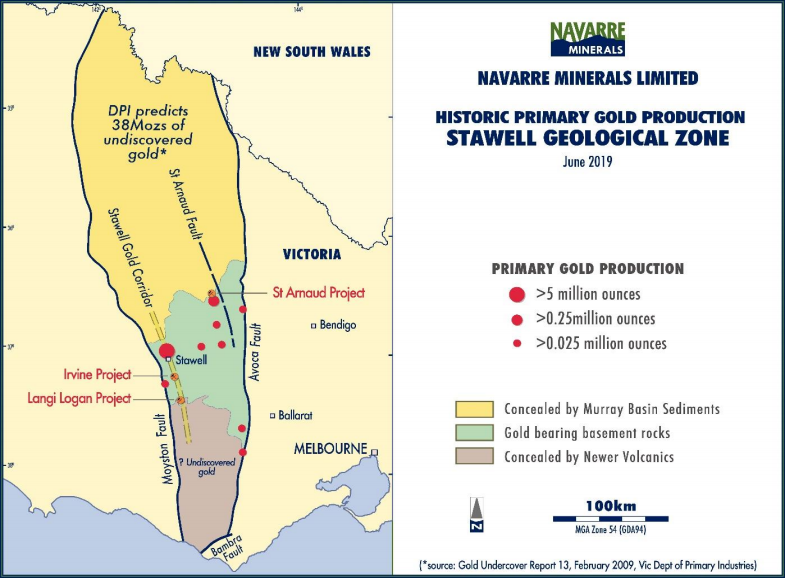 The research project will use the latest advanced technologies, including supercomputer-based simulations of deformation-fluid flow transport processes involved in the formation of gold deposits, to aid exploration by highlighting potential drill targets on the flanks of the Irvine and Langi Logan basalt domes.

The first step in the research involves collecting representative samples from diamond drill core from the Irvine Gold Project of both mineralised and host rocks to characterise their varying petrophysical properties including magnetic, gravity and electrical responses.

The petrophysical characterisation is expected to improve understanding of the origin of the different geophysical responses and if those responses are related to gold mineralisation.

This will support further interpretation and modelling of Navarre’s existing geophysical data to more accurately model the distribution and geometry of basalt domes at depth, including the effects of faulting.

The second step in the research project is to simulate the deformation driven fluid flow and heat transport processes involved in the mineralising event using a supercomputer. The results of the models have the potential to indicate prospective sites for mineralisation by identifying locations with optimal fluid focusing.

In summary, the research project will use the latest advanced technologies to identify broad areas of high fluid flow in order to reduce the search space and direct drill testing towards areas of potential concealed gold mineralisation.

Research will be coordinated by CSIRO in Perth with completion of data collection and computer modelling expected by April 2020. It will be led by Dr Peter Schaubs, Team Leader (3D Structural Geology and Numerical Modelling) who is an accomplished structural geologist with intimate knowledge of Victorian gold deposits.

Navarre considers there is significant potential to apply computer simulation not only for high-grade gold mineralisation at depth at Irvine and Langi Logan but also for the five other basalt dome targets yet to be appraised within the Stawell Corridor Gold Project.

“The research will aim to identify potential high fluid flow sites at our Irvine and Langi Logan basalt dome projects for drill testing.”