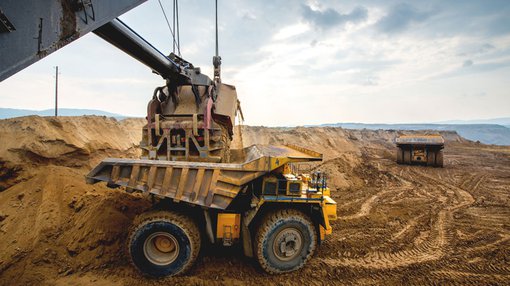 MZI Resources (ASX: MZI) has continued its transition from explorer to producer with strong first-quarter operating cash flow of $7.5 million. From an operational perspective, mineral sands production from its Keysbrook project located in Western Australia was up 24% to circa 13,400 tonnes. Mined grade was up slightly from 2.47% in the previous quarter to 2.53% heavy minerals.

Quarterly product sales of 10,000 tonnes generated sales revenue of $6.8 million. Another highlight of the performance was a significant improvement in plant performance.

On this note, Managing Director Trevor Matthews said, “At the operational level we achieved significantly improved plant performance ahead of the $2.3 million upgrade of spirals and screening equipment in the Keysbrook Wet Concentrator Plant which commenced in late September”.

Completion and commissioning of these upgrades is expected in November and this should have a substantial impact on earnings for the six months to June 30, 2017.

While the last 12 months has been an important period for MZI in terms of coming into production and securing important offtake agreements for its premium L88 product, as well as L70 and zircon concentrates, it also represents the foundations for expansion of the Keysbrook project which will maximise its potential 15 year reserve life. 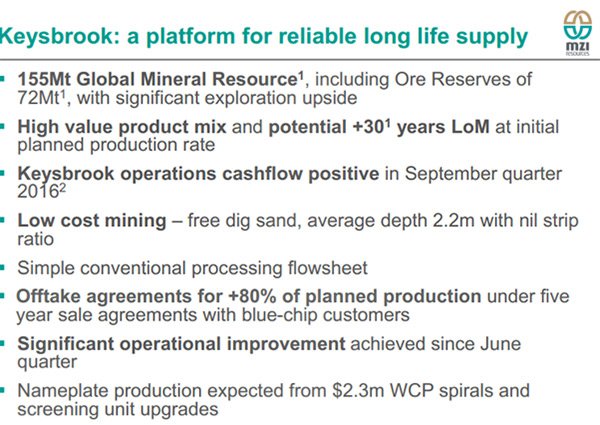 Matthews announced the appointment of Rod Baxter as Chairman who has more than 25 years’ experience in the global resources and engineering sectors, making him well versed in understanding all facets of mining from digging to processing and tapping into end markets.

Today’s upbeat news coincides with a strengthening in commodity prices, particularly the group’s higher value products such as leucoxene.

Shares in MZI have come off slightly in the last week, perhaps providing a buying opportunity given this morning’s opening price of 34 cents (+6.2%) represents a steep discount to Bell Potter’s 12 month price target of 56 cents.

However, it should be noted that historical trading patterns, as well as broker forecasts and price targets may not be an accurate indication of the company’s future performance and as such investors should seek independent financial advice if considering this stock.

David Coates from Bell Potter was expecting MZI to be free cash flow positive in the September quarter, indicating that box has been ticked. It is now up to MZI to execute on operational upgrades in order to deliver a strong second half performance.

Coates is forecasting MZI to generate a net profit of $13 million from sales of $75 million in fiscal 2017, representing earnings per share of 7 cents. This implies a PE multiple of approximately 4.5 relative to Tuesday morning’s opening price.

Myanmar shares rally on back of drilling