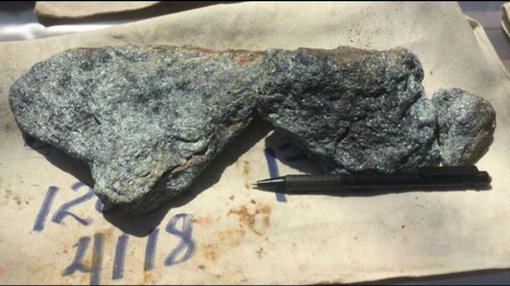 Metals of Africa (ASX:MTA) will start drilling at its Balama Central graphite project over six weeks after rock chip samples brought up grades of up to 17.55% total graphitic carbon (TGC) and 0.364% Vanadium.

The ASX-listed company has been conducting an ongoing pitting program at the Balama Central Project to test an anomaly brought up by a previous VTEM survey.

MTA had told shareholders that visual estimates from the rock chip program ranged from 5-20%, but given those were visual estimates only it had to wait to get assays back from the lab to be sure of what it had found.

It told shareholders today that it had assay results of up to 17.55% TGC, with average grades from samples reaching 9.05% TGC with Vanadium of 0.15%.

MTA also said coarse graphite flake size was observed to be between 0.5mm to 1mm.

The VTEM survey combined with the assay results has refined an area of exploration – the Lennox Prospect, which is part of a strike more than 1km in length.

The Lennox Prospect will be tested with the drillbit over six weeks, with 12 core holes for a total of 1000m planned.

It had previously told shareholder that it would drill at Balama Central during the fourth quarter, aiming to firm up a maiden JORC resource for the project.

The Balama Central Project is along strike from Syrah Resources’ (ASX:SYR) major graphite project, in the prolific Cabo Delgado province in Mozambique. 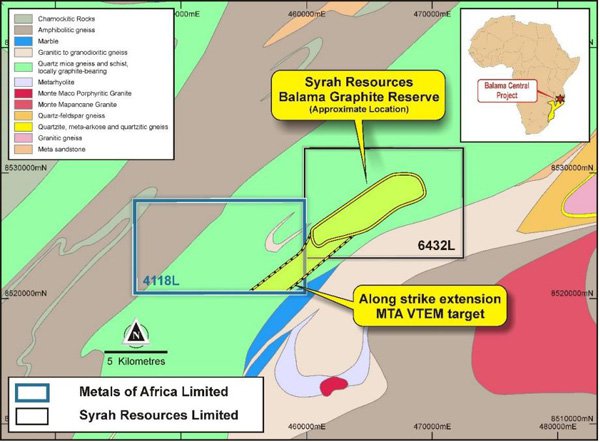 SYR recently announced that it would start production at its project in 2017 – in the process becoming the largest producer of graphite in the world.

Syrah has a resource of 1.15 billion tonnes of raw material with 10.2% graphitic carbon and has a market cap of $640 million.

MTA has a raft of projects on the menu though, and three projects on its plate, with its two graphite projects in Mozambique and a zinc-lead project in Gabon.

The Balama Central Project is one of the projects in Mozambique, and it recently farmed out its non-cored Montepuez East project to a ruby hunter, allowing MTA to focus on its Montepuez Central, Balama Central, and Kroussou lead and zinc project in Gabon.

Metals of Africa hoping for gem of a deal