In a week Blackham Resources (ASX:BLK) is due to reveal its definitive feasibility study, it has found new repeating lodes at its Matilda Mine – the main source of initial ore for its operations.

At the M6 North pit, drilling identified a new high grade shoot immediately north of the existing pit, which was mined in the early 1990s.

Interestingly, BLK said the north shoot is one the same gold mineralised structure as the M1 deposit, which is 800m to the north and also part of the Matilda mine.

It said more drilling on the shoot would take place over the coming days.

Meanwhile, it has discovered a new lode at the planned waste dump location for the mine.

BLK was conducting aircore sterilisation drilling of the location when it discovered a new gold mineralised structure between the M10 east shoot and the M4 pit, extending for 600m.

Again, follow-up drilling is due in the coming days. 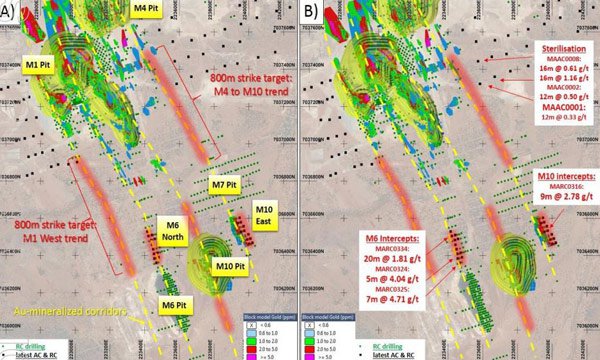 News of the drilling came just days before BLK is due to release a long-awaited definitive feasibility study for its Matilda Gold Project.

Ore from the Matilda mine is expected to make up the majority of the ore fed into the plant for processing, with gold sourced from quartz reefs set to be fed to provide an average higher-grade feed into the plant.

BLK also said that it would update its reserves position within days.

The aim is to start producing gold mid-year, with the first stage of production to utilise soft oxide and free milling, using the existing resources at the Matilda Mine, with additional gold ores coming from the high grade reefs like Golden Age, Galaxy and Caledonia.