The company announced the verification of significant cobalt-copper-lithium mineralisation.

Mineralisation on the surface was confirmed by rock chip assays, which show up to 1.47% Co and 0.54% Cu. A highlight is the elevated lithium results in this round of exploration – critically, within weathered material – and grades of up to 0.71% Li2O.

Additional veins were also encountered. All remain open along strike and dip.

The table below shows the results of the 16 second round field grab samples: 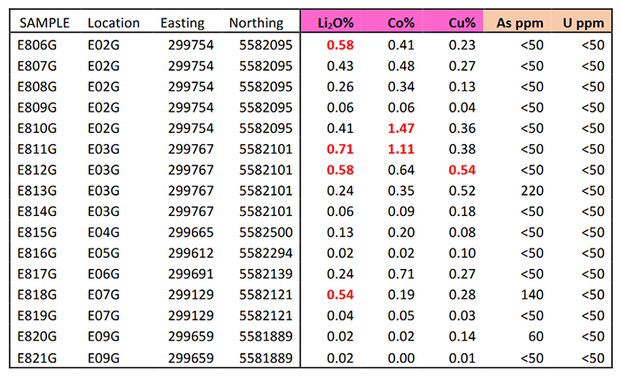 Locations were surveyed with hand-held GPS and are in UTM zone 33N.

The historic sample pits (below) are in orange and the targets highlighted with ellipses: 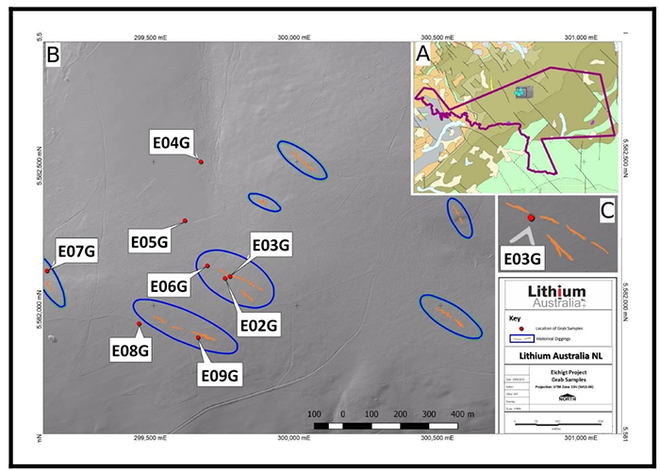 These early results for cobalt and copper confirm polymetallic mineralisation within the project area. Deleterious elements, including arsenic and uranium are very low in concentration.

Of course the stock remains speculative at this stage, so investors should seek professional financial advice if considering LIT for their portfolio.

The cobalt occurs in association with iron- and manganese- as part of a polymetallic gossan formed at surface above an extensive vein system. The oxides are enriched in lithium. This style of mineralisation has not been previously described in the region.

LIT uses disruptive extraction processes to convert all lithium silicates to lithium chemicals, from which advanced components can be created for the battery industry.

It was granted the 133km2 Eichigt exploration licence in January this year, in addition to its Sadisdorf project, which is also in Saxony.

Mining in Eichigt stopped in the 17th century, and there has been little modern exploration undertaken since. LIT’s initial sampling program focused on testing mineralisation of iron and copper-bearing quartz veins that were subject to small-scale mining activities during the 16th century. The area is known to host a buried granite cupola, prospective for volatile metals and lithium-bearing greisens.

LIT is working to establish a central processing hub in Europe to support battery production for the rapidly expanding electric car industry. It plans to use its 100% owned SiLeach® process to recover lithium from its German projects, should doing so prove economically feasible.

The company’s managing director, Adrian Griffin, said: “The results of the first exploration campaign at Eichigt strongly supports our view that the license area we applied for was neglected during systematic exploration work carried out during the time of the GDR.

“The combination of cobalt, lithium and copper is an indication of the genesis of the mineralized system and the strong possibility of finding source granites and greisen style mineralization we see nearby at Sadisdorf.

“The historic diggings indicate the strike extent, albeit remaining open. The down-dip extensions will be evaluated after delineation of the extent of surface mineralization.”