Minbos shares fire up as company progresses towards DFS stage

Shares in Minbos Resources Limited (ASX:MNB) traded 20% higher on Tuesday morning after management announced that as part of its Cabinda Phosphate Definitive Feasibility Study (DFS), the had signed a contract with the FEECO International for the basic engineering package associated with the planned granulation plant major equipment.

Minbos won an international tender for the Cabinda Phosphate Project in March 2020.

Along with its in-country partner Soul Rock Ltda (15% carried interest), Minbos won the tender based on producing Enhanced Phosphate Rock as a substitute for fertilisers currently imported by the Angolan Government for distribution to wholesalers and farmers.

The endgame is the development of a nutrient supply and distribution business that provides food security to Angola and the broader Middle African region.

Coronavirus increases spotlight on the need for food security

The timing of this project couldn’t be better with the global-focused Food and Agricultural Organisation (FAO) recently highlighting that the strengthening of food production and distribution systems is the key to fighting hunger, and in turn, addressing disease issues that are affecting the world.

Bloomberg recently reported "as many as 132 million more people than previously projected could go hungry in 2020, and this year’s gain may be more than triple any increase this century".

Food supply issues are being exacerbated by COVID-19, which is projected to cause more people to die each day from hunger than from virus infections. 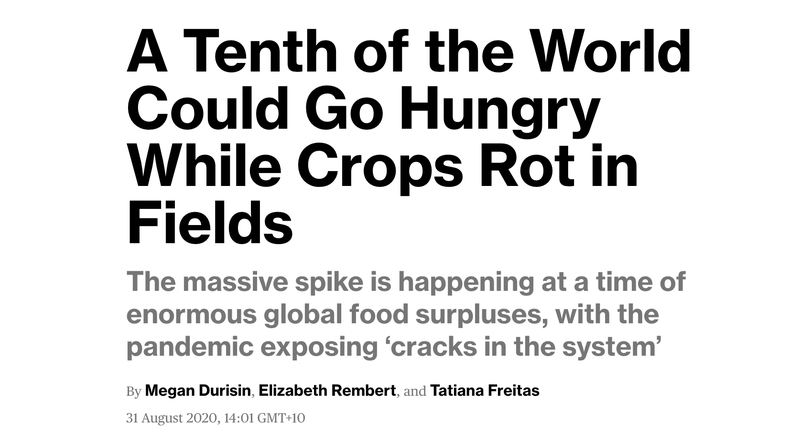 The FAO said that the world is ‘’hurtling towards an unprecedented hunger crisis exacerbated by the impact of coronavirus’’ as it has upended food supply chains, crippling economies and eroding consumer purchasing power.

In part, the FAO said, ‘’Some projections show that by the end of the year, Covid-19 will cause more people to die each day from hunger than from virus infections.’’

As the following map shows, the African region continues to struggle and it will be one of the hardest hit in terms of food security, making it most in need of projects such as those being developed by Minbos. 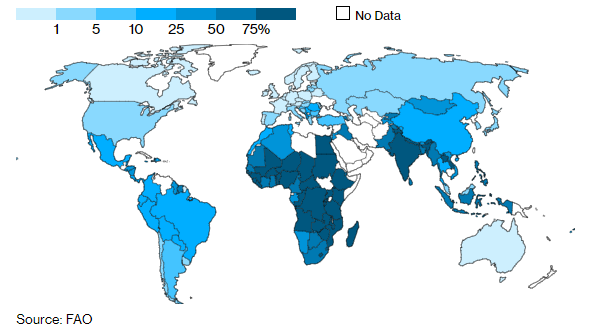 Harking back to the precursor activities to a DFS, the contracted organisation FEECO provides industry-leading detailed plant engineering and manufacturing to the fertiliser and agriculture industry, constructing complete fertiliser systems for turnkey production facilities, including bulk material handling, granulation technology and control systems.

During August 2019, the IFDC performed one week of pilot plant trials and granulation testing to help determine the technical and financial feasibility of manufacturing and blending, producing 400 kilograms of Cabinda Blend, which is currently being used for in-country field trials.

FEECO is preparing a basic engineering package as part of the major equipment supply package, one of the essential elements in completing the upcoming DFS that will build on results of the Cabinda Phosphate Project Scoping Study released last week which demonstrated the project to be technically and financially robust.

The plus/minus 35% scoping study estimated an after-tax NPV of between US$159 - 260 million based on a pre-production capital estimate of between US$22 – 28 million.

As indicated below, Minbos has made substantial progress in other areas of planning, and with the basic engineering package running through to the December quarter, the company is approaching key milestones that could well be market moving. 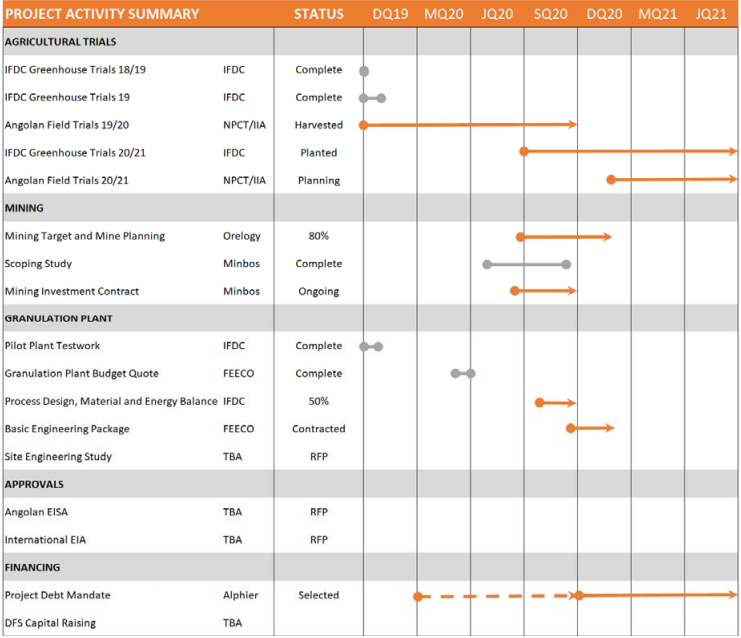 Consequently, while the company’s shares have increased three-fold in the last three weeks, there is the potential for more upside, particularly given that the recent spike has only captured the inherent value of the step-change in the company’s progress, being the completion of the Cabinda Scoping Study.