Minbos Resources Ltd (ASX:MNB) is poised to realise its goal of building a nutrient supply and distribution business that stimulates agricultural production and promotes food security in Angola and the broader Congo Basin.

Management’s vision is to mine Phosphate Rock from the Cácata Deposit and transport it to Porto de Caio where a granulation plant will be built and operated at the industrial site to produce Enhanced Phosphate Rock granules (Phosphate Rock + MAP).

‘’Phosphate Rock’’ is the industry term used to describe sedimentary apatite deposits, but in the case of Cácata, “Phosphate Sand” would be more appropriate. The deposit is hosted in loosely consolidated sediments that can be mined without blasting or ripping.

Infrastructure is key to all industrial mineral projects and Cácata is well supported, with the deposit being situated within a kilometre of a dual lane highway and a one-hour drive to Porto de Caio, a billion-dollar port and industrial development.

As indicated below, Porto de Caio is the ideal location for a granulation plant due to its proximity to the mine and access to infrastructure.

However, before examining the proposed project in more detail it is worth appreciating the story behind the Cabinda Project.

Management demonstrates its determination to succeed

In March this year, Minbos was successful in securing the open tender for the Cácata Phosphate Concession, including the area previously held by the company in Cabinda, Angola.

Progressing the Cabinda Phosphate Project since the initiative was launched in 2010 has been a long time in the making, resulting in the company’s shares receiving little interest in recent years.

However, understanding the reasons behind how this has played out is arguably a key factor in appreciating the valuation likely to be attributed to the Minbos of the future.

It is worth noting that within three months of Minbos commencing drilling at the Cabinda Project in November 2010 its share price surged 200% to approximately 30 cents.

Furthermore, the events that have unfolded underline management’s unwavering commitment to the Cabinda Phosphate Project which following a scoping study published today is now proven to be technically and financially robust.

This study will be used to initiate discussions with debt and equity financiers for the construction of the project, as well as framing the scope of works for a definitive feasibility study.

History in the making

Minbos listed in October 2010 at which time the Cácata licence was held in a joint venture with Israeli based Petril Phosphates Ltd (Petril) through an agreement which required each partner to contribute 50% of the expenditure to complete exploration activities and a pre-feasibility study.

Petril was responsible for the preparation of programs and budgets and maintaining the mineral licenses in good standing.

In 2016, an attempt was made to consolidate the ownership structure of the Cabinda Project with a proposed merger which didn’t materialise because Minbos was frustrated by the lack of progress, determining a year later that the merger was no longer in the best interests of shareholders, resulting in termination of the agreement.

As chief executive and substantial shareholder, Lindsay Reed continued to engage with Petril offering to either purchase or sell the remaining interest in Cabinda in order to progress the project.

Petril was unwilling to purchase the Minbos interest, and only prepared to sell at several multiples of the price Minbos was prepared to pay.

As a result, the Board took the view that value was unlikely to be realised from the project under the prevailing ownership structure and wrote down its entire investment in the Cabinda Project in June 2018.

In late 2018, the Angolan National Directorate of Mineral Resources issued a Notice of Termination for the Cabinda Project, citing as cause, the lack of progress and the licences were forfeited.

In June 2019, the Republic of Angola’s Ministry of Mineral Resources and Oil (MIREMPET) formally launched a public tender for certain Mining Rights Grants, which included the area covered by the Cabinda Project.

With the help of its in-country partner, Mr Camache Caturichi, Minbos put together a plan to lodge a tender document.

Despite not having any ownership interest after the Notice of Termination was received, Minbos continued to push ahead with the Cabinda phosphate agronomic research and development programs, an initiative that played a key role in the company’s successful tender.

Consequently, this has been a gritty performance by management, and its hard work and passion for the Cabinda Project has paid off with the company’s bid being successful.

The cliché ‘’and the rest is history’’ is more likely to be applied after the next chapter is written, being the successful development of a 21 year mine life operation that is anticipated to generate EBITDA in a range between US$747 million and US$1.1 billion, implying a mid-range after-tax internal rate of return of approximately 50%.

Importantly, due to the high grade of the mine production target which can be utilised without beneficiation in the granulation plant, the project involves nominal pre-production capital expenditure relative to the returns.

With average annual production of about 370,000 tonnes and the average sale price more than US$100 per tonne above life of mine cash operating costs, one would expect financing to be relatively straightforward.

The project level Scoping Study provides estimates for 100% of the project.

Minbos holds an 85% interest in the project and will carry in-country partner Soul Rock Ltda (Soul Rock) for a 15% interest and recover the investment made on behalf of Soul Rock from project cashflow.

The plant is forecast to expand in two stages, adding a second and third granulation circuit to reach a name plate capacity of 450,000 tonnes per annum after eigt years.

The process behind the resource

Having cut to the chase and examined the raw financial metrics that would appear to support the underlying economic viability of the project, it is important to gain an understanding of how the company plans to produce this valuable product that shall not only generate strong returns for shareholders, but assist the Angolan government in stimulating agricultural production and promoting food security within the country.

It is also important to note that the scale of the project should see Minbos well-positioned to sell its product into other countries in central Africa.

In order to appreciate the ‘how’ it is important to understand Minbos’ production strategy, while also running the ruler across the grades size of its core resource.

The Scoping Study is based on the Mineral Resource Estimate for the Cácata deposit, comprising of 27Mt (million tonnes) @ 17.7% P2O5 (at a cut-off grade of 5% P2O5).

Pit Optimisation studies have been carried out on the Mineral Resource in 2020.

The subsequent open pit design that forms the basis of the scoping study comprises 6.54Mt of plant feed mined at an average grade of 30.2% P2O5 and a strip ratio of 3.76:1 for mining over 21 years.

The production schedule assumes run of mine phosphate rock will be granulated with mono-ammonium phosphate (MAP) at the granulation plant.

The blending ratio of 84% Phosphate Rock to 16% MAP is based on the agronomic and granulation trials carried out by International Fertilizer Development Center (IFDC). 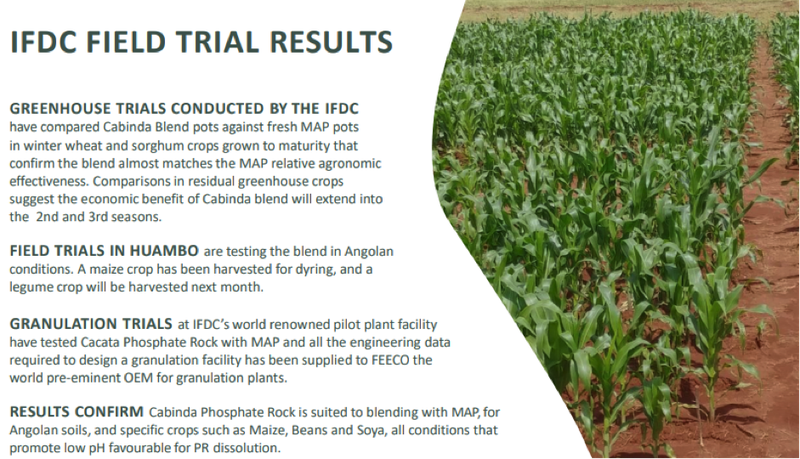 Capital and operating costs were estimated using a combination of costs built up from first principles, quotations received from contractors/suppliers and benchmarking against similar activities in Africa.

Upcoming milestones ahead of near-term production

Management is currently progressing a Definitive Feasibility Study (DFS) which will include a consideration of mine design and reserves, granulation plant design, transport and logistics and the completion of regulatory studies and approvals.

Minbos anticipates signing an off-take agreement with the Angolan Government as part of the DFS before the Final Investment Decision (FID).

Initial discussions with the Angolan Government have commenced in relation to an off-take agreement.

In its winning tender submission, Minbos proposed developing export markets for up to half the product in neighbouring countries in Middle Africa and has initiated discussion with one possible customer.

The sale price of the Enhanced Phosphate Rock (EPR) will have a significant effect on the potential cash flow of the project.

The DFS is expected to be completed within nine months with several areas currently underway.

Subject to long lead time items associated with the granulation plant which may be ordered prior to the completion of the DFS, construction is expected to take six months with first production estimated to occur shortly thereafter.

It is expected that approvals will be the critical element in the development schedule although global factors such as COVID-19 may also impact the schedule.

Based on the Scoping Study, management is of the view that there are reasonable grounds to believe that the project can be financed.

Management highlighted that the initial capital of between US$22 million and US$28 million is modest relative to the company’s market capitalisation, and the $20 billion invested by Minbos in phosphate exploration and feasibility studies in the Congo Basin region.

It is most likely that any financing would be a combination of debt and equity which may only be available on terms that are dilutive to or otherwise affect the value of Minbos’ existing shares.

Alphier Capital LLP (Alphier) has been appointed Financial Advisors to the company and it has expressed a firm view that capital can be obtained for the project.