Minbos Resources Limited (ASX:MNB) has been quick to get into gear after announcing at the start of September that it had signed a contract for the basic engineering package associated with FEECO International for the major equipment required for the planned granulation plant at the Cabinda Phosphate Definitive Feasibility Study (DFS) in Angola.

Minbos aims to produce Enhanced Phosphate Rock (EPR) as a substitute for fertilisers currently imported by the Angolan Government for distribution to wholesalers and farmers.

This should result in the development of a nutrient supply and distribution business that provides food security to Angola and the broader Middle African region.

The DFS builds on the results of the Cabinda Phosphate Project Scoping Study released on August 26 2020 which demonstrated the project to be technically and financially robust.

The +/- 35% Scoping Study estimated an after tax NPV of between US$159 and US$260 million based on a very modest pre-production capital estimate ranging between US$22 million and US$28 million.

The timetable for the DFS is as follows, highlighting the multiple share price catalysts that are on the horizon in the first half of 2021. 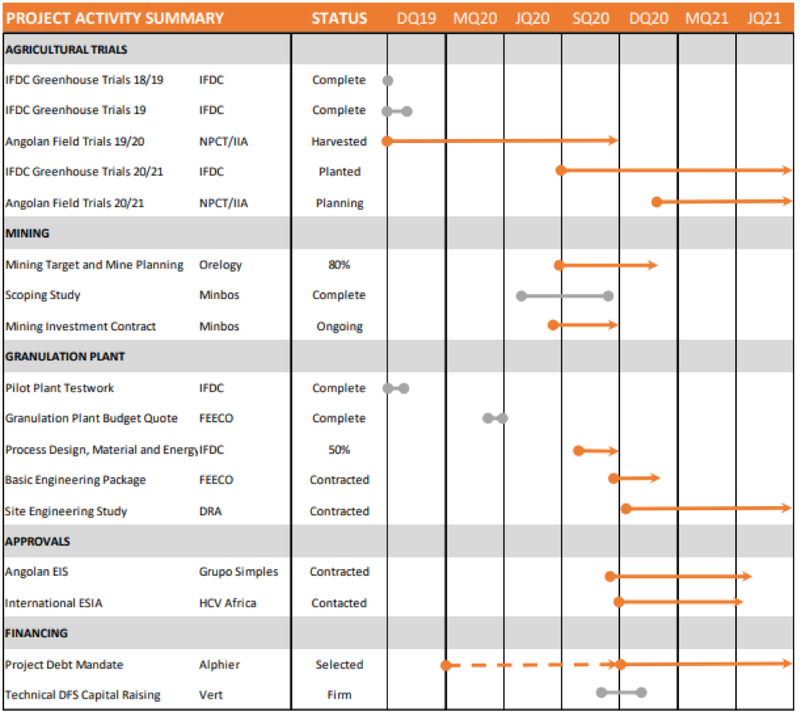 Minbos laying the foundations for DFS

Just in the last fortnight the company has ticked three more boxes on its way to completion of the DFS.

On Monday, Minbos announced the appointment of DRA Global to provide engineering and design services for the Cabinda Project.

DRA Global have been engaged to deliver all necessary study management, design, engineering and estimating work required to complete the DFS design on the Caio Granulation Plant and associated infrastructure including the plant and infrastructure layout, capital and operating costs and the construction and implementation plan.

Work is expected to take four to five months and will draw on the engineering studies being undertaken by the International Fertilizer Development Centre and FEECO International Inc. 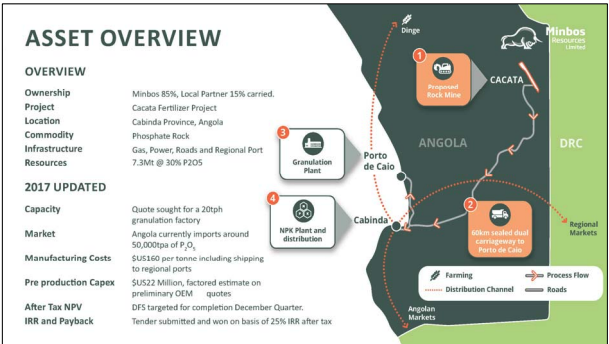 The successful completion of the ESIA reports is an important requirement for the submission of a mining licence application, integral to completing the DFS.

ESIAs completed by HCV Africa will form the basis of the previously announced environmental Impact Study (EIS) and a Waste Management Plan (WMP) to be completed by Grupo Simples.

All assessments and studies completed will comply with Angolan regulatory and international guidelines with work expected to take approximately 6 months.