Minbos delivers on all fronts as shares surge 40%

Shares in Minbos Resources Limited (ASX:MNB) surged more than 40% on Wednesday following the execution of a Mineral Investment Contract (MIC) for the Cabinda Phosphate Project located in the Cabinda Province of Angola.

While this represented a 12 month high, more importantly it was the realisation of a major milestone in paving the way for the company to complete approvals, land and access agreements, offtake agreements and an investment contract for the Caio Granulation Plant.

The key terms of the MIC are in accordance with the Mining Act in Angola and include a royalty rate of 3% on the value of phosphate rock sales, and income tax of 25% which will apply after the 8 year tax free period granted to projects in Cabinda.

As a backdrop, Minbos won an international tender for the Cabinda Phosphate Project in March 2020, highlighting the group’s swift progress in moving towards development.

The company and its in-country partner, Soul Rock Ltda (15% carried interest), won the tender based on producing Enhanced Phosphate Rock as a substitute for fertilisers currently imported by the Angolan Government for distribution to wholesalers and farmers.

Management’s vision is to build a nutrient supply and distribution business that stimulates agricultural production and promotes food security in Angola and the broader Middle Africa region.

Indeed, yesterday’s announcement that the company had executed the Mineral Investment Contract (MIC) for the Cabinda Phosphate Project represented a significant step in realising this vision.

Minbos has submitted a Technical Economic and Financial Feasibility Study (TEFFS) for the Cácata Mine, as required by the MIC, which confirms the project will move to the exploitation phase in 2021.

A few months ago, Minbos released a Scoping Study indicating that only a moderate capital expenditure of US$27 million was required to progress to production, with the payback period expected to be just 3 years.

With a mine life of 21 years, the project has an After-Tax NPV of as much as US$260 million.

MNB is currently capped at around $37 million, suggesting it is a strong value proposition on an enterprise value to NPV basis.

The Mineral Resource for its Cacata Phosphate Rock Deposit within Cabinda stands at 27Mt @ 17.7% P2O5, with 15.2 Mt at 24% in the Measured & Inferred Categories. 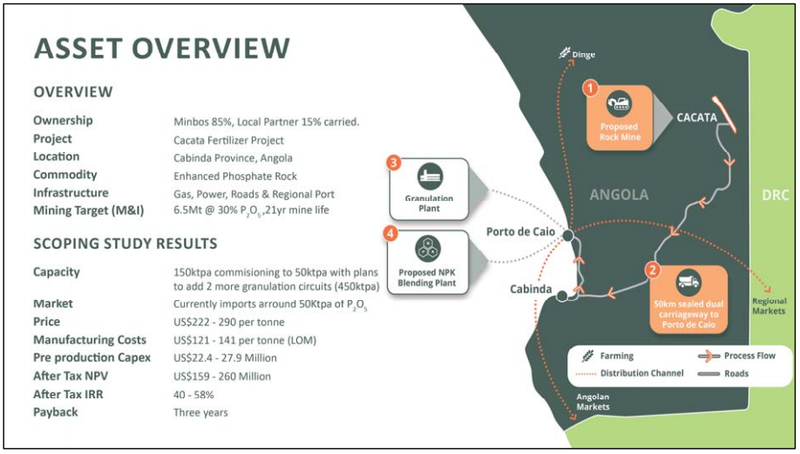 The other interesting aspect of the business is its alignment with environmental, social and governance (ESG) criteria, an increasingly important consideration for institutional and retail investors.

Commenting on this development, Minbos Chief Executive Lindsay Reed said, “Execution of the Mineral Investment Contract is an important milestone for Minbos and a real value catalyst.

‘’We are now able to move beyond the definitive feasibility study and commence implementation planning with government and stakeholders.

‘’Middle Africa has 170 million people and vast areas of arable land but not a single fertilizer production facility - this project cannot advance fast enough to keep up with the expected demand.”

Cácata is well supported by key infrastructure. The deposit is situated within a kilometre of a dual lane highway and a sixty-minute drive to Porto de Caio, a billion-dollar port and industrial development.

Porto de Caio provides the ideal location for a granulation plant with a natural gas terminal and power station within five kilometres and access to a port for barging product to local and regional markets.

This is important because fertiliser consumption on the African continent is projected to reach 13.6 million tonnes by 2030.

The following is a model of the granulation plant including hoppers and granulators, as well as the dryer and product bagging station. 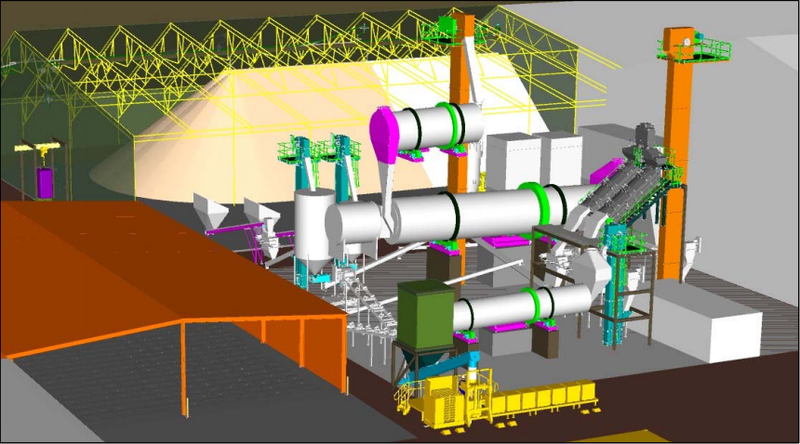 It may also mitigate the high cost of imported fertiliser, which is contributing to the issue of low crop yields.

Management has also negotiated a Memorandum of Understanding (MoU) with the International Fertiliser Development Centre (IFDC) to develop and grow the small-holder farmer market in Angola.

The IFDC is dedicated to global food production and empowering farmers to increase crop yields by using fertiliser.

Field trial activity with IFDC is already being conducted in Alabama.

MAP and CPR are being compared to Cabinda Blend in both granulated and compacted form.

The nutrients were applied to pots initially planted with Soybean which has been harvested.

The same pots (without the addition of further nutrients) have been planted with Winter Wheat which will be harvested in June, after which the pots will be planted with further crops to test the repeater effect.

In addition to the usual comparison data for the blends versus MAP and CPR at different dose rates, this experiment will provide data on the differences between compacted and granulated form, the threshold dose of MAP required to provide the starter effect and the relative performance of the Cabinda Blend in the two residual crops.

In earlier trials, the Cabinda Blend showed better relative performance in residual crops (or subsequent crops), demonstrating the potential for economic benefit beyond the first season.

The performance suggests the Phosphate (P) continues to release slowly from the CPR in contrast to Water Soluble Products which release P quickly resulting in losses to the soil.

Consequently, Minbos has gone a long way to demonstrating it not only has a robust strategic plan and the financial metrics to take its flagship project to a company transforming stage, but there is also strong and credible evidence that the product it intends to sell into a diverse range of markets in Africa is well-suited to the prevailing growing conditions.