The company generated $79.5 million from sales and underlying earnings of $22.3 million with strong cash conversion which saw the company finish the quarter with $43.5 million in cash and receivables, up from $29.5 million as at June 30, 2019.

Management confirmed that it was on track to meet 2019 production guidance in a range between 3.3 million and 3.5 million wet metric tonnes.

The company continues to receive strong prices for its product with $56.22/WMT broadly in line with the year-to-date average. 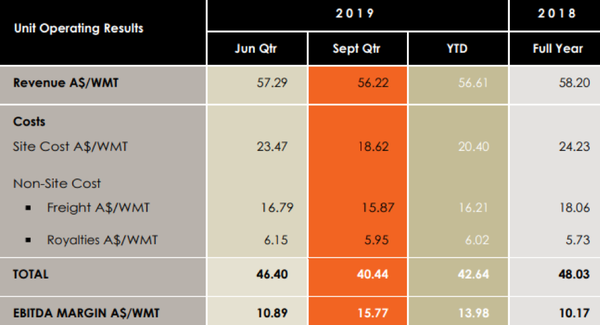 However, the real kicker from an operational perspective was the reduction in costs from $23.47/WMT in the June quarter to $18.62/WMT in the September quarter.

This was the first quarter in which the company has achieved underlying site unit costs of less than $20.00/WMT.

Management said that this was largely attributable to production exceeding budgeted levels and these economies of scale are anticipated to prevail for the remainder of the year. 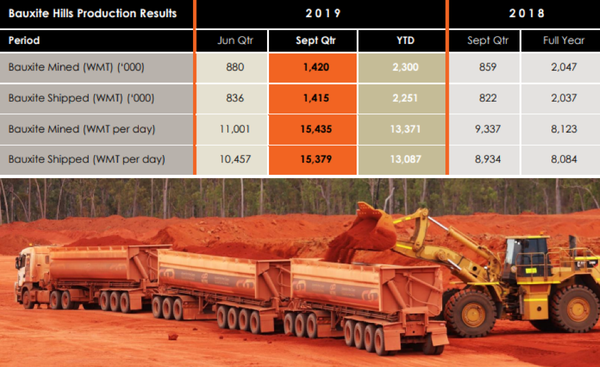 The near term impact of a substantial increase in margins makes Metro even more compelling based on its current share price, but the broader issue of increases in scale driving profitability is well worth considering in terms of the company’s long-term investment merits.

Increased scale to drive near to medium-term earnings

On this note, subsequent to quarter end, Metro announced completion of the updated definitive feasibility study (DFS) for the Stage 2 Expansion of annual production to 6.0 million WMT by 2021.

The DFS has updated the capital cost estimate using experience to date and first principles to estimate operating costs.

It also included a review of the bauxite market conditions in China.

Under such a scenario, life of mine unit operating costs are forecast to reduce by approximately 18% delivered to China, which will increase operating margins.

This will position the Bauxite Hills Project in the lowest quartile of the global cash cost curve for bauxite producers.

A significant reduction in unit operating costs can be achieved by the use of a floating terminal that can load larger, ungeared ocean-going vessels including Cape Size vessels.

Management’s negotiations with debt providers are well advanced and a final decision to proceed will follow finalisation of the funding package and completion of the detailed engineering and design with the latter expected in November.

Consequently, substantial share price catalysts regarding the company’s near term expansion are imminent, and this combined with December quarterly production and sales could well see the company’s shares begin to reflect its robust financial position and growth prospects.

While management hasn’t changed its shipping guidance of between 3.3 million and 3.5 million WMT, maintaining the same run rate as that achieved in the September quarter would translate into shipped bauxite for 2019 of more than 3.6 million WMT.

Should management continue to outperform at the production and shipment levels while driving down costs, the much improved financial and operational metrics should also provide share price momentum.

Given the factors that have contributed to the group’s impressive production and shipping rates will continue to benefit Metro, as we highlight below it would appear that the recent outperformance is sustainable.

Daily mining rates trended higher during the quarter, driven by high mechanical availability (+90%) of mining and haulage equipment and ore being sourced from both the BH1deposit and (closer) BH6 deposit, reducing the average haul distance.

Bauxite stocks at port and on water at quarter end were approximately 68,000 tonnes, leaving Metro well positioned to meet its production guidance.

The decision to move to an owner operator model continues to be highly successful generating the planned efficiencies and cost reductions across the business.

Some engineering modifications at the Barge Loading Facility were completed to the overland conveyor system which resulted in record barge loading rates being achieved in September.

Transhipping activities are currently benefitting from good weather conditions and seasonal high tides which prevail towards the end of the calendar year.

With productivity of the crane operators continuing to improve with experience since operations commenced, and the return of Ocean-Going Vessels which have previously performed strongly, ship loading rates are now operating consistently above budget.

Price and demand outlook for bauxite continued to be positive during the quarter despite the temporary closure of alumina refinery capacity in Shanxi Province after environmental audits by Chinese authorities.

China’s August bauxite imports were down 4.5% to 8.6 million WMT (month-on-month) as output from Guinea fell, due to their wet season which disrupts loading operations, however the first eight months import total reached 71.3 million tonnes which was up 30.8% (year on year) reflecting strong demand from refineries.

Inland refineries have continued to diversify their bauxite supply and buy product from imported sources.

As indicated below this is the first time that the proportion of production from domestic bauxite has fallen below 50%, and it is worth noting that it has fallen steeply since the start of 2019 when it accounted for 61%. 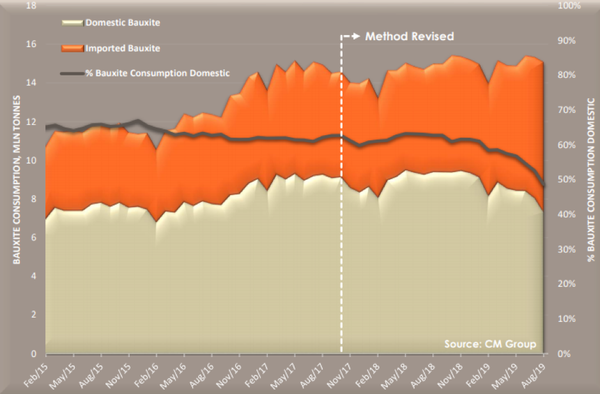 China’s domestic bauxite prices in Henan and Shanxi remained relatively stable with price support being generated from an increasingly strict environment policy in the lead up to China’s 70th anniversary celebrations, counterbalanced by increasing imports going to inland refineries.

It is difficult to see the landscape changing in terms of imposing stricter environmental regulations on domestic bauxite producers, potentially driving down the supply of local product, effectively increasing demand for overseas producers such as Metro Mining. 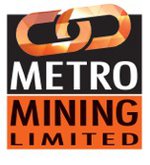