Metminco Limited (ASX:MNC), has received the final tranche of assays for the 2019 Chuscal drilling program which consisted of four diamond holes, representing the first drilling to occur at the Chuscal Prospect, part of the Mid-Cauca Porphyry Belt of Colombia.

Management viewed the results as ‘significant and pleasing’, which in the context of a maiden drilling program targeting a large porphyry/epithermal system, this particularly refers to the increased understanding that the company now has of the geological features that are at play in the Chuscal prospect.

Chuscal is a gold porphyry and vein target within the Quinchia Project which also hosts the Tesorito Prospect and the established Ore Reserve at Miraflores, all within a 2 kilometre radius as indicated below. 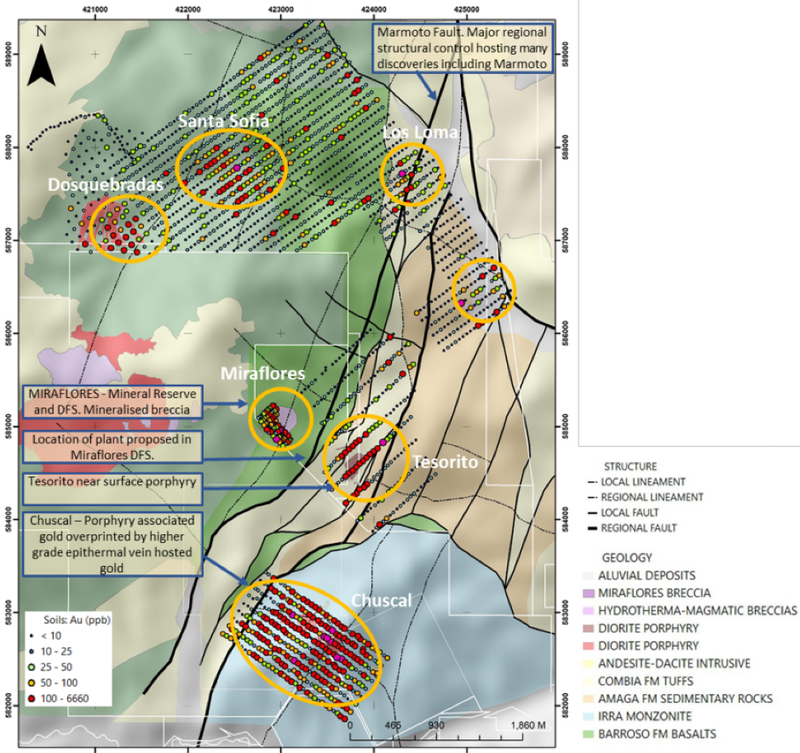 The final hole (CHDDH004) of the 4 hole Chuscal program was designed to complete the first pass testing along the core of the 900 metre strike of the Chuscal gold in soil anomaly and to demonstrate continuity of regional gold bearing structures by testing the 500 metre interval between holes CHDDH002 and CHDDH003, both of which encountered porphyry associated gold and vein hosted gold.

Drill hole CHDDH004 intercepted regions of vein gold at depths predicted in the regional structural model, adding weight to the validity of the model for the distribution of epithermal vein related gold and silver.

The best result of 8 metres at 1.6 g/t gold was encountered near surface and correlated to the Guayacanes corridor which hosts a series of horsetail faults containing old artisanal workings.

There are several theories associated with the underlying geological events that have impacted what management believes is a big and complex system.

On this note, managing director Jason Stirbinskis said, “We are interested in better understanding the controls to high grade gold mined by artisanal and CBM (carbonates and base metals) veining which is the primary vein style carrying high grade gold at Continental Gold’s Buritica project located to our north and at other projects within the Mid-Cauca belt.

‘’Developing an understanding of stages associated with gold mineralisation and development of a 3D geological model of Chuscal will contribute to better future targeting.

It is also our understanding that geochemical profiling, of which the above is an example, has not been applied to Miraflores or Tesorito by previous explorers and developing a better understanding of gold distribution within these deposits will be part of the early 2020 program”.

It is worth noting that Metminco’s Miraflores deposit which lies to the north and is situated in close proximity to established large gold mines has a gold resource of 877,000 ounces (9.3 million tonnes at 2.8 g/t gold), including a reserve of 407,000 ounces gold.

The high profile mines located in relatively close proximity can be seen below. 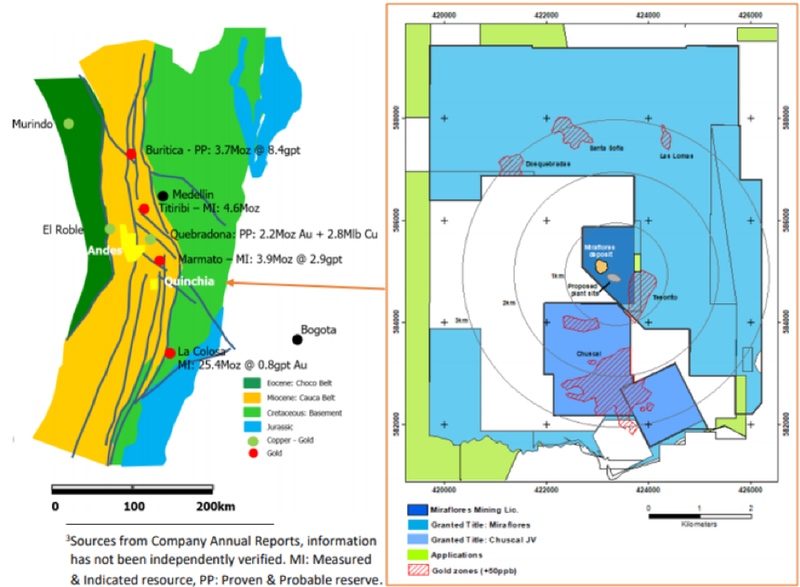