Metminco Limited (ASX: MNC) today announced that the first hole of the maiden drilling program to test the Chuscal Gold Target has been completed after passing through significant hydrothermal alteration and breccia system.

The Chuscal Gold Target is a JV with AngloGold Ashanti Colombia SA. Metminco can earn 51% through US$2.5M of exploration expenditure. Metminco is the manager of the JV.

The first hole of the maiden drilling program was completed at a depth of 452.5m, after being extended by approximately 100 metres based on the encouraging visual observations from the drill core by the team on-site. The drill hole passed through a very encouraging sequence of ~274m of hydrothermal alteration and breccias. This started from 212m extended down to 410m before eventually transitioning to weakly altered monzonite.

The company re-iterates that the extent of hydrothermal alteration, particularly in the breccias containing sulphides and overprinted by Intermediate Sulphidation (ISS) veinlets bodes well for the presence of gold mineralisation.

However, the variability of lithologies plus the intensity and type of alteration, together with overprinting mineralisation styles in the hole, makes it difficult to anticipate the likely grades of gold by visual inspection.

“The first hole intersected a zone of strongly altered monzonite and diorite from 136m before passing into an extensive zone of hydrothermal breccias and magmatic breccias with overprinting by epithermal veinlets from 212m down to 410m. We are eagerly awaiting the assay results to know which parts or if all of this 274m zone is related to the generation of the extensive surface gold anomaly.”

The first samples from CHDDH001 were despatched last week to ALS laboratory in Medellin for assay. A second batch will be despatched this week on completion of the geologic logging of the core.

From there, Metminco anticpate a strong flow of assay results from late-November 2019 through to February 2020.

The second hole of the program, CHDDH002, will also test the eastern end of the large surface geochemical anomaly and pass underneath the historic workings to investigate the core of the diorite zone and its potential extension to the north-northwest. The hole is designed to intercept the Guayacanes structure which consists of gold bearing veins within the mineralised diorite porphyry.

These delivered gold grades of up to 250gpt with 10% of samples having grades over 10gpt (average grade 62.7gpt). The higher gold grades are associated with two or three vein systems with elevated silver (up to 59gpt) and associated arsenic, antinomy, tungsten and tellurium. In the cross-cuts between these veins, continuous lower grade (1gpt to 3.9gpt) gold mineralisation is present.

Stirbinskis said, “We are off to a strong start at Chuscal, with visual observations demonstrating better than expected geology, and we eagerly await the first batch of assay results within the next few weeks, whilst we press-on with drilling at the 2nd drill location.” 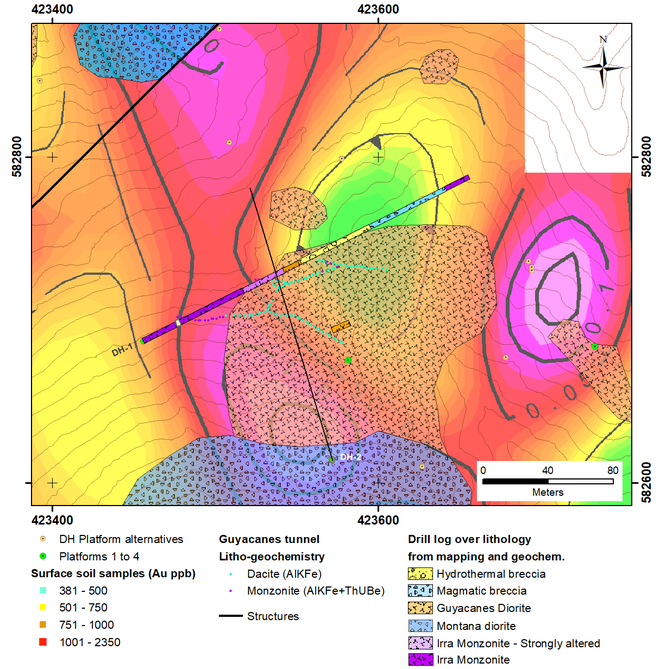 Drill hole CHDDH001: Simplified lithology projected to surface over interpreted position of dioritic intrusions. This is presented over an image of Analytical Signal derived from ground magnetic data. The proposed platform and drill hole trace of CHDDH002 is also indicated.

Today’s announcement follows a progress update from the company last week along with news that the company intends to change its name to “Los Cerros Limited”, marking the reinvigoration of the company after the recent merger with Andes Resources.