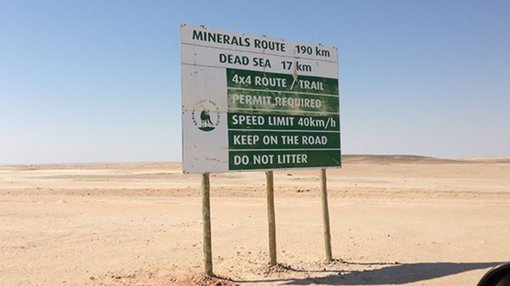 Graphite exploration and development company, Metals Australia (ASX:MLS), is positioning itself to capitalise on the global transition to renewable energy and adoption of lithium-ion batteries as a means of energy storage. High-value raw materials, including graphite, are expected to see continued long term demand, especially as processing plant closures continue in China, placing upward pressure on graphite prices.

The company was last week awarded all permits required to complete its maiden diamond drilling program at the Lac Rainy Graphite Project, located in Quebec, Canada, and it recently awarded the drilling contract to Magnor Exploration Inc. to complete the program at the project.

The Lac Rainy Graphite Project covers an area of more than 4600 hectares representing 88 mineral claims and is contiguous with Focus Graphite’s (TSX-V:FMS) property to the southwest, which hosts the Lac Knife Graphite Deposit, containing a Measured and Indicated Resource of 9.576 Mt at 14.77% graphitic carbon (Cg) and an Inferred Resource of 3.102 Mt at 13.25% Cg at a 3.0% Cg cut-off.

The project is located in one of the premier graphite geological regions of Quebec, sitting 22 kilometres south-west of the historic mining town of Fermont. Road networks link Lac Rainy with the major ports along the St Lawrence River in Quebec offering a route to the seaborne market as well as the North American and South American markets.

Metallurgical testwork completed on Lac Rainy graphite demonstrated that a commercial-grade graphite concentrate can be produced, including:

The recently completed channel sampling campaign has identified that Lac Rainy is host to extensive wide zones of high-grade natural flake graphite mineralisation with the information obtained from that program providing MLS with significantly more detailed geological information regarding the width and continuity of high-grade graphite mineralisation. 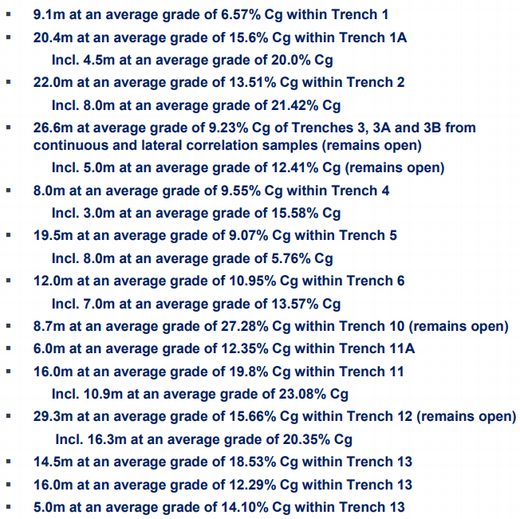 Based on the results of the channel sampling campaign, the company is now moving into its Phase II exploration program of diamond drilling which will be designed to test the mineralisation down-dip and define an initial resource.

The Phase II work program will initially comprise up to twenty diamond drill holes, for a total of up to 2800 metres of drilling. This is an increase on the number of metres previously considered following the recent success of the channel sampling program, and it can still be further expanded.

The diagram below outlines the proposed drillhole location and direction, overlaid with the airborne EM geophysics: 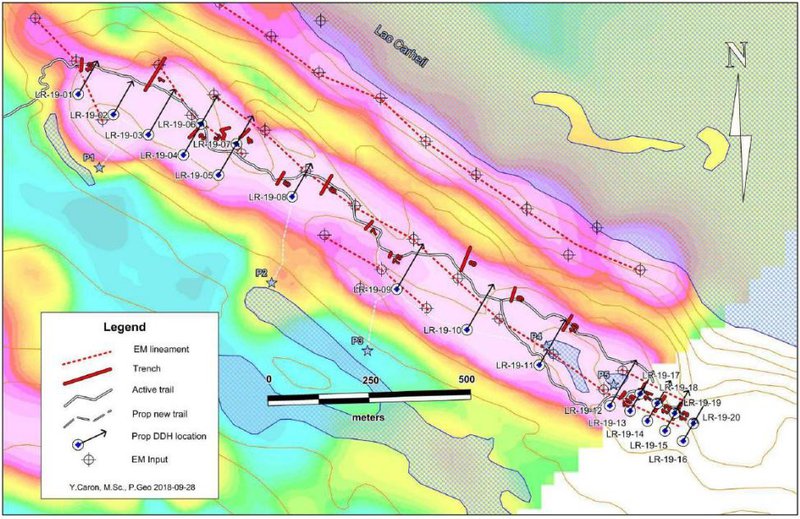 It is expected that approximately 1000 samples will be generated by the drilling, which will be assayed for graphite (total carbon and graphitic carbon), iron and sulphur. The diamond core samples will be submitted for petrographic analysis to obtain further information about the graphite mineralisation and the graphite flake size distribution.

The drilling program will be completed with one drill rig with the entire program expected to take up to eight weeks to complete. It will include one week of site preparation works, including access tracks, drill pads and equipment mobilisation, followed by four weeks of drilling and two weeks of sample preparation, site rehabilitation and equipment demobilisation, plus a week is for any contingency related matters.

Bridge and road infrastructure have been maintained and cleared of snow providing safe entry and access across the project.

“Our recently completed channel sampling campaign at Lac Rainy has successfully defined extensive wide zones of high-grade natural flake graphite mineralisation. In addition, trenching has successfully identified a Southeast and Northwest extension of the known high-grade Carheil Zone. Adding the new Northwest and Southeast extensions, including historic high-grade Cg occurrences, the Carheil Zone has a potential economic envelope of 3.2 kilometres in length by 10m to 45m in width.

“The planned drilling program will comprise of up to 2,800m and will be designed to test the down-dip / plunge extensions of the graphite mineralisation. Our current program will provide us a platform to delineate an initial resource and build on the potential scale of the Lac Rainy project.

“Previous exploration undertaken has demonstrated that Lac Rainy has the necessary attributes to potentially make it a world-class graphite deposit, including exceptional metallurgical test results, proximity to key infrastructure and end-user groups on its door step. Grade and purity are key in the graphite market and Lac Rainy is delivering on both measures, exceeding our expectations.

“We look forward to providing shareholders with further updates in what will be a busy 2019 for our company.”