Less than a fortnight after announcing that it had earnt a 30% interest in the Werner Lake Sulphide Cobalt Project, Marquee Resources Ltd (ASX:MQR) has entered into a non-binding Memorandum of Understanding (MoU) regarding a cobalt-copper offtake agreement with Zhejiang Meidu Haichuang Lithium Battery Technology Company (China Hitrans), a subsidiary of Shanghai Stock Exchange listed Meidu Energy Company Ltd.

The Werner Lake Sulphide Cobalt Project is in Ontario, and as it is still in the exploration phase there is no guarantee that it will proceed to commercial mining operations.

Consequently, formalisation of the binding offtake agreement is contingent on Marquee progressing to commercial production.

In the course of progressing the agreement, Marquee will provide China Hitrans with a metallurgical sample for independent testing within the next 3 months.

China Hitrans will work together with Marquee to design the best products to be the potential feed for the group.

Notwithstanding the conditions pre-requisite to finalising a formal offtake agreement, this is an important development for Marquee given the high profile status of the prospective client.

Managing director Charles Thomas also noted interest from other users in saying, “Signing this type of agreement at this stage of development is another very important milestone for the company.

“The interest shown by numerous Chinese end users demonstrates the strong appetite for cobalt and in particular the potential product that Werner Lake could deliver.

“One thing that was evident from our China visit was the strong demand for cobalt sulphide projects, such as Werner Lake.”

Given Marquee has a 30% stake in the project, the agreement only applies to that portion of its interest.

China Hitrans is a high-tech enterprise that develops, produces and sells ternary cathode materials and ternary precursors of lithium batteries.

The company occupies an area of 300 acres and has more than 250 employees.

In 2017, it achieved an operating income of 470 million yuan, and successfully succeeded in the top 100 industrial enterprises of the economic and technological development zone.

The sales volume of the products jumped to the top 10 in China, and won the two awards of “Top 10 Brands of Power Lithium Battery Cathode Materials in China” and “2017 Most Investment Value Award of Lithium Battery in China”.

This would suggest that there will be significant demand for the commodities produced by Marquee.

The MoU confirms the positive response to Marquee’s marketing strategy in China, and as such this news should be well received by the market.

There is another potential share price catalyst in the wind with drilling results expected shortly.

Marquee is confident the assays received from this drilling campaign should increase the existing NI 43-101 Resource of 79,400 tonnes at 0.43% cobalt. 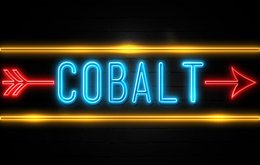