Chalice’s discovery was a company-and transforming event, and given the company has been highly successful with subsequent exploration in the area, it is not surprising that neighbouring miners are upbeat about their prospects.

The significance of the Julimar discovery and ongoing exploration success is reflected in the company’s outstanding share price performance in 2020/2021.

The likelihood of a major discovery first became evident from drilling results released in late March, and this was confirmed in mid-April.

The company’s shares were trading in the vicinity of 40 cents in late March 2020, and since then they have surged more than 2000%, recently hitting an all-time high of $9.34.

Given this backdrop, it is fair to say that early-stage exploration activity, and more importantly Mandrake’s upcoming drilling program that starts in less than a week at the group’s Newleyine Project (see below) are much-anticipated events. 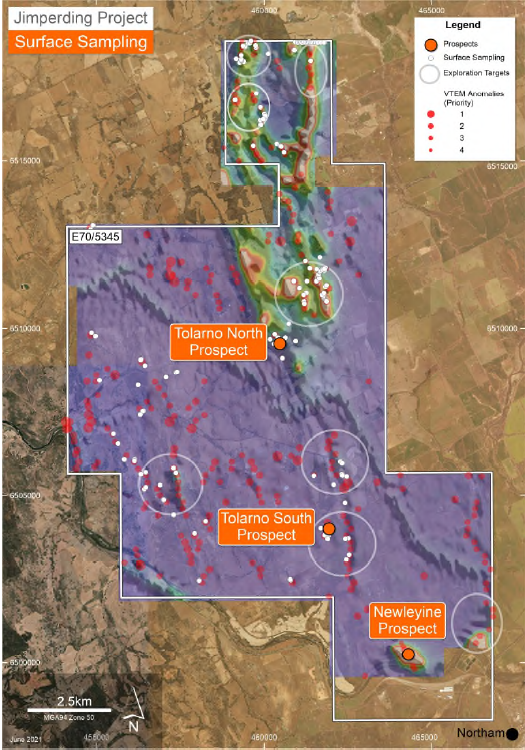 Discussing today’s news and the upcoming drilling program, Mandrake managing director James Allchurch said, “The discovery of two ultramafic bodies at the Jimperding Project with highly anomalous Ni, Cu and Pt values coincident with EM conductors is an exciting development for the company.

"Mandrake now has a pipeline of prospective Julimar-style Ni-Cu-PGE prospects with drilling at the most advanced prospect, Newleyine, commencing 14 June 2021.”

Ahead of the drilling program, management has released some promising information regarding the other two prospects shown above, Tolarno North and Tolarno South.

Of particular interest were chip results at the new Tolarno North prospect of 0.31% Ni, 503ppm Cu and 20ppb Pt as they confirmed the prospect for potential PGE-nickel-copper massive sulphide mineralisation.

Deficiencies were identified in the 1:250,000 scale GSWA mapping of the area which appears to have heavily relied on air-photo interpretation in less accessible parts of the project area.

Both of these prospects are located on property owned by the same landowner with discussions underway to facilitate access to conduct a more detailed assessment.

These prospects have not been the subject of previous work.

While the true extent of the ultramafic intrusive is unclear, the initial geochemical signature and coincident EM (electromagnetic) anomalism indicates the potential prospectivity of Tolarno North for PGE-Ni-Cu mineralisation.

Further work is warranted at Tolarno North, including more detailed mapping and sampling together with ground EM and potentially an aircore program to better characterise the geochemistry and generate drill targets.

Further work would include ground EM and an aircore program to better characterise the geochemistry.

Mandrake noted that the Tolarno South paddock will not be cropped this year which will make it more amenable to drilling in the short term.