Mako’s shares soar on back of assay results

Shares in Mako Gold Ltd (ASX:MKG) traded as high as 11 cents on Thursday morning, up 26% on the previous day’s close.

This was in response to highly promising assay results from the first 16 holes of the company’s 27 hole reverse circulation (RC) drill program at the group’s Napié Project in Côte d’Ivoire.

This constant flow of promising news sees the company trading some 40% above where it was trading at only a month ago.

The exploration results have doubled the length of the gold mineralised zone from 500 metres to 1 kilometre on the Tchaga Prospect, along the interpreted 17 kilometre long shear as indicated below. 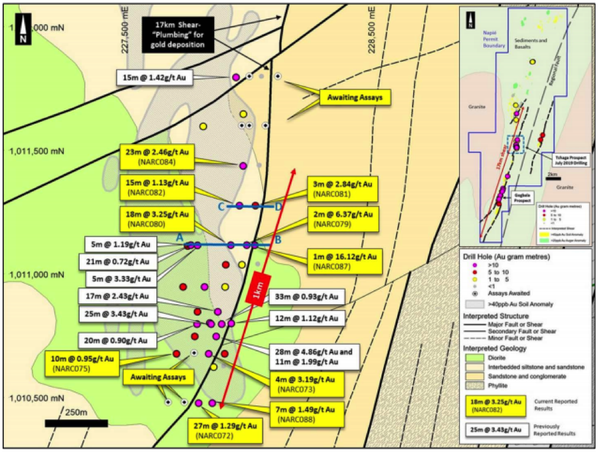 Importantly, these results have been achieved simply through shallow drilling, and traditionally the broader region hosts high-grade mineralisation at depth.

As indicated below, there are multi-million ounce projects surrounding the Napié Project which are being operated by some of the world’s largest miners. 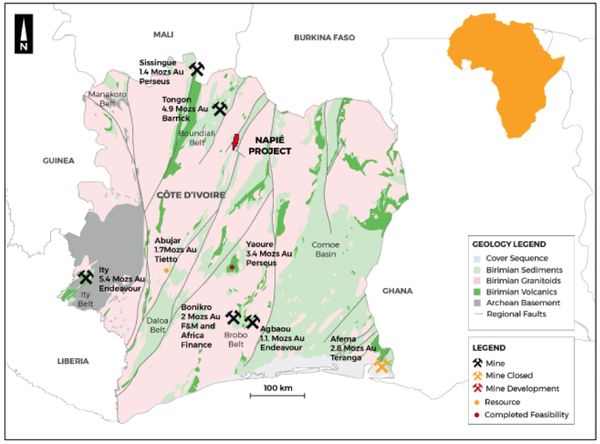 Potential for extension of mineralised zone

Significant drill intersections encountered to date are spatially related to gold soil anomalies coincident with the 17km-long interpreted shear, which is sub-parallel to the deep-seated regional fault that extends through Côte d’Ivoire north into Burkina Faso.

Assay results from the final eight holes on the Tchaga Prospect are imminent.

Positive results from the remaining drill holes may further extend the mineralised zone on Tchaga, a development that could provide further share price momentum.

Management’s decision to undertake a small regional drilling campaign may also pay dividends as it could point to new mineralised zones, or ideally provide additional evidence that the Tchaga prospect and the Gogbala prospect are part of the same system with both lying along the 17 kilometre shear. 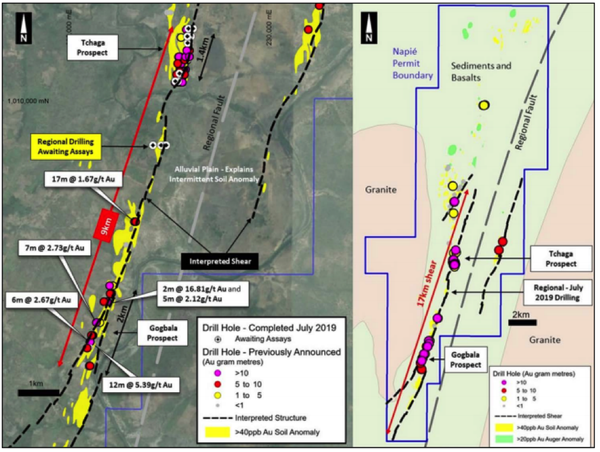 Consequently, assay results from regional drilling could also be a share price catalyst.

Highlighting the significance of both the Tchaga and regional drilling, Mako’s managing director Peter Ledwidge said, “We are encouraged by the results received to date from our recent drilling program on Tchaga which has doubled the strike length of gold mineralisation and further enhanced the potential of the project.

‘’We eagerly await the remaining assay results from our Tchaga drilling which may extend the mineralised trend even further, as well as our regional drilling results."