The company is seeking to raise more than $2 million, to ensure a strong financial platform for the group to undertake an extensive drilling campaign at its Napié Project.

The Napié program will consist of approximately 3600 metres of reverse circulation (RC) drilling to infill and test the strike extent of the broad zones of high-grade gold mineralisation identified to date.

This is a much anticipated development given that previous drilling at Napié intersected multiple zones with significant widths and grades of gold mineralisation with individual 1 metre assays up to 29.89 g/t gold, and separately widths up to 28 metres at 4.86 g/t gold.

As indicated below, the recent geophysical reinterpretation identified a long shear zone of more than 17 kilometres coincident with a gold soil geochemical trend. 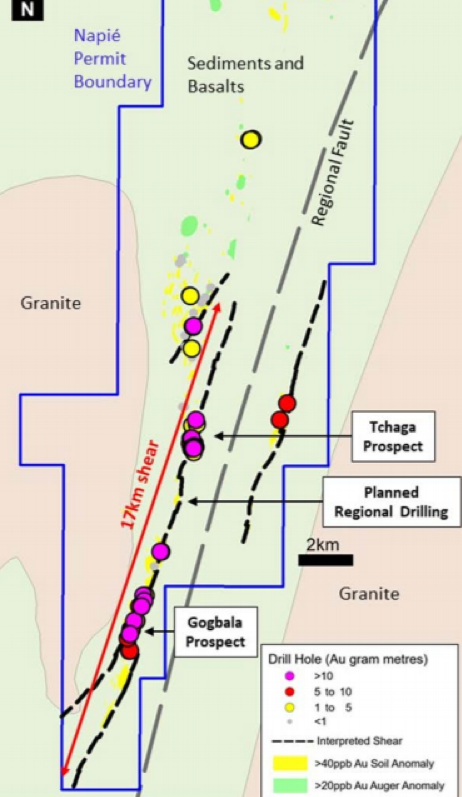 Positive drill results received to date on both the Tchaga and Gogbala Prospects are located along this interpreted shear and gold soil trend.

The planned drilling program will concentrate on areas proximal to the mineralised shear on the Tchaga Prospect, as well as regionally testing the undrilled areas along the interpreted shear between the Tchaga and Gogbala prospects.

As indicated below, Napié is surrounded by multi-million ounce deposits operated by the world’s largest gold mining companies. 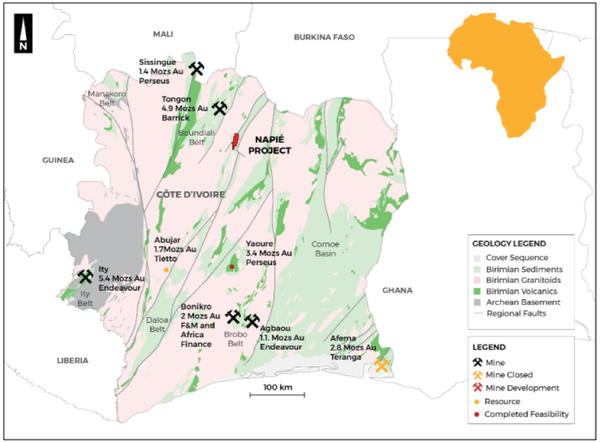 Consequently, the area under exploration can only be described as highly prospective, and one where drilling success tends to boast big numbers in terms of grades.

The last round of drilling at the Tchaga prospect which lies at the northern end of the 17 kilometre shear delivered highly promising results along a 500 metre strike.

The best drill results, which returned significant widths and grades of gold mineralisation were concentrated in proximity to what is termed a dilational jog (believed to be good areas for deposition of gold) in the newly identified 17 kilometre shear zone and coincident gold soil anomaly.

The purpose of the current RC drilling program on Tchaga is to extend gold mineralisation over a strike length of 1.4 kilometres by targeting the dilational jog as indicated below. 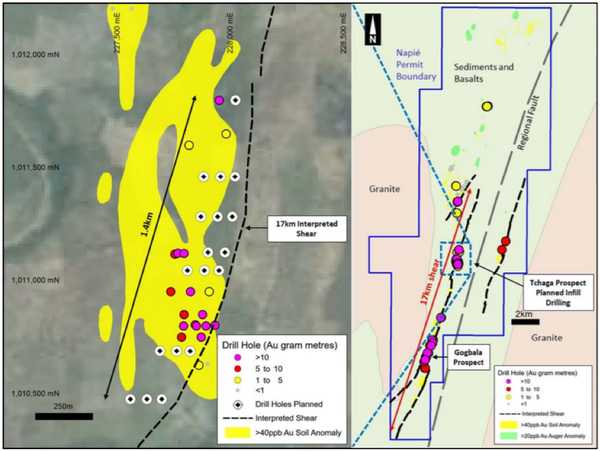 Approximately 2700 metres of RC drilling is planned on the Tchaga Prospect with planned holes and previous drill results are shown above.

Mako’s aim is to identify connecting mineralisation between the Tchaga and Gogbala Prospects which lies to the south.

Significant gold intersections on the Gogbala Prospect from drilling to date include 12 metres at 5.4 g/t gold and 17 metres at 1.7 g/t gold, as well as a smaller high grade, near surface intercept of two metres grading 16.8 g/t gold from only 2 metres downhole.

Commenting on the upcoming strategy, Mako said it is now of the view that gold mineralisation intersected at the Tchaga Prospect and the Gogbala Prospect, are part of the same system and both lie along the newly interpreted 17 kilometre long shear zone.

Mako will also undertake regional drilling, testing for gold mineralisation at select high-priority targets, and it will increase the total strike length drilled on wide-spaced fences to 9 kilometres along the 17 kilometre long shear.

This will allow management to focus on the most prospective areas along the shear in future drill programs.

Approximately 900 metres of RC drilling is planned on regional drilling.

Highlighting the potential upside from near-term exploration, managing director, Peter Ledwidge said, “We are pleased to be drilling again on the Napié Project in Côte d’lvoire.

“The current drilling campaign aims to extend mineralisation to 1.4 kilometres on the Tchaga Prospect, which we view as the next step to progress towards a resource, and to highlight the “blue sky” along 9 kilometres of the 17 kilometre interpreted shear, thereby demonstrating the potential for one or more large gold deposits along the shear.”