Mako ready to strike as drilling commences at Tchaga

With the wet season now behind it, African gold mining group Mako Gold Ltd (ASX:MKG) is poised to start its much anticipated exploration campaign, building on the high grade drilling results achieved over the last 12 months, and of course the all-important discovery at the Niou Project.

Management informed the market today that the company had recommenced drilling at the Tchaga Prospect on the Napié Project in Côte d’lvoire, its key focus in the coming months.

Mako will be following up on previous high-grade intercepts including 28 metres at 4.9 g/t gold.

Upcoming work will include infill drilling on previous sections and along the one kilometre mineralised strike length that was extended following the last round of drilling.

As well as offering the prospect of further positive drill results which could add to the strike length, the exploration program will add confidence in management’s geological modelling.

On this note, Mako’s managing director Peter Ledwidge said, “We are excited to be drilling again on the Tchaga Prospect.

The results of this drill program should help unlock another piece of the puzzle of our geological modelling of gold mineralisation and bring Mako closer to a resource on the Tchaga Prospect.” 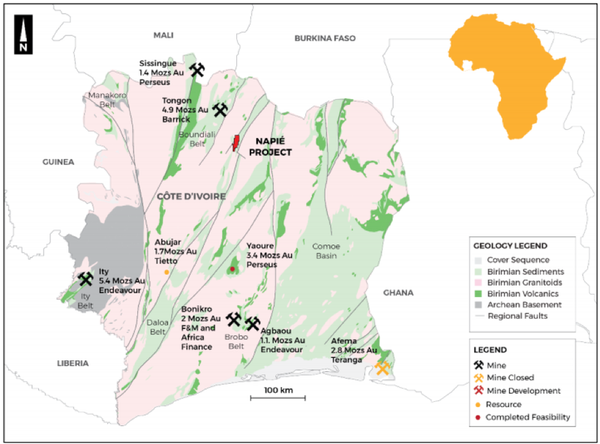 Importantly, Mako recently negotiated a highly beneficial agreement with Geodrill which will maximise drilling metres and preserve cash during the upcoming campaign.

This is an important development as Geodrill has partnered with Mako’s management team in the past, having drilled on previous discoveries together in Burkina Faso where the Orbis Gold Project progressed to become a major producing mine.

Geodrill’s decision is significant in that the group has a strong working knowledge of the characteristics of promising early stage orebodies in Africa.

Further, the group’s decision to drill for equity is a show of faith in Ledwidge and his team who have successfully worked with Geodrill in the past.

Discussing this agreement, Ledwidge said, “We are extremely pleased to have secured a drill-for-equity agreement with such a high-calibre drilling company.

‘’We have a long-standing relationship with Geodrill and have always been impressed with the quality of their work.

‘’It will be a great endorsement for Mako to add Geodrill to our share register, since they have worked in West Africa for so many years and understand junior exploration companies better than most.

‘’We look forward to continuing and strengthening our relationship with Geodrill, which should be beneficial to all Mako shareholders.”

What to expect at Tchaga

Mako will focus on the more advanced Tchaga Prospect in its endeavour to better understand the gold mineralisation and to help move towards outlining a JORC compliant gold resource.

The program consists of approximately 2000 metres of reverse circulation (RC) drilling on the Tchaga Prospect shown below in the dashed pink circle. 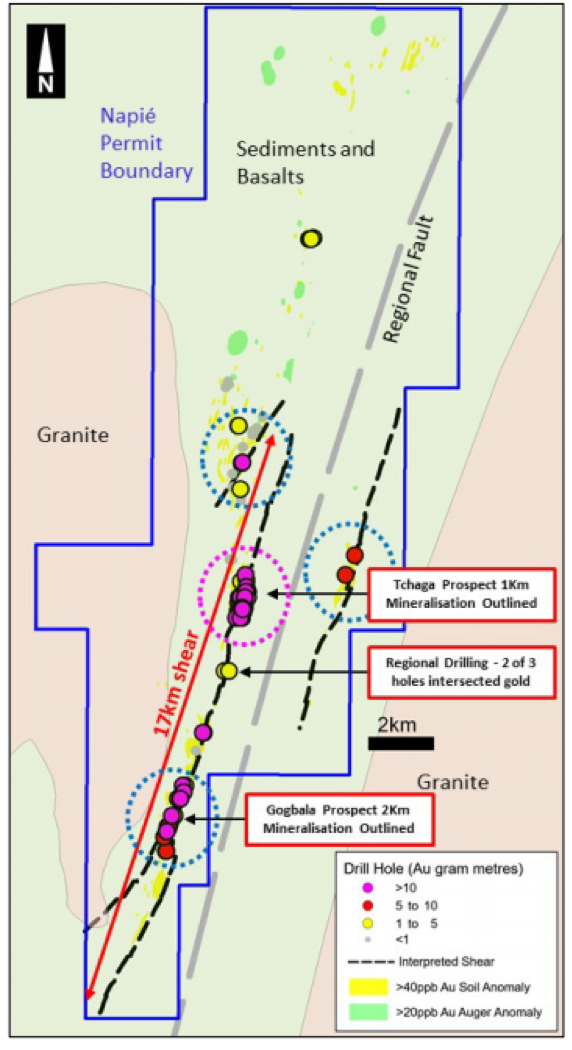 The Tchaga Prospect is associated with a +40ppb gold soil anomaly and is located along the long shear zone of more than 17 kilometres thought to be a major control for gold mineralisation.

Three other specific targets, shown in the above map as dashed blue circles host significant gold intercepts from previous RC drilling and these will be tested in follow-up drill programs.