Today’s release of Mako Gold Ltd’s (ASX:MKG) quarterly result for the period ending 30 June 2019 comes at a pivotal time for the group, as it has released outstanding drilling results in July with the potential for more positive news to emerge as further assays are processed.

Assays results from the final eight holes on the Tchaga prospecthave the potential to further extend the mineralised zone.

The Tchaga prospect is part of the Napié Project in which Mako has an interest of 51%. Under a farm-in and joint venture agreement with Occidental Gold SARL, a subsidiary of West African gold miner Perseus Mining Ltd (ASX:PRU , Mako can increase its stake from 51% to 75%.

The quarterly report has provided updates on both the Napié Project in Côte d’Ivoire and the Niou Project in Burkina Faso. 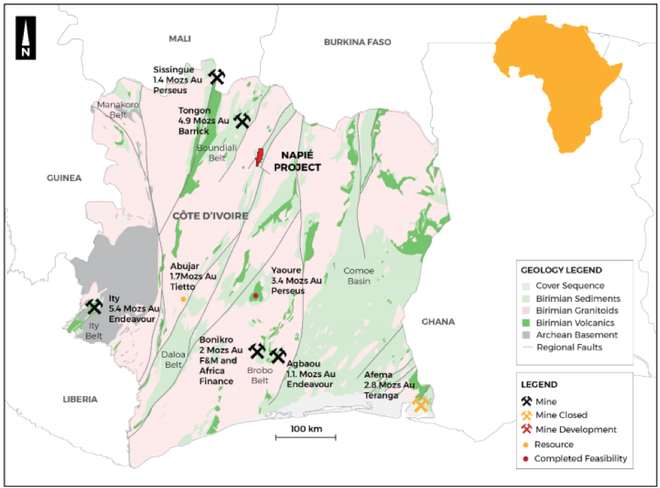 These attributes haven’t been lost on the investment community with major ASX listed gold producer Resolute Mining (ASX:RSG) having a 19.9% stake in Mako.

Of further significance is Peter and Ann Ledwidge’s stake of nearly 10%, indicating they have plenty of skin in the game.

It is worth noting that Ann Ledwidge is a geologist and when I had the opportunity to discuss the project with her at the Noosa Mining Conference she was able to provide significant technical information on Mako’s tenements, as well as the broader region which she is familiar with through previous experience.

From an exploration perspective, 24 reverse circulation (RC) drill holes were completed for a total of approximately 3670 metres on the Tchaga Prospect.

In addition, three RC holes were completed on the regional trend for a total of 480 metres drilled to test mineralisation between the Tchaga and Gogbala Prospects.

The purpose of the regional drilling is to test the interpreted shear in an undrilled area between the gold mineralised Tchaga and Gogbala prospects.

Management suspects that gold mineralisation intersected at the Tchaga Prospect and the Gogbala Prospect, are part of the same system and both lie along the recently interpreted 17 kilometre-long shear zone.

Hole locations from the regional drilling program and select previous drill results that are shown below tend to support management’s conclusions. 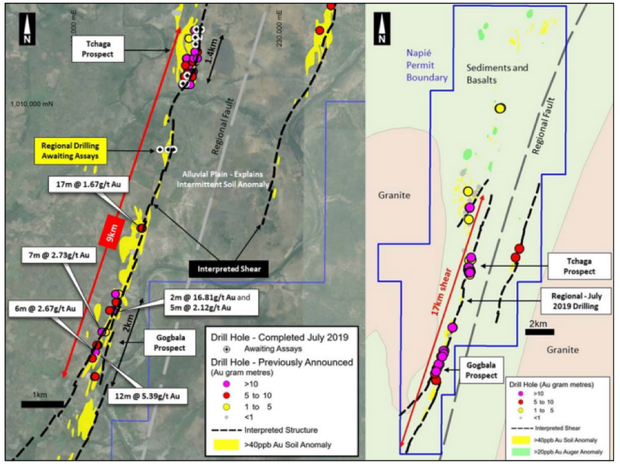 This would be highly significant given that gold intersections from the Gogbala prospect have featured promising widths and high grades, including 12 metres at 5.4 g/t gold, 17 metres at 1.7 g/t gold and 2 metres at 16.8 g/t gold.

However, not accounting for the outcome of future assays it has been a highly successful drilling campaign.

The program was designed to extend mineralisation outlined over a 500 metre strike length by previous drill programs, and even based on current assays, the strike length has been doubled to 1 kilometre.

Newy Niou could be diamond in the rough

Further upside could stem from drilling at Niou in Burkina Faso, which is likely to commence towards the end of the year after management recently completed a geological mapping program.

Drilling will follow up on assay results delineated from the maiden drilling gold discovery in January 2019 which included 15 metres at 2.3 g/t gold, 24 metres at 2.7 g/t gold and 3 metres at 18.9 g/t gold.

As shown below, the planned reverse circulation (RC) and/or diamond drilling (DD) program will target extensions from the best gold intersections in NURC005, NURC006 and NURC007 from the recent maiden drilling program. 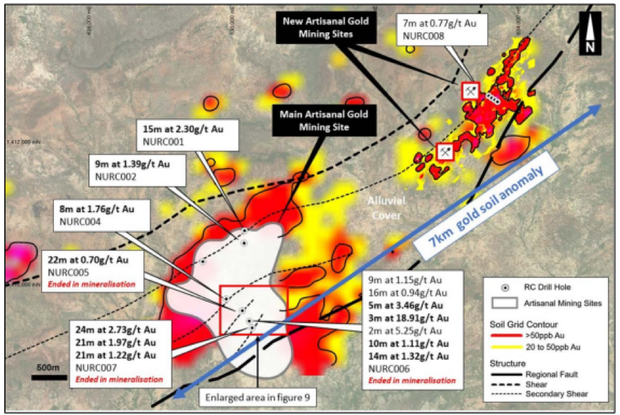